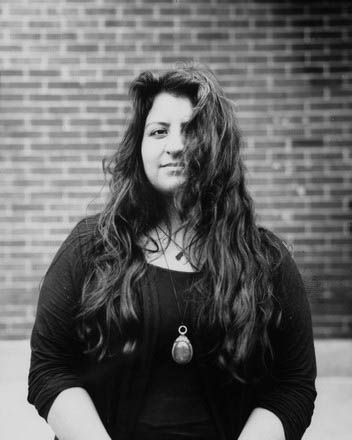 After graduating from Grand Valley State University in 2011, photographer Rosa Maria Zamarron has not backed down from a challenge as she pursues her career in documentary photography in Southwest Detroit. Recently, her work was featured in Vogue, one of America’s top fashion and lifestyle magazines.

As four indigenous women stood in the place of what once was the Christopher Columbus monument, Zamarron snapped a photograph that moved Vogue writer Christian Allaire enough to reach out to her for an article.

“What I’m working towards is making meaningful work that gives a voice to those who need the platform,” Zamarron said. “If an editor reaches out with interest, that’s great, but it doesn’t stop me from creating the work that’s important.”

While she sees having work featured in a prominent publication as an accomplishment, she primarily values her work as an outlet for underrepresented people to share their voice.

Before the colonization of the area that is now known as Detroit, the land was named Waawiiyaatanong. The women in Zamarron’s photo are part of the Waawiiyaatanong Resurgence and one of the goals of the movement is to decolonize spaces. By being published in Vogue, the movement has been given a broader platform to be heard.

The photo featured in Vogue is part of an ongoing project that focuses on decolonization. More of her work related to the lives and advocacy of Native Americans can be found at her website rosamariazamarron.com.

In addition to her documentary photography, Zamarron works with local nonprofits in Southwest Detroit to teach photography to the youth.

“I want to be a resource for young photographers,” Zamarron said. “It’s important to give back to the community that raised you and has supported you. I also love seeing what the youth can create, And I learn a lot from them. We need to provide our youth with the tools to be able to take control of their own narrative and expression especially in these historical times. I believe photography is a great medium for that.”

As a woman of color, Zamarron said it has not been an easy road, but she valued her time at GVSU because of the friends she met and the professors she was given the opportunity to work with. One of her favorite classes was Social Eye with professor Anthony Thompson because she learned how to create a complete visual narrative. Zamarron said Thompson was a major influence at GVSU as well as her thesis advisor.

“What I remember most about Rosa Maria as a student was that she would challenge herself to overcome her fears and situations where she was uncomfortable — she didn’t take an easy path if the challenging one would make better work,” Thompson said.

Zamarron turned in environmental portraits of people in a neighborhood of Detroit for an assignment in Thompson’s class. He still shows his students this work because he said it shows her ability to establish a rapport with her subjects.

Other than the photography courses she took at GVSU, Zamarron said there were many communication and other general electives that set the program apart.

“I think being able to take all of these classes and learning as much as I can really has helped shape my career in terms of my documentary and photojournalism work,” Zamarron said.

As someone who has overcome many obstacles to succeed in her field, Zamarron advises current students in the GVSU photography program to network and take workshops from a range of different photographers.

“It’s not an easy field and there’s a lot of ups and downs but if you keep steady, keep pushing yourself and don’t give up then you can make some beautiful work happen,” Zamarron said. “You might not make photography your full-time job and that’s ok. The important thing is to stay focused on the importance of the work you’re creating and to really love what you’re doing. If you’re not passionate about the projects you’re working on then no one else will care about what you’re trying to say.”