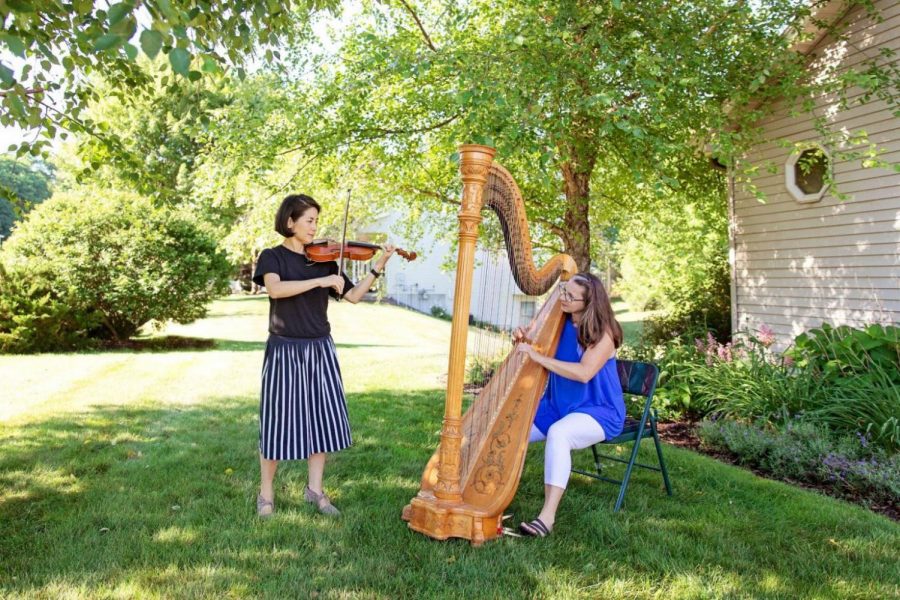 Despite not being able to perform altogether since March 13, the Grand Rapids Symphony still brought live music to its audience members with a series of “Sidewalk Serenades” and “Porch Concerts” throughout August.

August 2-29, members of the GR Symphony performed on audience members’ porches and driveways, bringing them the joy of live music during these difficult times. The classical music series “Porch Concerts” typically lasted around 30 minutes, but with no set time limit, musicians were able to select their own program.

Violist and Symphony member Kristen Shoup Lausman is starting her 27th season with the GR Symphony and participated in the “Porch Concerts” series throughout the month. Lausman wanted to perform a concert in her neighborhood, but with her own home having too small of a porch, she decided to have the performance in her neighbor’s spacious driveway.

“We borrowed a tent from another neighbor and my string trio played a short concert there on Monday, Aug. 3,” Lausman said. “It was a resounding success. It was wonderful to actually bring music to the people.”

GR Symphony members who opted not to participate in the “Porch Concerts” series chose to perform in a different summer concert series. One of these series was the “Sidewalk Serenades.”

“Sidewalk Serenades” began Aug. 20 and concluded on Aug. 29. The series allowed Grand Rapids residents to have their own personal concerts in their driveway for $300. Each concert allowed up to 10 audience members who were all required to wear masks.

Similar to the “Porch Concerts” series, “Sidewalk Serenades” involved a small ensemble or soloist selecting their own repertoire and performing a roughly 30-minute concert.

Vice President and General Manager of the GR Symphony, Aaron Doty, said that the idea for these smaller venue summer performances, “was a response to our community’s need to have live music continue.”

Patrons were able to sign up for a performance on the Symphony’s website. The desire for live music was so overwhelming within the Grand Rapids community that the Symphony was fully booked. Doty said that over the course of the nine days the “Sidewalk Serenades” took place, residents had requested over 60 performances.

Symphony members were able to perform in a manner that complied with mandated social restriction guidelines. Limiting the number of audience members was another key factor in keeping both of the concert series safe. Lausman said organizers didn’t advertise any outdoor performances to keep audiences small.

“Even though the pandemic has brought all sorts of challenges, playing these small concerts on porches and in driveways and parks has been an amazing experience,” said Lausman.

“We are bringing the music to the people and they’re thrilled,” she continued. “I have had so many people come up to me after a performance to thank me and let me know how our music fed their souls. People are so hungry for live music. Music is very important in all of our lives even though a lot of people don’t realize it. This might be one of the few positives to come out of this very challenging time.”

Doty said that the Symphony is looking forward to their fall season where they will continue bringing music to the community with their Pathwaves series.