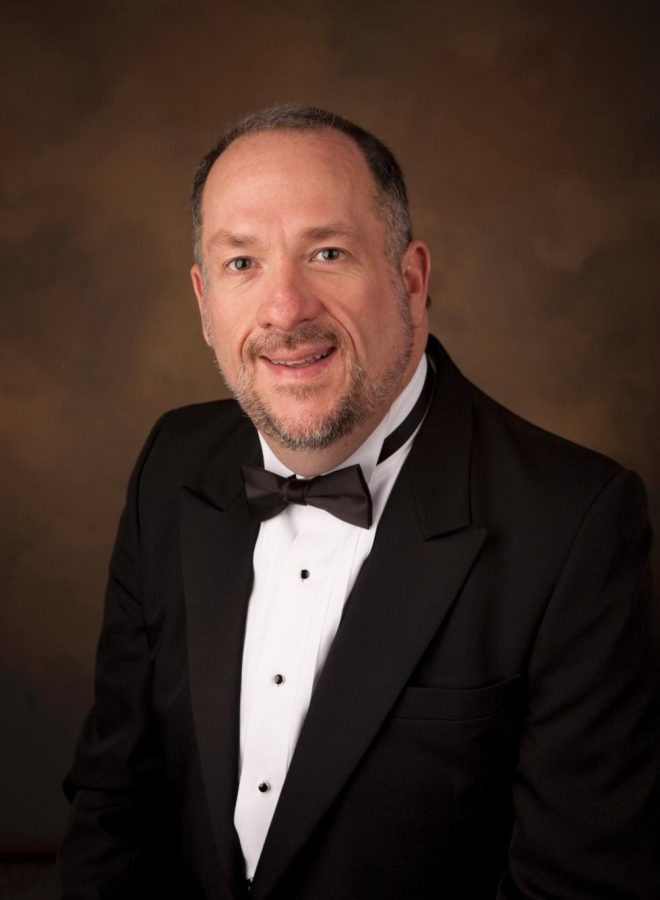 The Laker Marching Band (LMB) spreads across their practice field, always four steps apart, or about seven and a half feet. Each wind and brass instruments’ bell is covered in a piece of Grand Valley State University branded felt to limit the spread of aerosols that might carry dangerous viruses.

“Alright, let’s take a five-minute break,” said John Martin, director of the Laker Marching Band. “Face coverings up as we leave the field.”

They take these breaks every 30 minutes, and every 20 when it’s hot, in order to let the aerosols disperse.

After a summer of online auditions, the LMB staff held three virtual town hall meetings, not only to provide a sense of purpose for the students, but also to determine how many wanted to participate in person. In the end, 180 chose to attend band camp in person, 16 decided to engage online, and six or seven are waiting for next year. Martin said he was “taken aback by how many wanted to be in person,” and felt that it showed the students “really want to be a part of something and to regain a sense of normalcy.”

Since March, the LMB team has been collecting information from the updated guidelines created by the College Band Directors National Association and the National Federation of State Highschool Associations, along with the wind aerosol studies begun by several universities. These guidelines and research informed every decision made for the LMB.

A GVSU mask and a refillable bottle of hand sanitizer are provided to every musician. If it’s raining on a practice night, band is canceled. At the end of the night, each instrument is disinfected in preparation for the next day. There are no exceptions.

The LMB faced many challenges, such as rewriting the pregame show to allow for social distancing. Every limitation is addressed with positivity. Ryan Servis, a drum major and third-year member, praised the way the LMB leadership team has kept up morale. First-year clarinetist, Nick Sparks, also does his part by encouraging his fellow musicians and always being available to help.

Servis said, “The members as a whole have been receptive to our positivity.”

Those band members engaging online will still be required to memorize the pre-game music, and every week or two, the students will focus on different topics ranging from how to build a show setlist to diversity, equity and inclusion. Martin plans to bring in guest speakers, including alumni who are eager to give back to the community. If LMB has to move completely online, this same model will be used for the entire band.

Four shows are still planned for the fall semester, and even without an audience, the musicians are eager to perform together as a band. Servis explained that instead of supporting the football team, this year the band’s focus is on encouraging the entire university.

“This renewed purpose has resulted in enormous excitement within the band which grows every day that we hear a news story from Dr. Martin about someone whose life we brightened up just by doing our thing,” Servis said.

He looks forward to continuing to meet in person for as long as possible “to make sounds and memories and hopefully be a model for other bands who are lucky enough to still be marching this year.”

After practicing alone all summer, Sparks echoed Servis’ excitement to perform with other musicians and shared how “playing with more than one person opens more doors.”

“I’m glad they want to be a part of this,” Martin said.

No matter what decision the members of LMB made, Martin makes sure each one knows that “they are vital and always a part of the family.” He acknowledges that it’s been a hard year and that it will look different, but his mantra is, “No negativity. You have to be realistic, but keep the passion.”