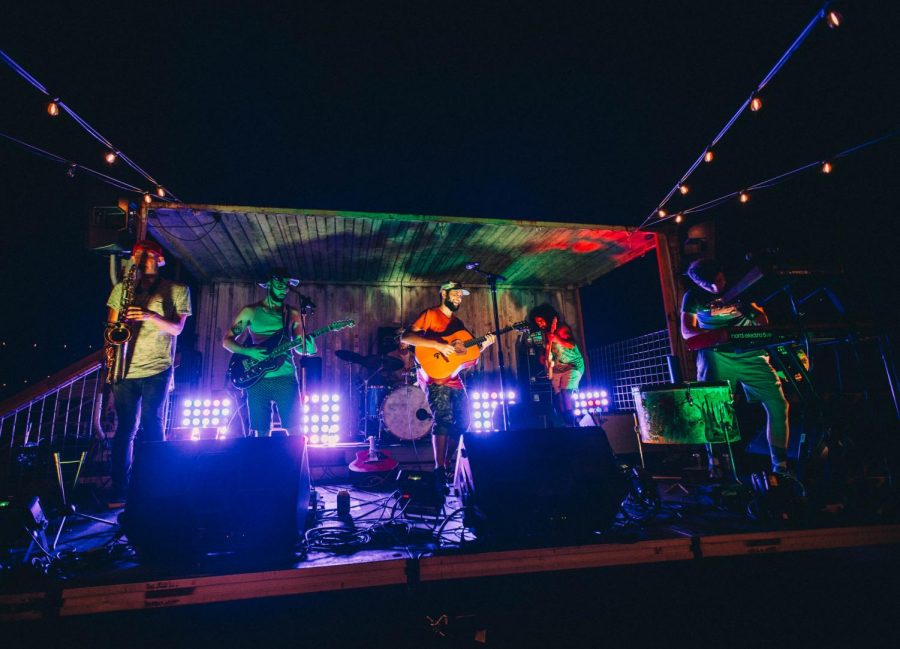 It is unclear how long musicians and audiences will have to wait before concerts are able to go back to normal. Until then, artists are finding ways to provide a live music experience for fans, even if it means things will be a little different. Michigan-based band Joe Hertler and the Rainbow Seekers emerged from their three-month hiatus off of live shows to perform on the beach for a socially distanced concert at The Deck in Muskegon.

The lake breeze and sandy surroundings were the cherry on top of the perfect venue for a socially distanced event. The Deck is located on Lake Michigan’s beach in Muskegon. In addition to the table service restaurant, The Deck has a bar and snack bar to fill up the venue’s audience with a wide range of drinks, entrees and appetizers.

While the performers maintained the same energy as they would any show, this concert was a little different than most shows prior to COVID-19. It was a seated concert and audience members were required to wear a mask anytime they were not in their purchased seat. Tickets were sold by the table, each seating up to six people. The first show was Wednesday, Aug. 26 and the remaining three shows in this Beach Masquerade series will take place Sept. 11, 12 and 13.

Band frontman Joe Hertler said he takes the pandemic very seriously, and he trusted The Deck’s proposed plan to uphold a safe environment for fans to enjoy the show.

“Things are ultimately out of our control, but what we can control in this situation is trying to be safe with it and taking every possible precaution as we can to make sure that it works out alright and no one gets sick,” Hertler said.

Attending live shows plays a role in one’s connection to their community, making it important for venues and artists to work together on planning safe shows.

Not only is a concert a fun night out with friends, but it provides a community with a valuable shared experience that can bring people together.

While it seems as if some key parts of being a musician have been temporarily taken away, Hertler has managed to find some silver linings. After many long years of touring, Hertler said he embraced the quarantine as a nice break to stay home and focus on his music.

He said he hopes that people begin to understand how fragile life is and learn to adapt to the unexpected events and obstacles that are presented.

Hertler’s idea of life’s fragility and the false sense of security displayed throughout American society is included in Joe Hertler and the Rainbow Seekers’ latest album, “Paper Castle.” Along with songs from previous albums, the band played multiple songs from “Paper Castle,” including the encore song, “Death Don’t Worry About Me.”

As time progresses, more venues and bands are starting to hold performances in the safest way possible. The Deck is holding live shows every weekend. Plain Jane Glory, Lazo, Cruizin Jupiter and The Carl Webb band are their other September acts. In addition to their shows at The Deck, tickets are on sale now for a Joe Hertler and the Rainbow Seekers’ drive-in concert at the Belknap Drive-In in Grand Rapids, Michigan.