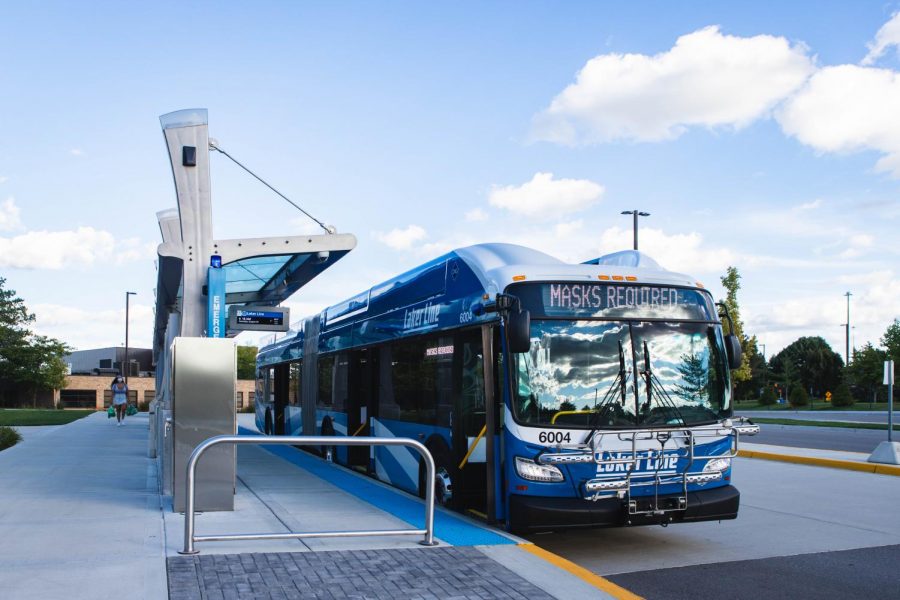 On Aug. 24, the ceremony was held to mark the official launch of the Laker Line at the Pew Station on Fulton Street. The event also celebrated the 20th anniversary of the formalized partnership between Grand Valley and The Rapid.

“We appreciate the efforts and cooperation of all those who helped make this possible,” said Sanial. “With more than 2 million rides per year, the Laker Line is essential to the Grand Valley community and will improve the quality of life for our students.”

The $71 million Laker Line includes 20 stops along the way including the Pew Grand Rapids Campus and the Health Campus on the Medical Mile, and is seven years in the making.

The new busses are 60-foot-long, with dual boarding and wider doors for quicker boarding and will hold 50 percent more riders. Bus stations include seats, shelters snowmelt and raised platforms so riders don’t have to step up to get on the bus. Enhancements also include traffic signal priority technology that will allow buses to flow through traffic more efficiently.

More than 5,000 new and returning Grand Valley students moved to campus August 23-27, with students and their supporters assisting with move-in required to complete the Lakers Together Daily Self-Assessment before arriving on campus.

The pre-move in list provided by the Housing department included check-in, room condition reports, testing dining cards, planning your class routes, obtaining a parking pass, and attending the floor meetings, among others. All campus vistors and residents were required to wear masks indoors and around others.

On campus, there are 5 different living center styles to choose from, and 87% of first-year students normally opt to live on campus.

Overall, even despite COVID-19 many students were eager to get into their dorms. One freshman student said she had been looking forward to move-in all summer.

“I definitely feel a little nervous, but I think this year will be a good one even with everything going on,” she said. “I’m looking forward to starting college, even if it is a lot more different than I thought it was going to be.”

Daniel Chappelle, a GV graduate class of ’89 and a longtime athletic training program director at the university and at a local high school. Following his passing, the Dan Chappelle Athletic Training Scholarship was created in his memory to help students looking to pursue a career in athletic training.

Chappelle spent 35 years at East Kentwood High School and was a crucial part of the athletic training program at GV, working with students to mentor and supervise them as they learned about the profession in the field.

Chappell was greatly influenced during his time at Grand Valley by Doug Woods, the former softball coach who was the head athletic trainer for many years.

Shari Bartz-Smith, associate professor and athletic training program director at GV, said Chappell was passionate about instilling in young aspiring athletic trainers the important values of the profession, and the pride of getting to work early and staying until the job was done well.

“He was so invested in seeing the students become successful,” Bartz-Smith said. “He wanted students to understand what it took to be successful in the field and that you have to love what you do, and Dan loved what he did.”

On Thursday Aug. 27, GVSU began random testing on campus as well as continuing to collect data from self-assessment reports that have been available for students and staff for the last two weeks and will continue throughout the semester.

Through the self-assessment reports, testing results and other information, GV’s Virus Action team have reported 31 students with positive cases and are in isolation. All live off-campus.

Testing and Incidence: For the on-campus testing program this week, of the 618 complete results, 609 were negative, 7 were positive, and 2 were inconclusive (and need a retest). Positivity based on this data is 1.1%. More test results are pending.

GV’s Virus Action Team is conducted over 1300 more tests on August 28 and August 29.