Laker Marching Band steps into a season of their own 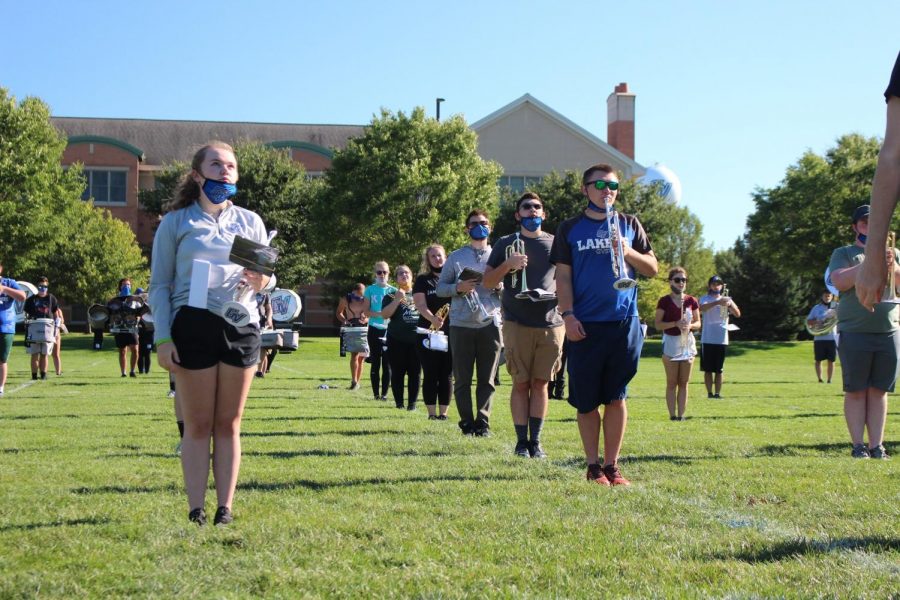 As Grand Valley State University students head to class this semester, it may feel like a new campus. One thing, however, will be familiar. The Laker Marching Band (LMB) is on the practice field, and their season is in full swing.

It may surprise many GVSU students to see the 180+ member band on the field four nights a week, but LMB director, Dr. John Martin, said that preparations for a safe 2020 season began in the spring.

Martin said that the College Band Directors National Association (CBDNA) and the National Federation of High School Associations (NFHSA) commissioned a study on aerosols produced by wind instruments. Martin used the recommendations given in the study to guide the LMB practice model for the year.

“When everything shut down the first time and we moved online, the CBDNA and the NFHSA immediately went into action because they knew this [COVID-19] was going to be an issue in the fall,” Martin said.

Brooklyn Chaffee, trombone section leader and third-year LMB member, said that safety was a major concern for many members.

“We were waiting on some big studies to come out and see if there was a way we could work around it, and we found a way that’s worked for us,” Chaffee said. “Anytime we’re not playing we wear masks, and we were able to buy horn covers, so there’s a little thick material like a mask for your instrument.”

Levi Barry, mellophone section leader and fourth-year LMB member, said that seeing the precautions taken by the LMB and GVSU has reduced his concerns about safety.

“I was skeptical, to be honest, just because of news from other universities. But from my class experience, especially with the marching band, a lot of people have taken this very very seriously,” Barry said. “I feel better about it now.”

Although the GVSU football team will not be playing this semester, over 180 LMB members opted to participate in the LMB this fall regardless, Martin said. Soren Wright, a sousaphone section leader and four-year member of the LMB, said he believes there is a strong sense of community that brought many members back.

“Band, for me, has always been about football games,” Wright said. “But more often than not when I speak to a lot of people in the band, it’s less about that and more about the fact that all of us have cultivated these friendships through music, as well as through the group itself.”

Martin said that the LMB is planning to Livestream four events this semester, and it was of the utmost importance to him that students felt safe and supported in their decision to participate in the LMB this fall. Students had the option to participate in person, online or to take a year away from the group, Martin said.

“We did a form online, asking them to reevaluate, and to choose if they want to go in person or virtual, or if they decided they’re going to wait and come back next year, and we told them to make sure they understood, whatever they choose they are 100% supported,” Martin said. “Making sure that the individual feels comfortable in whatever environment they choose to learn it, that’s the primary thing.”

“We have four Friday’s that we’re hopefully going to do a show at the stadium by ourselves,” Martin said. “We’ll live stream our performance and try to make it as much of a game atmosphere as we can.”

Martin said that although the pandemic has brought on many changes, he is glad to see the LMB bring a sense of normalcy to campus this fall.

“People can hear us during practice across campus and think ‘oh, there’s the marching band,’ you know,” Martin said. “Yeah, we’re in this pandemic, but still some things can happen as we cautiously move forward.”

Chaffee said that regardless of what happens next, she is grateful for every day the LMB is out on the practice field.

“Honestly, I’m just happy for every day that we get,” Chaffee said. “I just it one day at a time. I’m happy to be able to see everyone every Monday, Wednesday, Friday. I’m happy that we get to spend time together and play our instruments.”