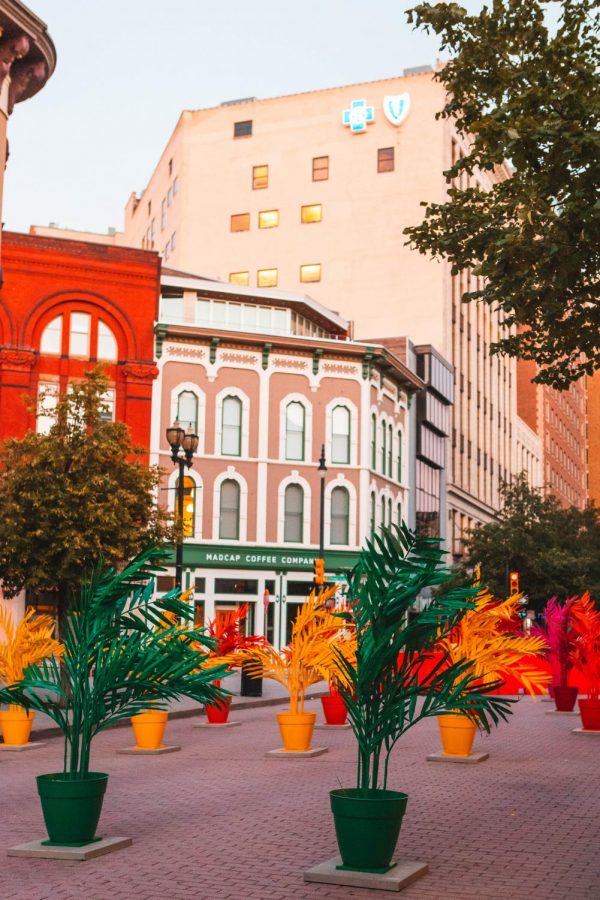 Patrons smile as they walk through the collection of pride-flag-colored palm trees called “Tropical Realness” that stands on the corner of Monroe Center and Ottawa Avenue in downtown Grand Rapids. It somehow captures everything visitors feel at this moment: the distance and community, the hope and illusion.

Jeffrey Augustine Songco’s works always capture an element of himself through self-portraiture.

“Many think one’s face is needed for art to be a self-portrait, but it doesn’t need a face to identify someone,” Songco said.

In this installation, Songco used palm trees to depict his Filipino heritage, “Americans and the West equate palm trees with the exotic.” Those palm trees were then painted in the colors of a pride flag, representing his identity as a gay man.

As the project took shape, a third element became apparent. The palm trees stand six feet apart, distanced and differently colored, and yet united into a single artwork. Songco sees this as an important part of the project in this time of isolation and the fight for racial equity.

Earlier in the year while developing the proposal for “Tropical Realness,” Songco opened his first solo gallery show, which played with self-portrait and art commodification by printing self-portraits on cloth in psychedelic patterns and cutting them into the shapes of flowers and plants. To Songco, “Tropical Realness” was a natural extension of his gallery piece by scaling up the plant motif and continuing the exploration of symbols.

Originally part of an ArtPrize grant competition at SXSW, Songco’s piece did not win, but when ArtPrize was canceled, Bridge GR reached out to the artist and invited him to be a part of the event.

Instead of the six months of preparation time Songco had planned on, he had only one month to get the piece up by the beginning of September. Although there were concerns about delays because of the pandemic, the palm trees arrived on time. After spray painting the trees on his partner’s family farm, “Tropical Realness” was installed Aug. 29.

However, the next day, all the trees blew over, so once again, they were loaded onto a truck and brought to Songco’s apartment where they reengineered the plant bases with concrete slabs. At the last minute, the trees were reinstalled in time for the Sept. 1 opening.

Songco is excited to provide a distraction from the anxiety of isolation by confronting visitors with something that looks real but is painted in unnatural colors. He wanted to play on illusion and reality.

“(I) want to make art more approachable and (encourage visitors to) think of new ideas and ways to approach the familiar,” Songco said.

While “Tropical Realness” might be a self-portrait, Songco hopes visitors walk through the installation and consider how they fit into it.

“Maybe they’ll connect with a certain color and relate to it in their own way,” Songco said.

Having moved to Grand Rapids because of his participation in ArtPrize, Songco is excited to once again be able to participate in the city’s artistic expression. Thanks to the help of his partner, friends, neighbors and helpful team at Downtown Grand Rapids Inc, he is “(excited to have) art outside in a public space again and bring something cool to social spaces that are being activated.”

“Tropical Realness” will join the Monroe North Lot art at the end of the month.