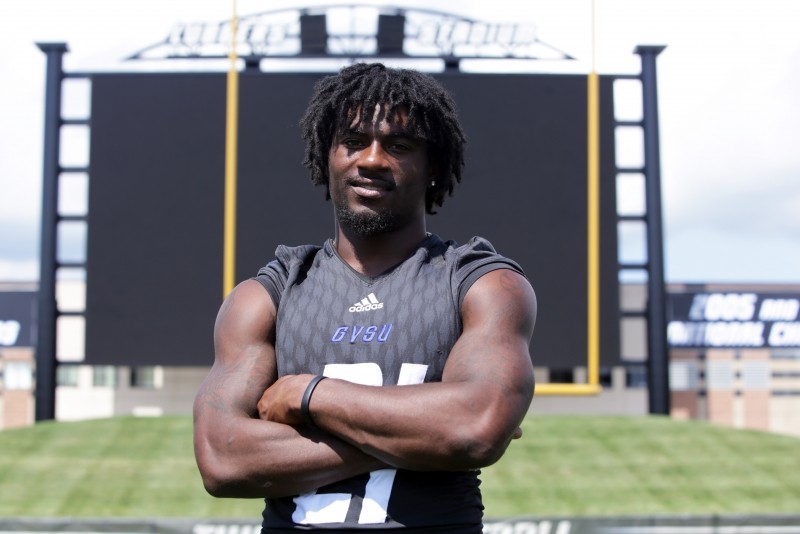 Martayveus “Marty” Carter, a Grand Valley State University football alum, is still the all-time rusher in GVSU football history three years later. The summer before his senior year in 2018, Carter was involved in a shooting in East Chicago that paralyzed him. Carter’s legacy at GVSU is still held by his record of 1,908 rushing yards in 2016 and 298 yards in a single game on 20 carries.

Alongside these unbelievable stats, Carter received numerous awards including, D2Football.com National Offensive Player of the Year and First-Team All-American. Apart from the impressive records Carter racked up his sophomore year, GVSU head coach Matt Mitchell and Carter’s former teammates remember him for much more than an all-star player.

The shocking news that Carter had been admitted to the hospital and was in critical condition, devastated the team as well as the GVSU football community. Mitchell reflected on the feeling, that kind of shock created for him and the rest of the team, and how he remembers Carter’s impact on GVSU history.

There is no doubt that that statement alone is enough to remember someone by, and Carter’s teammates and friends were always with him and supportive of his role on the team.

His academic career took a hit after an injury that kept him off the field for a chunk of his junior year. His inability to play was hard on both Marty and Mitchell, causing some stress on their player-to-coach relationship. After Carter’s junior year, he was ruled ineligible for the 2018 season.

“The biggest regret was after that junior season, we all failed Marty,” Mitchell said. “We weren’t there for him when we needed to be there, and that resulted in him not being academically eligible.”

Carter declared for the NFL Supplemental Draft and scheduled a workout with the Kansas City Chiefs despite his struggles in junior year. Not long after, Carter’s life was altered in the blink of an eye and the news brought upon a real sense of reflection on his impact at GVSU.

“It’s very difficult when you get the phone call that there’s been a shooting and he’s been involved,” Mitchell said. “Then you start to get the details about that and the long-term health effects that’s going to have on him and how that robbed him of the chance to play football ever again. That’s very difficult and that’s obviously some of where the remorse or regret comes from my standpoint of the things that we could’ve done better.”

Marty’s legacy at GVSU is not defined by his statistics and undeniable devotion to the sport. In Mitchell’s eyes, it is defined by the lasting impact his time on the team has brought Mitchell as a coach and a friend.

“He was full of energy, always had a smile on his face, always had a bounce in his step,” Mitchell said. “Very dynamic and engaging personality when you’re around him. A very fun-loving person and he cared a lot about his teammates. He was not a dull person.”

Coach Mitchell refrained from talking about his current whereabouts and what he is up to today, but he does still keep in contact with Carter.