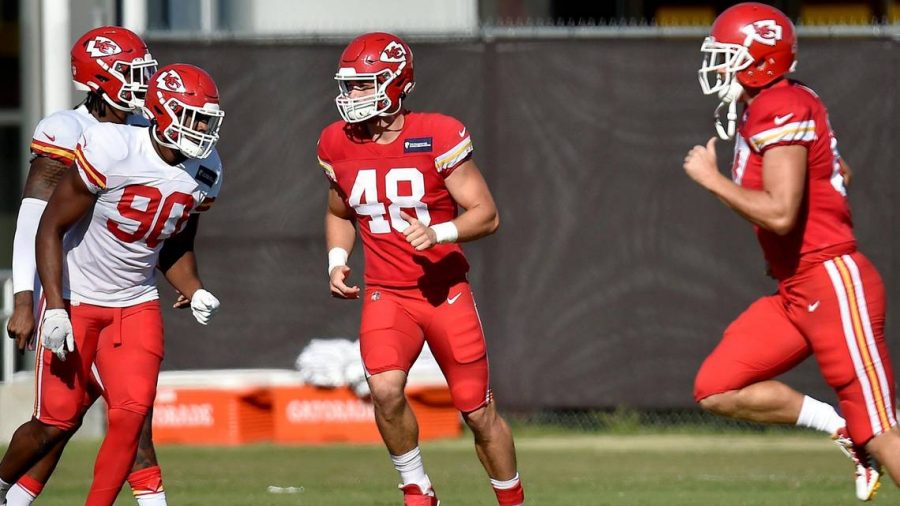 Courtesy of The Kansas City Star

Grand Valley State University is scarcely represented in the National Football League. There are a couple of players — linebacker Matthew Judon with the Baltimore Ravens and cornerback Brandon Carr with the Dallas Cowboys — who played football in college as a Laker. This year, there is a new name in the NFL who used to don the GVSU blue and white.

Tight end Nick Keizer made his NFL debut last Thursday, Sept. 10, as a member of the Kansas City Chiefs. It’s a dream for many young men to play in the NFL and Keizer has now seen his dream come into fruition.

Keizer’s debut game was unlike many other NFL players’ introductions into the league, with limited fans in the stadium because of the COVID-19 pandemic. The moment wasn’t lost on Keizer without a big crowd — it was almost perfect for him. Arrowhead Stadium had about 17,000 fans at the game, much like a GVSU contest.

“My first game was exciting,” Keizer said. “My whole life I looked forward to and worked hard to play in an NFL game. To get the chance to do that was a dream come true. It was a nice intro into playing at that stage rather than playing in front of 70,000 people in my first game. With how big that moment is, it felt better doing it in front of less people in the stands. It was almost like a GVSU game.”

Keizer played well in his first game. He was excellent in run blocking. He saw the field frequently in two or three tight end set formations. Keizer also had a key block on a touchdown screen play to wide receiver Sammy Watkins. While Keizer was impressive in the inaugural game of the 2020 NFL season, no one expected him to make it this far — not even himself.

When Keizer’s career ended at GVSU in 2017, he left the field with 45 catches, 734 yards and 11 touchdowns to his name. Heading into the NFL draft, Keizer believed some teams were interested in his services. He didn’t expect to get drafted out of a DII school, but there was a possibility of being signed after the draft. That’s exactly what happened when the Baltimore Ravens offered him a chance to compete in their training camp.

“My first training camp was filled with a lot of emotions,” Keizer said. “I was excited, but it was highly stressful being a rookie learning an entirely new offense. The last time I had to do that was at GVSU. The speed of the game was also next level. It was difficult going from DII to that level of football. There was also a lot of pressure on me to perform. All and all, even with all the stress, it was an exciting and good experience.”

Keizer competed hard, but like many NFL training camp walk-ons, he was cut. For the next two months, Keizer was without an NFL home and was not playing football for the first time in his life. Luck came back Keizer’s way when an injury in the tight end room left a spot for him on the Ravens practice squad in week ten of the 2018 season.

He stayed with Baltimore for the remainder of the year, but he was waived before the first game of the 2019 season. That’s when he was signed by the Kansas City Chiefs. For 2019, he remained in the league, albeit on the practice squad, but he still felt fortunate and blessed to be playing football.

It wouldn’t be until this year that he finally proved to himself, his teammates and head coach Andy Reid, that he belonged on the team.

“This year in training camp, I took a lot from my previous two years and I built upon it,” Keizer said. “This season, I worked on a lot of things I needed to improve on. I made some adjustments to blocking, worked on route running, and tried to become more versatile and consistent in my game. Honestly, I was lucky that the depth at the tight end position was thin, which led to me getting a lot of reps.”

All of those factors led into Keizer making his first NFL roster. He took not only what he’s learned from the past couple seasons on NFL practice squads, but everything he learned from his entire football career to improve on.

If not for his time as a Laker, it’s doubtful that Keizer would be in the NFL right now. Even though GVSU is a DII school, Keizer learned many valuable lessons about competing and football. He not only grew as a teammate and player, but as a person.

“At Grand Valley State, I learned to stay persistent with my work ethic and my goals,” Keizer said. “I didn’t necessarily have an easy path at GVSU. I first got there and I didn’t play for two years. I was always working my way up to the top tight end spot and to be the guy. I had to stay true to myself and my goals. I knew that if I ever got the opportunity at GVSU I’d have to stay persistent to stay on the field. That’s helped me in the NFL process, being the underdog and undrafted guy. I had to stay true to my goals and to keep pushing.”

Although Keizer now plays over 650 miles away from his alma mater, he still thinks about his time as a Laker and what he misses.

“I liked the school, I loved being at GVSU,” Keizer said. “I made some of my best friends at GV. I went to school with them and played football with them. I miss the camaraderie and the locker room. I miss living in dorms with them and I’ll always cherish it. I’m still in touch with them, and it’s nice to see them and hear from them once and awhile.

On Keizer’s middle finger sits a Super Bowl ring. It has 255 diamonds and his signature engraved on the inside of the ring. It is something that NFL players fantasize about. While Keizer may not have been active on the 53-man roster that won the Super Bowl last season, he still had an integral role in practice and competing with teammates to improve their skills and his own.

Even with a roughly $33,000 ring on his finger, Keizer is still humble and has been in the same situation as every member of the Lakers football team right now. He knows what it means to struggle and to do everything to make dreams come true.

“Obviously anyone’s goals are possible with me doing it and playing in the NFL,” Keizer said. “There are guys before me that have done it and other guys who went to GVSU that are doing it right now. The DII label doesn’t necessarily mean you can’t do it, but being a DII guy does mean you’ll have to overcome a lot of obstacles. It takes a lot of work and extra hours. You need to put in extra hours and sacrifices. It is worth it.”