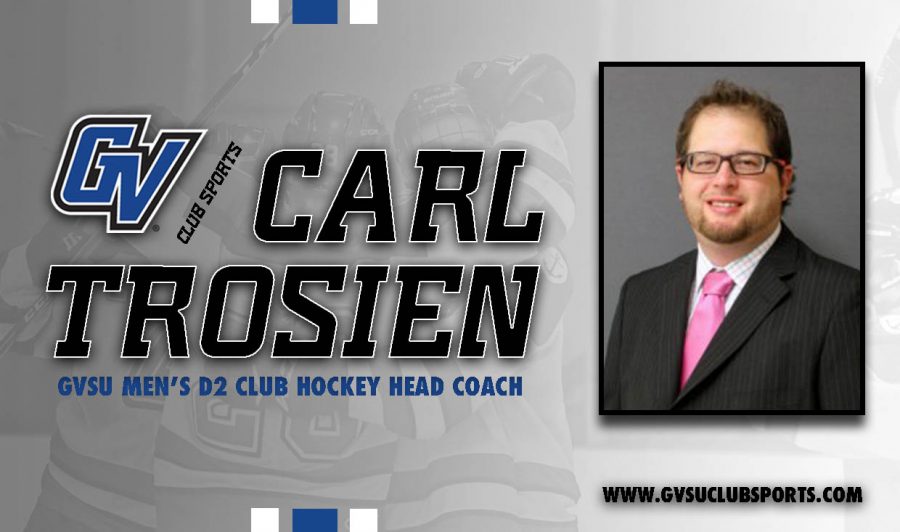 Head coach Carl Trosien of the Grand Valley DI Club Hockey team is going on his third year coaching for the Lakers, but his admiration for the sport began way before his career as a coach started.

Just as every great athlete’s story begins, Trosien was the kid that they couldn’t get off the pond every winter, whether it was lit up with streetlights or car headlights; day and night he was on the ice. Growing up in Michigan, Trosien had lots of exposure to the culture of the northern sport, and his family made it a constant in his life.

“There’s never not been a point in my life where I haven’t had hockey,” Trosien said. “I was the kid that would go hours outside playing hockey on the pond.”

Trosien’s beginning in the hockey world lead him to play from 3 years old on the pond, to indoor rinks competitively at 6, and on to high school, which eventually transitioned into coaching camps and hockey retail. After returning to hockey every time he would try something new, Trosien decided he had to stick with his gut and become a coach, and he has never faltered in this choice since.

“I just stumbled on it at 24-25 – I got my first gig in the ACHA just kind of by chance, and it was right time, right place,” Trosien said.  “It’s the longest job I’ve had; I was struggling in life to find anything I wanted to do, and like I said, I kept coming back to hockey. I think it’s just being in the trenches with the guys and being in that atmosphere, and I think that’s probably one of the reasons it’s filled that void of not playing anymore.”

After having both experiences as a goalie throughout his playing career and as a coach, Trosien commented on some of the differences between being on the ice and behind the glass. Aside from making the calls and taking responsibility for game outcomes, Trosien appreciates the smaller things, like his relationships with the players and the feeling of being a part of something he has known so well his whole life. What makes a great coach is more than just the player to coach relationship though, it is constantly evolving with the culture of the sport and improving after every game.

“I enjoy those downtimes where you’re able to laugh and be a human being, and not have to be Coach all the time,” Trosien said. “But I have no issues owning the decisions I’ve made, and sometimes you win, sometimes you lose, and sometimes you think maybe I could’ve done more or maybe I did all I could do, but at the end of the day I like that that’s on me. Maybe that’s why I’ve had some success, because I’m okay with that.”

Trosien’s coaching style has obviously worked for him greatly over his career because he understands both sides of that relationship and genuinely wants his players and teams to find that success. No player is alike, and each of them deserves a coach that cares about what they get out of playing sports.

“Everyone says they want to find the perfect job,” Trosien said. “Well, I feel like if you’re still having fun 14 years in and you’re going to the rink every day and you’re having a blast, you must be doing something you enjoy. I still love the grind.”

Having found his calling in life, Trosien shows no signs of slowing down anytime soon with hope that this season gets back on track. With the impressive records Trosien has racked up since his coaching years began, it is no surprise that he has made it to the DI league with the Lakers on his third season as head coach. Despite the ongoing delays and uncertainty surrounding the climate we are enduring, Trosien remains optimistic about his players ability to play this season.

As for Trosien, his playing days are over for the most part; however, given the opportunity to play against any NHL player, past or present, his choice is in like with what any great hockey fan would say: “It’s got to be Wayne Gretsky, right?”