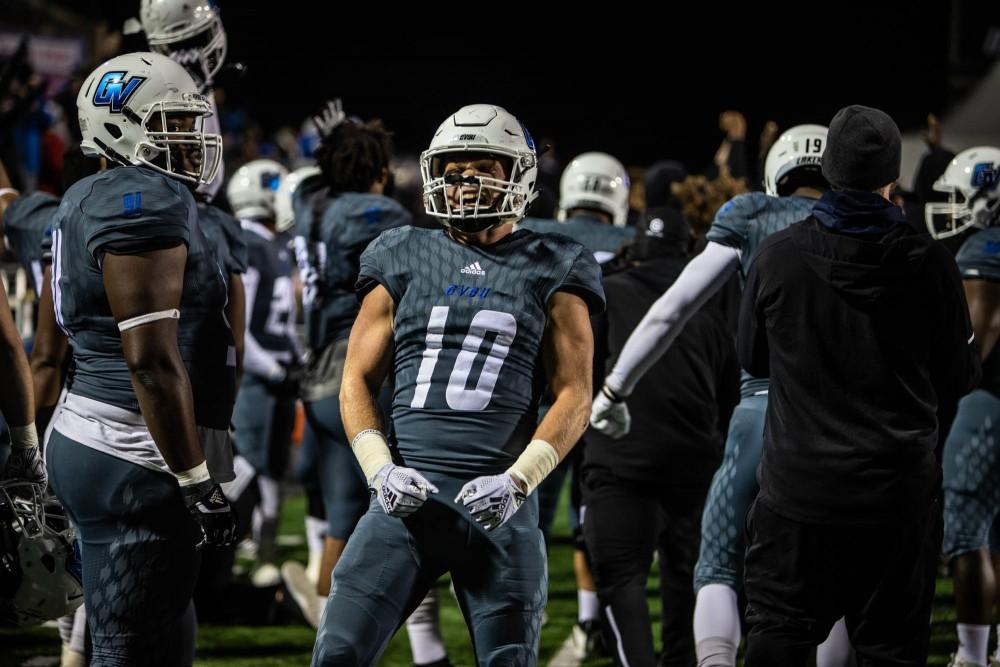 Tyler Bradfield flexes on Ashland in a 20-17 win at Lubbers Stadium on Nov. 3. GVL / Sheila Babbitt

For his exemplary performance on the field, work ethic in the classroom and donation of time to community service, Grand Valley State senior linebacker Tyler Bradfield has been named by Allstate and the American Football Coaches Association (AFCA) to the 2020 Allstate AFCA Good Works Team.

“I’m really excited and really thankful,” Bradfield said on the honor. “I take a lot of pride in all facets of being a student-athlete and helping others, (and) I also want to thank Allstate and the AFCA for recognizing the 2020 team.”

Bradfield is no stranger to winning awards both on and off the field, as he is a two-time reigning CoSIDA Academic All-American, earning first-team honors in 2019 and second-team plaudits in 2018. He is the first Laker football player to earn back-to-back Academic All-America honors.

Double-majoring in accounting and finance, Bradfield is a two-time All-GLIAC honoree and a three-time GLIAC All-Excellence performer.

Bradfield had a career year last season, as he was named 2019 GVSU Skill Defensive Player of the Year, Bradfield ranked second on the team and eighth in the GLIAC in total tackles with 81 stops, while recording 10.0 tackles for loss, 4.0 sacks, three pass breakups, three QB hurries and two forced fumbles.

Over his career with GVSU, Bradfield not only has some impressive defensive statistics (214 career tackles, 21.5 tackles for loss and 7.0 sacks) but has also earned a good reputation as one of the hardest working student-athletes at GVSU.

“This is an awesome honor for Tyler and he is so deserving,” said GVSU head coach Matt Mitchell. “Tyler is the consummate student-athlete who is one of the most respected student-athletes at GVSU. He cares about his fellow teammates more than he cares about himself and is a mentor to those younger players in our locker room. In addition, Tyler is so giving of his time to help others and is involved in every community service project that our football team participates in, while also helping with other projects outside of football.”

Just like many college football players across the country, Bradfield’s fall semester feels a lot different, as he misses spending weekends with his teammates playing the game he loves.

“It’s definitely a weird feeling sitting on the couch on Saturday,” Bradfield said. “You’ll see a Snapchat memory from a year ago today, and it’s a Saturday and you’re on the bus going on a road trip. It’s definitely a different feeling, but there’s not much we can do about it right now.”

Bradfield will earn his undergraduate degree in December and will look to enroll in a master’s program at GVSU to retain his final year of eligibility with GVSU football.