Ruth Bader Ginsburg makes history even after death, will live on as a civil rights icon 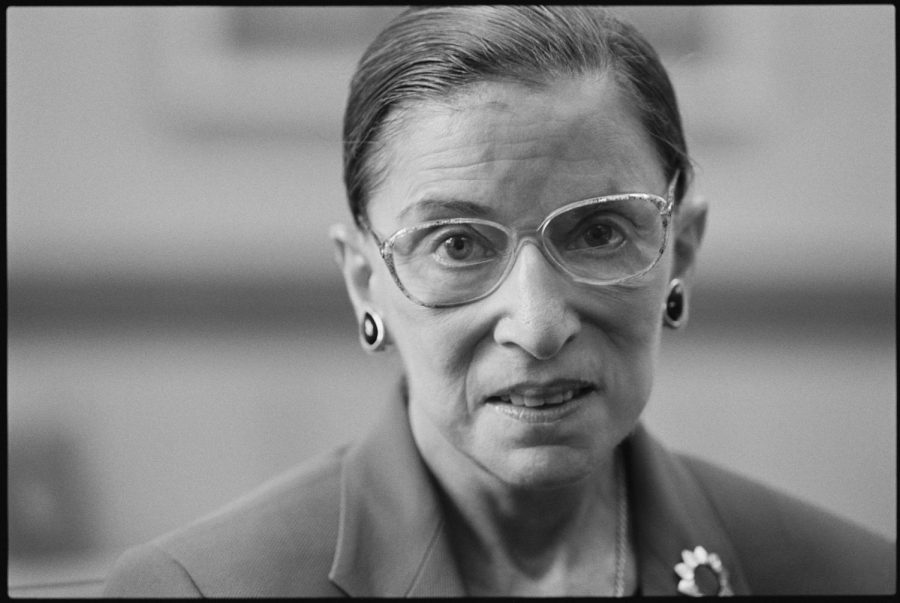 How does one celebrate the life of another human being who made such a profound impact on millions of lives, and whose work will continue to inspire change for generations? How do you celebrate the life of a woman who stood only five-foot-one, but who’s heart, passions and drive stood larger than life? Even after her passing on Sept. 18, the late Supreme Court Justice Ruth Bader Ginsburg’s impact continues to be seen in both the streets around the nation and the Supreme Court steps.

The iconic judge, known by many fans and the media as ‘Notorious R.B.G.’ (a reference to late rapper Biggie Smalls, or the Notorious B.I.G.), is remembered as a barrier-busting fighter for rights among women, LGBTQ+ individuals and minority communities. On Sept. 25, she again made history postmortem, becoming the first woman and Jewish person in United States history to lie in state in the Capitol building.

Lying in state (for government officials and military officers) and lying in honor (for private citizens) occurs when someone’s remains are placed in the US Capitol in Washington, D.C., to allow the public to pay their respects. This tribute is considered one of the highest honors in government service. Ginsburg will be buried in a private interment service to be held at Arlington National Cemetery following memorial services, alongside her late husband, Martin Ginsburg, a tax lawyer and Army veteran who died of cancer in 2010.

Even a glance at Ginsburg’s career shows the phenomenal achievements in her 40-years as a lawyer, judge and Supreme Court justice. A closer look at her life in the many different roles she took serving the public depicts just how much good Ginsburg did in her professional and personal spheres.

Ginsburg graduated one of only nine women in her class at Harvard Law School in 1965, shortly after becoming a mother for the first time. She faced gender-based discrimination from even the highest authorities there, who chastised her for taking a man’s spot in Harvard’s law program.

Her work after graduation began as a law in the US District Court, Southern District of New York. Her exceptional academic record was not enough to shield her from the gender-based discrimination women faced in the workplace in the 1960s, and she had numerous difficulties finding a job until a Columbia professor of hers explicitly refused to recommend any other graduates before U.S. District Judge Edmund L. Palmieri hired Ginsburg as a clerk.

She served as general counsel for the ACLU, her experiences with sex discrimination inspiring her to lead their campaign for gender equality while serving as a strong supporter and advocate of the Equal Rights Act.

At the ACLU, Ginsburg handled sex discrimination complaints referred to her, and envisioned that men and women would “create new traditions by their actions, if artificial barriers are removed, and avenues of opportunity held open to them.”  The ACLU Women’s Rights Project was created in 1972 under Ginsburg’s leadership. As the director of the Women’s Rights Project, she argued six gender discrimination cases before the Supreme Court between 1973 and 1976, winning five.

While serving as a Judge of the US Court of Appeals for the District of Columbia (DC) Circuit, Ginsburg was chosen as a candidate for the Supreme Court to replace Byron White by President Bill Clinton, won the nomination, and was sworn in on Aug. 10, 1993. During her time as a judge on the DC Circuit, Ginsburg often found consensus with her colleagues, including conservative and later Supreme Court Justice Antonin Scalia. Her work with him helping to foster a longtime friendship between the two, despite their radically differing ideologies.

As a Supreme Court Justice, Ginsburg presided over many major cases, fought through numerous rounds of cancer treatments, and aided in several life-changing decisions in law. She was the second woman to serve on the highest court, after Sandra Day O’Connor.

In the 1999 Olmstead v. L.C. case involving people with mental illness being institutionalized in hospitals even after medical professionals stated they would be able to continue their treatment in a community-based program, Justice Ginsburg delivered the majority opinion that sections of the 1990 Americans with Disabilities Act determine that states were required to place persons with mental disabilities in community settings rather than in institutions. This decision marked a historic step for disability rights. Building on the decision, in 2009 the Civil Rights Division doubled down on efforts to uphold the Supreme Court’s decision through a variety of programs.

These cases and many others showcase the wide array of issues Ginsburg advocated for, from education, environmental issues, women’s and men’s rights, LGBTQ+ rights, discrimination issues and many others. On Aug. 31, 2013, she became first Supreme Court justice to officiate at a same-sex marriage ceremony, and eventually was a deciding vote in the Supreme Court’s decision to legalize gay marriage in all 50 states on June 26, 2015. Most recently, she voted in the historic U.S. Supreme Court rule on June 15, 2020 that the 1964 Civil Rights Act protects gay, lesbian and transgender employees from discrimination based on sex.

The court’s ruling was a huge victory for the LGBTQ community and a major loss for the Trump administration, which had sided with employers in three cases before the court.

Until the 2018 term, Ginsburg had not missed a day of oral arguments — not even while undergoing chemotherapy for pancreatic cancer, after surgery for colon cancer or the day after her husband passed away in 2010. The couple had two children together, James and Jane, and Ginsburg was a grandmother of four.

In a statement to be read following her passing, Ginsburg’s granddaughter Clara Spera shared that her grandmother’s final wish was this: “My most fervent wish is that I will not be replaced until a new president is installed.” Justice Ginsburg knew the dangers of the possibility of being replaced during the Trump administration, and fought hard to be present during her hardest moments and against many of the administration’s destructive policies.

Now, facing a Republican congress eager to appoint a new judge to the Supreme Court, Amy Coney Barrett, it’s now our job to carry Ginsburg’s torch onwards and stand up for her ideals for American democracy and the people’s choice, whichever position they may have during and after an election.

Her passion and ideals led her to be a deciding factor on issues that impacted endless lives, and every single person can thank her for working for their rights in one way or another. As a member of the LGBTQ+ community, I have her to thank for my right to marry, and the laws that protect me as queer person and as a woman in my personal life and career. No matter what your background is, Ruth Ginsburg fought for the creation and protections for human rights laws that will stand the test of time, and set the example for future lawyers.

In a time when so many are struggling, lifting up those who serve their communities and are helping people in dire need of help is important to maintaining our decency and understanding of humanity. It is better to stand together in discussion and understanding than to stand alone and angry, especially during times of struggle. One of Ginsburg’s quotes comes to mind: “Real change, enduring change, happens one step at a time.”

So, however you celebrate the life of this monumentally talented woman, whether it be with a few push-ups, a donation, a post or a protest or two, make sure you do it with the people doing the very same work Ginsburg did when she first began as a lawyer in mind. Real people fight for the rights ideals Ginsburg pioneered every single day in small court rooms across the nation, and some might one day be headed for the Supreme Court. They need your support to keep fighting for human rights laws and values.

I believe Ginsburg would want us all to support the people’s rights in every battle, the everyday heroes that exist in our lifetimes, and to fight for what we know to be right. Those every day fighters of human rights are the people we need to make the change we seek. I am grateful Justice Ginsburg existed in mine, and that I was able to benefit and be inspired by her courage and work. Ruth Bader Ginsburg may be gone, but her work will live on in the people she has helped, the lives she’s changed, and who knows, there just might be more Ruth’s out there already than we even know.