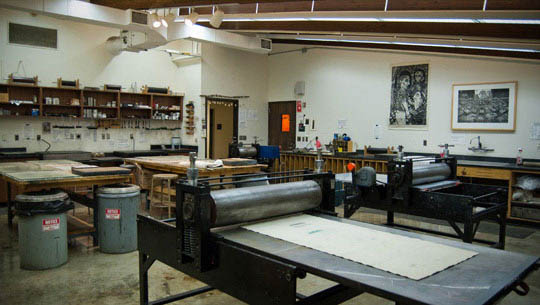 The names Paul Amenta and Jennifer Dunbar may not have rung a bell in the printmaking community before their time at GVSU. The two were merely students with a dream. But, after years of hard work and practice, each has made that dream a reality.

Dunbar’s road to her success was not a straight path by any means. She graduated from GVSU in 2008 with a Bachelor of Arts in Studio Art and took a job as an art teacher a few months later. After a year of teaching, she applied for a management and program analyst position and moved out of Michigan for the job.

Fast forward to six years ago, Dunbar stumbled across a local artist community and applied to become an affiliate of the printmaking studio.

She got a few years under her belt here when she was approached to teach woodblock printmaking courses and took the position. Most recently, a printmaking gallery from the same facility asked her to apply for membership which she was accepted to in January 2020.

Even though many different paths had to intertwine to get her where she is today, Dunbar said it was the skills she learned at GVSU that carried her through the challenges she faced.

“My experience at GVSU was a well-crafted blend of academic and experiential learning,” Dunbar said. “As a result, whatever job paid my rent was supplemented with exploring interests, learning new things and making connections with others along the way.”

Dunbar’s career currently revolves around her printmaking, which she says she has had a passion for since her time in the undergraduate program at GVSU.

Through the artistic process of printmaking, a design is printed onto a “matrix,” a template usually made of wood, metal or glass. The artist creates their design on the matrix using different tools or chemicals, and it is inked so that its design can be transferred onto another surface.

“For the past five years, I have worked primarily in reductive woodblock printmaking and it lends itself well to my favorite playground: mark-making, blending and layering color,” Dunbar said. “I love to travel and photograph places I visit, and when I translate those images to my printmaking work my goal is to give the viewer a sense of being in that place.”

Although Amenta’s current work is not centered solely around printmaking, his experience post-graduation was similar to that of Dunbar’s.

Amenta graduated from GVSU in 1995 with a Bachelor of Fine Arts and an emphasis in sculpture and printmaking. From here, he moved to Seattle and worked for an installation artist which sparked his love for site-specific installation.

“It was one of the first times I was working with an artist personally that was using different materials for each site and then using the site for context,” Amenta said. “It really broke down barriers I had set for myself.”

Following two years in Seattle, Amenta decided to pursue his graduate degree and ended up at the New York School of Visual Arts. He spent eight years here working multiple jobs to afford the costs of living in New York until a friend running a residency program asked him to teach a course. After much convincing, Amenta was able to quit some of his other jobs and agreed.

In 2006 Amenta moved back to Grand Rapids where he was offered a temporary full-time teaching position at the Kendall College of Art and Design and continued to teach there until 2015.

During his first year of teaching in Grand Rapids, Amenta and some of his students put together an initiative called Active Site, a predecessor to his current initiative: SiTE:LAB. Through this initiative, they found abandoned spaces and decided to use them as pop up exhibits to showcase student artwork.

From 2006-2008 Amenta, joined by students and other professors, continued to do projects similar to the first pop-up showcase. In 2009 the group decided to host an ArtPrize project venue where they gathered collaborators and held three events a day for three weeks, whether that be an artist lecture, fashion show, ping pong tournament or a special beer tasting.

After a few more projects and continued success with guest attendance in the thousands, Amenta decided to begin his initiative called SiTE:LAB. The initiative is completely volunteer-based and Amenta works as an organizer.

“SiTE:LAB is an extension of my art practice,” Amenta said. “It’s a social practice that organizes community-based public events or projects. I’m interested in creating a context for the artwork through finding these unique sites and then personally responding to it and inviting others to personally respond to that context as well.”

Along with SiTE:LAB, Amenta does a lot of collaborative work, being sure to never define himself by a certain medium. He said most of his work has to do with the site it is taking place in, whether that be a space suited best for actors, musicians, or artists.

“We’re creating these coalitions of the willing,” Amenta said. “We’re constantly bringing people in that can add value to a project, elevate aesthetic quality, and expand the audience for other people to collaborate. I’m always thinking more broadly. Every single project is unique and different.”

While Amenta is constantly onto new projects and ideas, he said there were two things he experienced at the printmaking program at GVSU that have always stuck with him.

“Particularly in the printmaking department, what stood out to me was the sense of community that was created and maintained,” Amenta said. “To me, that was vital and it’s so important to my practice and what has sustained SiTE:LAB in particular over the last decade.”

Dunbar agrees and said the sense of community created helped to develop her love for the program as well.

“GVSU printmaking was more than a program, it was a community,” Dunbar said. “We shared meals, critiqued each other’s work, gave each other pointers and lent each other resources. My recollection was that we didn’t take ourselves too seriously and it fostered a safe learning environment.”

Along with this, Amenta said he GVSU taught him to always be tenacious, and never give up.