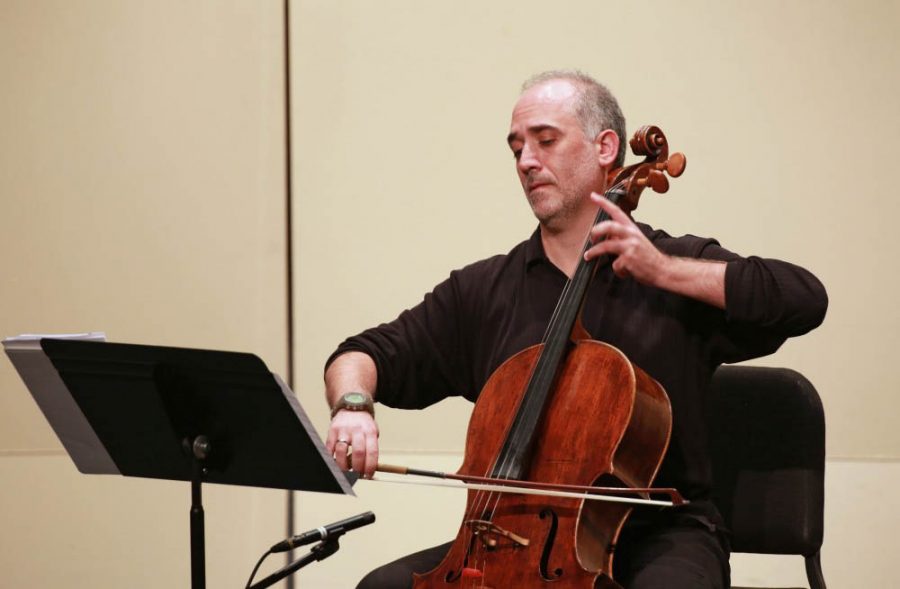 With two concerts down and four to go, Grand Valley State University Professor Pablo Mahave-Veglia of the Music, Theatre, and Dance Department is holding six concerts this fall in a series titled “The Complete Bach Cello Suites in Six Concerts.”

Mahave-Veglia’s inspiration for this concert series took root during his sabbatical in Chile in the winter of 2020. It was there that he had been conducting a research project and was set to travel throughout the country performing until the COVID-19 pandemic set in.

Plans changed, all concerts were canceled and Mahave-Veglia spent almost six months in quarantine with his 92-year-old father. Finding himself unable to turn to soccer for entertainment due to the worldwide ban and lacking internet connection, he decided to play his cello.

“It started as a personal project and for my dad to have something to listen to on long afternoons,’” Mahave-Veglia said. “But then I thought I could actually share this with the GVSU community in some way. I came up with the idea in June or July and talked to the administration and they were all excited about the possibility.”

He said that although being unable to collaborate with other artists was a struggle at first, the opportunity to experiment with solo cello pieces was one that he ended up enjoying.

“I was stuck in a vacuum-sealed house,” Mahave-Veglia said. “As a performer since I was six, my nature is to be collaborative and play music with other people. Those six to eight months were anything but collaborative. So, I began to learn the Bach Suites — just cello by itself. It’s music I’ve always loved because it can be played, understood and analyzed at any level of development.”

Fast forward to two concerts having been performed already, Mahave-Veglia said he is very happy with how they unfolded and uses them as a form of self-therapy.

“I thought they were great,” Mahave-Veglia said. “It is a very selfish project where I do this for me as well. It started as a way for me to stay current, and it is a logical way for me to now share it. I enjoy being in a situation like this; one where people are benefiting and there’s also a benefit to the performer. We need a release for these things with everything going on. It’s like self-therapy.”

Aside from the first concert being held outside, all future concerts are taking place within different performance halls, the Art Gallery, and other areas all located throughout the Thomas J. and Marcia J. Haas Center for Performing Arts.

A small in-person audience is able to attend the concerts but there is a limit on the number of attendees based on the location of that particular concert.

Even though it is a smaller audience, Mahave-Veglia said people seemed to really appreciate it, and there hasn’t been a single attendee that didn’t speak with him afterward about the concert.

“When you’re in a room with only five or six people it creates a sense of privilege and intimacy,” Mahave-Veglia said. “It feels like people have taken time to come to my living room for something I like to do. Concertgoers have recently been on diet without going to events. Seeing another human being in front of them is good for them and for me.”

For those that are not able to attend the concert in person, they are being livestreamed to the department’s Instagram page, @GVSUmtd. Mahave-Veglia said that even though he wishes the experience of an in-person concert could be felt through a livestream, it is still a good opportunity to get people involved.

“If you’ve ever seen both a livestreamed concert and a real concert, you’ll know it’s not the same experience,” Mahave-Veglia said. “It’s a substitute. But, it’s the best we can do during these circumstances and it gives you a sense of what you’re missing.”