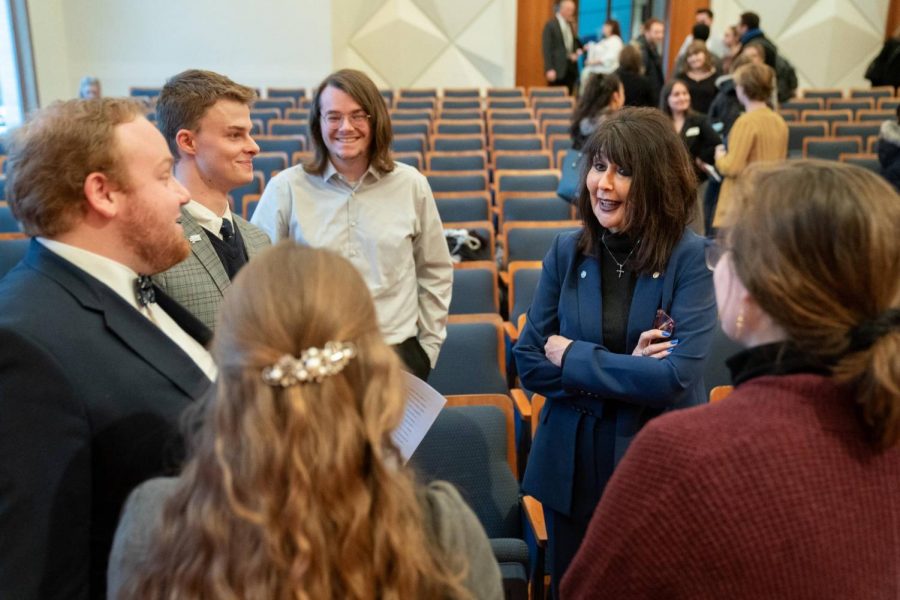 For the first half hour of student senate’s first general assembly meeting for the 2020-21 school year, Grand Valley State President Philomena Mantella took some time to honor the new senators and answer questions the body had regarding GVSU’s COVID-19 response, online classes and more.

“I congratulate all of you on taking these seats of leadership, congratulation has a companion and that’s gratitude,” Mantella said in her opening address. “These are big roles, and substantial opportunities for those of us who care about this institution.”

In that opening address, Mantella gave an update on the university as a whole, which she mentioned has been hard than ever with everything going on in the world right now, emphasizing the flexibility students have regarding attending class either in person or online.

“When people ask me to give an update on the university, it’s challenging these days,” Mantella said. “There’s so much going on, there’s so much in flux, there’s so much in front of us nationally and in our communities. No one of us experiences today, with the limitations that it offers to our lives, exactly the same way. Being able to provide as much choice for students who feel uncomfortable physically coming onto campus or uncomfortable being fully online have opportunity to make the best choices for them.”

After briefly bringing up economic impact on students during the pandemic in her speech, one senator asked lessening the costs of tuition, housing and meal plans, due to a lack of services that would normally be provided pre-pandemic.

Mantella answered the senator’s question bluntly, saying that although tuition costs have gone up, her goal from the start has been to give students all the resources possible to advance in their academic careers, even though campus life looks much different than it did last Fall.

“It’s been a very difficult year financially, because all of the testing… decreased class size and increased faculty, the costs of the institution are way up this year to mount our experiences,” Mantella said. “(With the pandemic,) it is not an equivalent experience for our students on campus, but we want to provide students with an equivalent academic experience and provide the same support and services to keep you moving in your learning journey.”

After Mantella’s departure, President Kelly Dowker gave her president’s report, highlighting that a change regarding parking on campus that originated in Student Senate had been passed in the faculty senate. This change is allowing pregnant and newly-parenting people to request a temporary, 3-6 month parking pass that allows them to park closer to the handicap spaces.

“This is pretty cool,” Dowker said. “A couple years ago, a student senator proposed parking for pregnant and newly-parenting people, and then (University Academic Senate) passed an endorsement of this idea. I was really happy that they passed that because it used to be a student senate project.”

After the president and vice president’s reports and some a brief presentation laying out how new senators should act professionally, the senate voted to reinstate three subcommittees that all had active participation last school year.

Not only will the Sustainability Subcommittee (SUS) and the Mental Health Awareness Subcommittee (MHAC) be reinstated, but so will the Sexual Assault Awareness Committee (SAAC), who last year passed legislation to require that all women’s restrooms on campus be stocked with feminine hygiene products.

Student senate cabinets will move their weekly meetings to Sunday night, while the General Assembly meetings will continue to happen every Thursday afternoon, starting at 4:30 p.m.