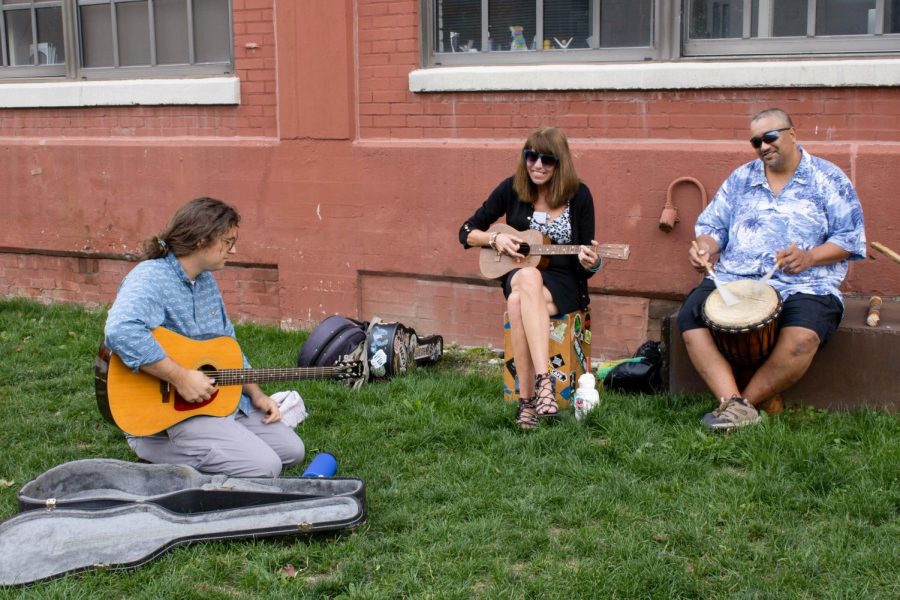 Visual performers and artists presented their art on the move at the Rapid Art Movement. The Avenue for the Arts event adapted to social distancing guidelines and innovated the way art can be viewed by audiences.

Saturday, Oct. 10, artists rotated throughout the stations scattered around the Monroe North Neighborhood. From 3-7 p.m., the public was welcome to enjoy the local talent performing along the sidewalks.

One of the Rapid Arts Movement participants was the Grand Valley State University Time Studio, a course offered in the Visual and Media Arts Department in the Visual Studies area. The class consists of six students, all whose work was featured in the event. Time studio focuses on the element of time in art. Professor of the Time Studio course Sean Carney described the projects as pieces that “unfold for a viewer.”

Coincidently, Carney’s first project for his students aligned with the Rapid Art Movement’s initiative, which is to create art you can move with. Time Studio students each created a sound piece that incorporates a mix of field recordings, appropriated audio and other forms of music and noise. The results showcased the individuality of each artist.

“It is interesting how they have the same assignment but the pieces are so different based on that artist’s critical concerns, conceptional interests and how they make art in general,” said Carney.

Kristin Fowler, a junior in the Integrated Studies program and a student in the Time Studio course, said, “What I have appreciated so far with the work that we have done in this class is that it gets to be really playful.”

She said she enjoys being able to “play” with sound and treat it like an object that is eventually turned into a piece of art.

Fowler’s Rapid Art Movement Piece is titled “Unknown” and incorporates sounds from her everyday life. Fowler brings together sounds that are soothing to her, including birds chirping and the wind blowing. She does her own vocals in the piece and wrote and composed piano music. She describes the piece as an “ode to listening”.

“The Premise of my piece is that in any given moment there is noise all around us and some of it is heard, some of it is not,” Fowler said. “If we pay attention, the world is, and can be, full of magic and whimsy, and for me, I can access that when I really pay attention in my daily life to the things that are going on.”

As people walked the Monroe North Neighborhood, they could listen to the work of Fowler and her peers. The Time Studio’s soundscapes are compiled on a Bandcamp Playlist. The link to the Bandcamp was printed on the maps of the Rapid Art Movement. The playlist is intended to be listened to while experiencing the rest of the art at the event.

The idea of the project was for students to create soundscapes that could be listened to while on a walk. Fowler said this guided her through the making of her piece.

“Since I have outside noises in my piece, it sort of blurs the line between what you’re hearing in your headphones and what you’re hearing outside in the actual world,” Fowler said. “It shapes the world around you which is one of my favorite things about music and sound.”

The Rapid Art Movement was the first art event specifically built and designed to be socially distanced. Carney said the art community is always ahead of its time when it comes to innovation and problem-solving.

“It shows that we can continue to create and express ourselves and provide a way to experience art,” Carney said. “Even when the physical institutions aren’t safely able to do so, artists will figure out a way. They always do.”