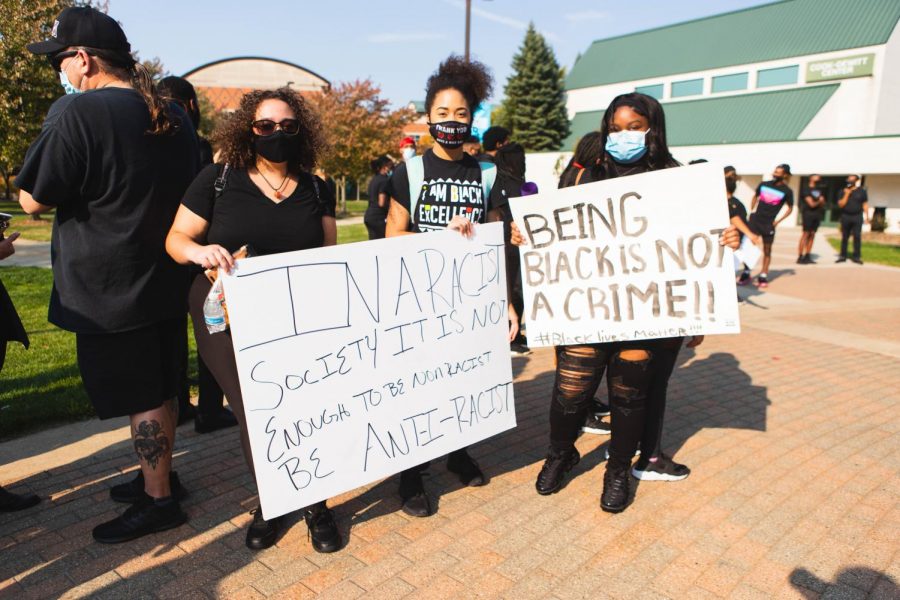 A crowd of students, faculty and staff gathered around the Cook Carillon Tower Thursday afternoon before marching through campus to speak out about a lack of support for Black students at Grand Valley State University.

The protest, which was organized by members of GVSU’s Black Greek Council and Multicultural Greek Council, began with a moment of silence among a black-clothed crowd. Fists raised in the air, a sea of attendees peacefully stood in silence until co-organizer and National Pan-Hellenic Council President Shantiera Carprue announced it was time to march.

Clad with a bullhorn, Carprue and co-organizers started marching from the tower toward the Little Mac Bridge, taking a full crowd to North Campus before looping back to where they began. The winding queue of protestors echoed chants down the row, declaring that Black lives matter and reciting the names of Breonna Taylor and George Floyd. That movement, Carprue said, was surprising, especially as their presence made history on campus.

“People came out in a big way,” Carprue said. “Obviously on this campus, I’ve never seen a march or anything this big, so I’m proud. I love the Black community.”

The return to the clocktower concluded with a final expression of thanks from organizers before celebrating with song and dance. Co-organizer and Sigma Lambda Beta President Martez Lopez said one of the goals for the protest was to powerfully speak up about the Black experience on campus while demonstrating a peaceful protest that was proud to stand together.

“I wanted to do this to help change that narrative that these are peaceful protests, that we’re out here doing this because we want to see a change,” Lopez said. “We are not a threat to anybody when we speak out against something wrong.”

Lopez initially began planning the protest after seeing national unrest and discussing it with his fraternity brothers. He was then connected with Carprue where joint planning began in August.

Initially, the protest was set for Sept. 23, but the county’s Staying in Place order pushed the date back. The delay sparked more issues from continued national strife to local examples of insensitivity like the “ghost photoshoot” trend denounced by the University.

Prior to protest day, organizers didn’t know what to expect, but it certainly wasn’t hundreds of protestors turning out. Carprue said that at a predominantly white institution at GVSU, seeing at least one white student to support every Black student in attendance would be important. The reach was far wider.

“What I expected was just Black students…,” said co-organizer Amber McIntosh. “(But then) faculty from administration, athletes, and so many different people that got to Allendale today. I just feel like this shows that Allendale can change the atmosphere and change the spectrum of Allendale in making it more diverse and inclusive.”

That goal Carprue set was superseded as notable turnout from University employees, student athletes, and community members and their families all stood together.  Even GVSU President Philomena Mantella walked among the crowd.

Seeing administration especially show up was heartening as organizers called on them to stand by diversity messaging and do more than just sending emails. Co-organizer Collin Lewis said the first step toward making meaningful change on campus is having leadership listening to concerns and taking action moving forward.

“Honestly, it’s great to see the faculty, staff and administration standing by what they say,” Lewis said. “Diversity at Grand Valley is not as stressed as it needs to be, but we can still have events like this. It’s possible, so for that reason, we need to keep this up.”

The importance of allyship like that demonstrated at the event is that it breaks down the bystander effect, Lopez said. That rhetoric was popularized by those who let the bystanding officers in the Floyd killing off the hook because they didn’t directly kill him. That inaction was what led to Floyd’s death.

“It’s frustrating to see people see someone die with a knee on their neck for nine minutes and say, ‘Oh, if he can talk, he can breath,’” Lopez said. “Well obviously he couldn’t breathe because he’s dead. He’s dead now and he’s not coming back.”

Above all else, Lopez said he was focused on creating a movement on campus that would be historic. With no comparable protest of that size in recent years, Lopez knew that the march would be iconic.

“We knew that this was something that was going to make history on this campus,” Lopez said. “We said that when we started to walk out, like, ‘Are you ready to make history?’”

The march Thursday was a first step in many toward making change in Allendale, and organizers agreed that there would be more events like this protest. But as for their goal of being heard, McIntosh said the crowd was loud and clear with their message: Black lives matter.

“I feel like a lot of people hear us,” McIntosh said. “As far as Black people, they hear us, they see us and they are here with us. With that being said, hundreds and hundreds of people came out here to show solidarity that Black lives do matter.”