The songs that shaped Sean Miller 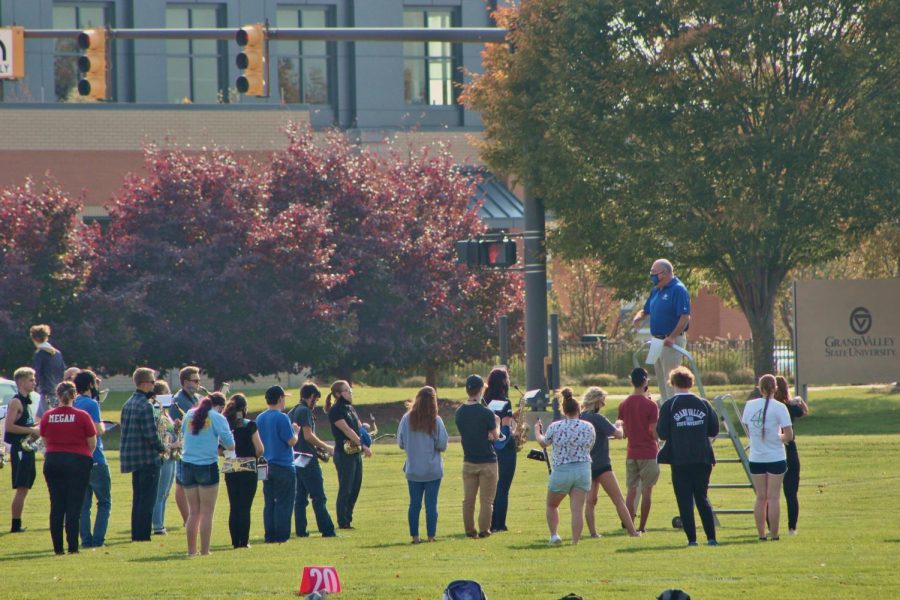 Alto saxophonist Sean Miller took the role of a Laker Marching Band drum major last year as a sophomore and continues to lead the band throughout this school year. But this is not where his musical journey started.

Miller’s passion for music shined throughout his childhood, continuing to develop as he grew up. At 20 years old, Miller has been able to reflect on his life and the musical influences that brought him to where he is today. Since Miller’s life has always been so intertwined with music, he ties valuable memories and relationships to a handful of songs.

Inspired by Pitchfork’s 5-10-15-20 series, Miller shares some of the most important musical influences throughout his life.

5- “Life is a Highway” by Rascal Flatts

The main reason I love this song is because around this age I was big into “Cars.” I really loved the Cars movie and I had so much of an obsession that I bought the CD (yes the CD) and I would play “Life is a Highway” over and over again.

Every time I was in the car, I would ask my mom to put the CD in and play “Life is a Highway” and she kept doing it even though she has heard it enough times. I was telling her about this article and she said, “Oh ‘Life is a Highway’ for sure. You would not stop singing that until you found another song.” Music has definitely had a big impact on my life ever since I was very young.

One big thing that private schools did was all-school masses on Fridays where the band would play the songs throughout the mass. At one point, he chose me and he said, “Hey, you should solo on this piece. You’ve known the song for a while, and I think you’d be really good at it.” At that time, I didn’t have that much confidence in myself but he pushed me to be the better version of myself and gave me the confidence that I didn’t know I needed.

When eighth grade happened, all the eighth graders had a solo piece, and mine happened to be “Für Elise.” When I played that, I finished and I walked up to my director and he just gave me the biggest smile and hug and said, “I’m gonna miss you, Sean.”  That really hit me because it really means a lot just thinking about that song, and about that time of my life and how he was able to build me up because he knew that I had it in me. I really appreciate that man.

After eighth grade, I transitioned to a public school, which was Pinckney High School.  I didn’t know anyone at the public school, maybe one or two people tops, but I wanted to get out there because I am a very active person. I joined the Pinkney Marching Band and I played alto saxophone.

The end of sophomore year was when they had auditions for drum major. We had to do a bunch of interviews and all these different tasks, but one of the things we had to do was conduct a song in front of the entire band, so that way people could vote and see who they wanted.

The song that I had to conduct was “My Songs Know What You Did In The Dark”, and I was going against my best friend at the time, Chris Randall. We were and still are great friends and he really helped push me.  I’ve noticed that I have a great group of friends and I really appreciate that because we challenge ourselves and we know we can make ourselves better. When he lost, he congratulated me and I was a good sport about it, and I became drum major of Pinckney High School junior and senior year.

Then, I got accepted into GVSU and I decided to join the marching band here. For my first year here, I was part of the alto saxophone section. When the season was over, I loved the atmosphere, but I felt it could be better, so I decided to go for drum major.

It’s a big process here to become a drum major. You have to do a lot more to get it than what we had to do for high school, which is very understandable. The main point is, the song that I got to conduct my freshman year was also “My Songs Know What You Did In The Dark.”

Anytime I think about “My Songs Know What You Did In The Dark,” I know it somehow has a tie with me. Knowing that that song popped up again gave me the sign that I needed to keep pushing myself. At that point, it was the last round of auditions. When I saw that song, I felt like it was a sign that I needed to keep going and trust that I knew that I could get it, and here we are in the present and I am still the drum major at GVSU.

Because 2020 has been insane, my best friend since high school, Olivia Welling, showed me this song. We have been best friends since high school and we both share our passion for music. It might not be that we’re majoring in it but we have a big passion for it, and her family is very musically talented. So much so that her father, Kevin Welling, was the jazz band teacher at Pinckney high school and he filled in for my band director whenever she wasn’t there, so I am very close with her family and the music program at Pinckney.

I chose this song because Olivia showed it to me. When I heard it for the first time, I was like, “Wow, I really love this song,” and this was back in January. I had listened to their albums before, but I hadn’t come across “Cough Syrup.”

What I really like is songs that don’t tell. In the way of showing versus telling, I feel like “Cough Syrup” does more showing rather than telling. It paints a picture and it reminds you that, yes, life is stressful, but you just have to remember that one line: “life’s too short to even care at all.” It just reminds you that, whatever you’re stressing over, just take a breath and realize where you are.

Because of that, I listen to it every day now. It gets me motivated and it reminds me of why I’m here, why I love the marching band and why I am pursuing my degree.

It’s a nice reminder that I always have Liv. She’s my rock and I know that I am going to be best friends with her until the day I die. As soon as she showed me that, she was like, “This has to be our song” and I was like, “This is our song.” Every time we play it, we just laugh at each other as we’re in the car, with the window’s down and singing it out.

It reminds you of how wonderful life is and how you should live your life with risks doing what you can because if you’re too comfortable then you won’t grow. And my biggest thing is, I know everyone can always grow. Because if you feel too comfortable then you will fall back and start self-doubting yourself again. I love being challenged and this song just sparks a lot of memories with that.