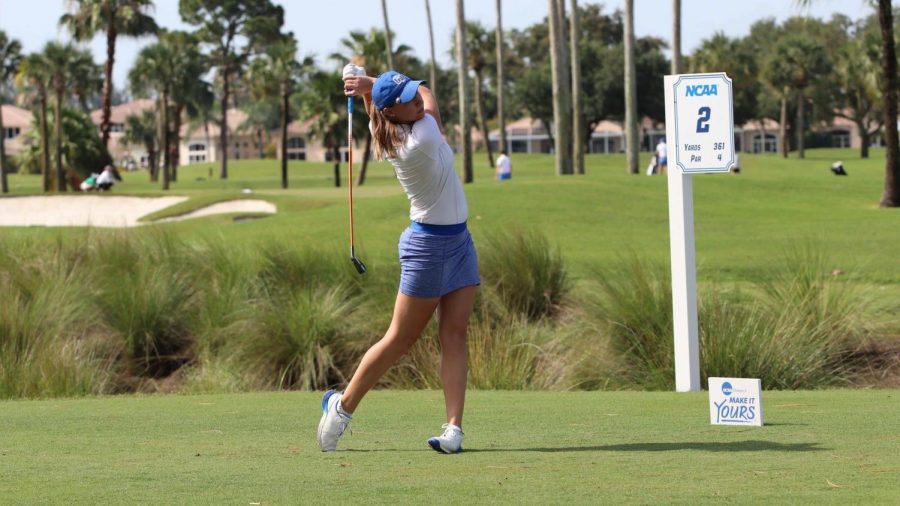 With GLIAC athletics taking a hiatus this 2020 fall semester, most fall sports have not seen very much action, if any at all yet. However, a few golfers on the Grand Valley State University women’s team have found outdoor tournaments to compete in outside of GVSU.

Senior Katie Chipman participated in the PohlCat 36-hole tournament in Mount Pleasant last Sunday, Oct. 11, alongside freshman golfer Megan Miron. Chipman placed third overall with a score of 76-74 and Miron shot an 80-73 to claim fifth. With competitions few and far between circulating the sports world, the women were excited to be able to compete in these tournaments, as well as for the opportunity to practice for a potential spring season.

“It was a very unique golf course to play,” Chipman said. “The weather wasn’t too bad, so that was nice. Overall it was just fun to compete and to kind of get back out and play again because our last tournament was back in August.”

Chipman and Miron also paired up a week earlier, on Oct. 6, at the Eagle Eye GCAA Tournament in Bath, Michigan. The duo finished tied for twenty third at the event with an overall score of 273 and 15 shots over par. While Chipman has been busy the past few weeks, the opportunities to play have been thin.

So far, the golf team has been practicing regularly during weekdays in small groups at the Meadows Golf course on campus, as well as wearing masks and limiting contact with each other. Chipman said they’ve had a pretty good fall, considering the circumstances. Despite GLIAC fall sports being on a break, the women have been playing for qualifiers and keeping it competitive within the team.

Looking back on last year’s debacle with spring sports being canceled at the turn of a dime, Chipman is actually using her extra year of eligibility right now, along with a few other girls on the team. With no sports happening this semester either, the uncertainty of what might happen after this year is a little reminiscent of season.

“I honestly haven’t thought about if we have a season that much,” Chipman said. “I’m just trying to work on the game right now and make more memories with the teammates as much as we can. It’s just so uncertain right now and we’ve been playing the guessing game for months. So what if we didn’t play all fall or didn’t play all spring, then what now?”

As hard as it is on athletes like Chipman to be left wondering what will happen next season and even next year, Chipman said she’s just grateful for the opportunity to continue playing with her teammates at a competitive level. As a second-year senior, this is probably not what she had envisioned for her final year at GVSU.

She is however making the most of what she has been able to participate in. Her last wish as a Laker looking toward graduation is similar to what most GVSU athletes want now more than ever: to go and compete with her team one last time. But for the time being, she can only hope this comes true for athletes in all sports before the end of the year.