To be or not to be: Shakespeare Festival adapts amidst pandemic 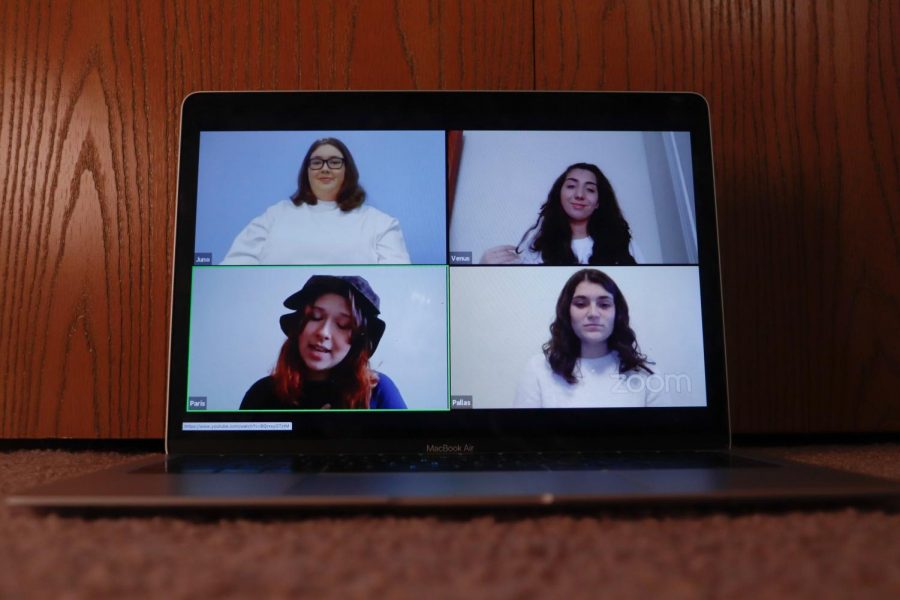 Due to the COVID-19 pandemic, there was only an abbreviated version of the festival consisting of two different events. However limited they may have been, James Bell, Managing Director of the festival and GVSU Associate Professor of Theatre, decided it was essential that the show go on.

Typically the Festival Greenshow would kick off the weekend of Shakespearean shenanigans, and this year was no exception to that. Even so, instead of taking place on a weekend, it happened in the middle of the week, and instead of a live show, it was a livestream.

The show, titled “The Arraignment of Paris,” was a 10-15 minute script that guided the audience through a competition between the three Roman goddesses that began the Trojan War.

It took place on Oct. 21 and was livestreamed on GVSU’s website through Zoom. There was one performance at 5:30 p.m. and another at 7:30 p.m.

Each actor was in a very simple costume that was either white, navy blue or black, and all were sitting in front of a single-toned background with the light facing them.

The preparations for this midweek show began in the winter semester of 2020 where both Bell and the director of the play, senior theatre major Marcus Chapman, had the idea that the performance would be live.

“(Bell) gave me five or six plays to choose from,” Chapman said. “When deciding we go through a cycle of shows that rotate every four years. (‘The Arraignment of Paris’) is one I liked most out of the group and we hadn’t done it in about seven years. It sounded like it would be the most fun and entertaining play out of the bunch, which is the main point of the Greenshow.”

In July, when both realized it would not be possible to hold an in-person performance, they began to make adaptations to the script and plan for a modified event.

“Marcus was really interested in the play and I didn’t want to cut off his idea to do that,” Bell said. “We also didn’t want to take away opportunities for newer students to get involved with the festival. So, we decided to figure out a way that we could still have a live audience for it.”

Bell said they used Blackboard to communicate with students, and in order to remain as safe as possible, the audition process for the show was done entirely through Zoom.

Students were given lines to read and the option to select their preferred audition time. They then met individually with Chapman and the stage manager to give it a go for their desired role.

Following auditions, rehearsals began and took place three days a week for one hour at a time. These meetings were also conducted entirely over Zoom.

Chapman said that even though it was challenging for the students to adapt to such a new way of interacting with their castmates, some pleasant surprises came about along the way.

“There’s one part of the show where an apple is passed amongst the goddesses and we had to figure out a way to pass it from screen to screen over Zoom,” Chapman said. “I found that a show done like this is entertaining in a different way. It doesn’t lose any value as a theatrical piece. It’s not the same feeling as live theatre, but it still feels like theatre to me.”

Bell agrees and said he also enjoyed finding out new ways to put together a theatrical piece in a virtual setting.

“One of the funny things is that we realized livestreaming a Zoom call does more things than we expected,” Bell said. “On the livestream, if someone is muted, they disappear. So, it makes virtual entrances and exits for our characters totally possible. It is a different kind of environment, but there are different things you can do and control that we hadn’t expected.”

For those that were unable to attend the livestream, a recording of the show will be posted to the Shakespeare Festival website, www.gvsu.edu/shakes, and on the Festival YouTube account.

The Shakespeare Festival will also still be doing their touring production, Bard to Go, which is a 50-minute program of theatrical scenes in a modified way. This year, it will be featuring the show “Lovestruck” which will be recorded and made available for schools to show students for free.