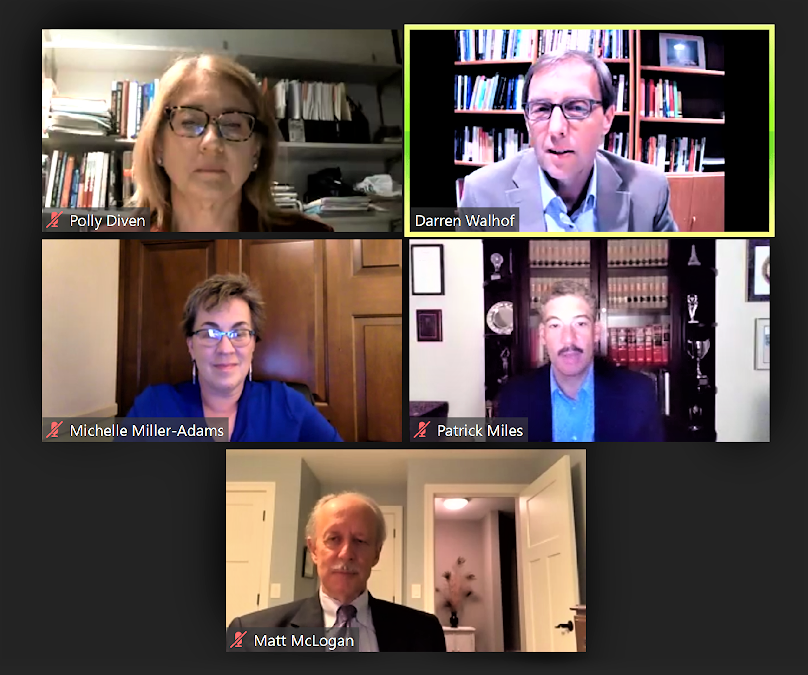 During the virtual event, four speakers and a moderator discussed the challenging political climate of 2020. (GVL/ Katherine Arnold)

On Oct. 22, Grand Valley State University’s Hauenstein Center for Presidential Studies and the Political Science Department co-hosted a virtual webinar on a very important and pertinent topic: the country’s political landscape and the upcoming election.

“Voting is not only our voice, but both the purpose and test of our democracy,” said Samuel Jacobs, a junior studying political science and Cook Leadership Academy candidate who introduced the panel.

This certainly couldn’t be more true in 2020, a year where it feels like everything people thought they knew is being tested every day.  The panel sought to have an engaging and open discussion on 2020’s unique political atmosphere, how to vote in an informed and educated way, and most importantly, how to navigate the current political climate without feeling lost in a place of partisanship wars.

Each speaker had their own topics, using their expertise to highlight the importance of the conversation they brought to the table. For McLogan, this was how knowledge of past elections can inform current knowledge as the country gets increasingly closer to the Nov. 3 deadline.

One highlight from his discussion was how President Donald Trump won the majority in Michigan at only 47.5% of votes — less than half of the state. It is important to consider how significant the amount of third party voters were, even at only 6% of the total vote. That’s not to mention those who left the presidential voting bubbles blank entirely, which contributed to Trump winning the battle between himself and Hillary Clinton by 0.3%.

The second speaker was Diven, who spoke on the topic of foreign policy. She stressed the importance of paying attention to how each candidate approaches diplomacy with other countries, even when their presidential campaigns don’t seem to focus on them at all.

“The president has the power to move troops, grant recognition to foreign countries, open and close embassies, to appoint ambassadors and cabinet posts, and to make and break executive agreements,” Diven said. “Presidents have a lot of foreign policy power and it is important to think about that when we vote.”

With Trump, voters are able to ascertain what his outlook towards foreign policy is like with his past actions. He has withdrawn the United States from both the Intermediate Range Nuclear Force (INF) treaty and the World Health Organization (WHO). His approach with foreign diplomats and leaders have been highly irregular in comparison with the last four U.S. presidents in both his mannerisms and policy. As for Biden, his opinions about foreign policy seems to be one of returning to past professional and diplomatic approaches.

The third speaker, Miles, focused on how the United States has found itself in a sort of political crossroads.

“This is probably the most consequential election in my lifetime,” Miles said. “Facing issues like COVID-19, economic problems, unemployment highs, poor racial relations, mistrust in law enforcement and even foreign cyber threats. I believe in putting the country over political parties, and believe this is also necessary in our elected officials.”

The current generation has seen a drastic shift for strong partisan focus, with a highly intense focus on loyalty to parties at the cost of ignoring or speaking against worthwhile laws and policies. Miles explained this as a shift of personal focus; politics have become a way of pursuing policies and laws for the betterment of ourselves rather than the greater good.

Last but not least, Miller-Adams discussed the current economic climate and the benefit of higher education to the American work force. As a whole, 2020 has seen a dramatic and horrifying increase in unemployment rates, rising from 3% to 15% in only three months. As of September, the unemployment rate has rescinded to 8% — better, but still concerning.

“The pandemic will change the economy in fundamental and lasting ways,” Miller-Adams said. “It’s already clear that some of the jobs that have been lost will not return. In order to succeed in the post-pandemic economy, individuals need access to affordable post-secondary education and training.”

Add to that the presidential opinions about higher education and we see an interesting outlook on the debt of the average American citizen. The Trump-Pence campaign offers little information about higher education besides tax breaks for businesses, while the Biden-Harris campaign offers extensive and thorough discussions of workforce training and partnership programs for colleges, increasing the Pell Grant limits, and reforms designed to make the repayment of student loans easier for American citizens.

In the political polarization of 2020, where every successive disaster seems to separate more than unite Americans, it is important that everyone understand both where their information is coming from, and how to contribute their own voices to the national discussion.