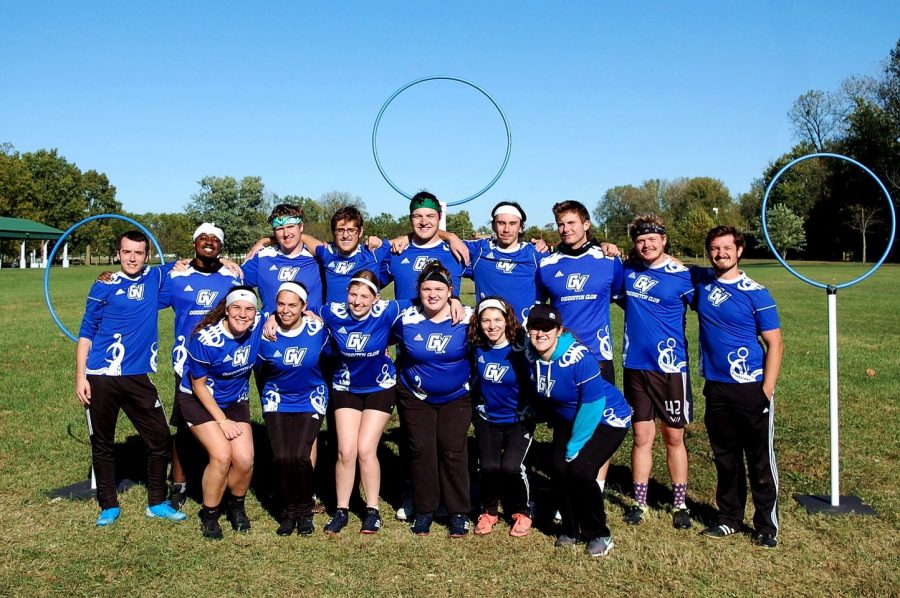 It’s relatively commonplace for real life sports to be depicted in fiction, but it’s not every day that a game originating in fiction finds its way into real life. What was once a sport for magical beings in the “Harry Potter” book and movie series is now a thriving club sport at Grand Valley State University. GVSU Quidditch is hoping to expand their team this year as an opportunity to get out and be active during quarantine.

“We can’t fly like they do in the books, but we sure do have fun,” said Quidditch Team President Sarah Maxey.

Matches are played on a large rectangular pitch with three ring-shaped goals of different heights on each side. Matches are played between two opposing teams of seven players each: three Chasers, two Beaters, the Keeper, and the Seeker.

“It’s kind of a mix of rugby, dodgeball, a bit of basketball and a bit of wrestling,” Maxey said. “There is always a lot going on.”

The Chasers and the Keeper respectively score with and defend the goals against the Quaffle; the two Beaters bat the Bludgers away from their teammates and towards their opponents; and the Seeker locates and catches the Golden Snitch, whose capture simultaneously wins the Seeker’s team 30 points and ends the game. The team with the most points at the end wins.

Typically, GVSU’s Quidditch team plays against schools across the region and even nation, but this year, there are traveling restrictions due to COVID-19. The team can no longer travel and face other teams, but that hasn’t stopped them from playing. The Quidditch team still hosts practices on Mondays from 7:30-9:30 p.m. and Wednesdays from 6-8 p.m. Wanting to keep the game safe during the pandemic, the GVSU Quidditch team has been hosting their practices outside on the GVSU Allendale campus.

“We recognize that people aren’t necessarily comfortable with being around other people,” Maxey said. “But we want to give everyone the chance to do something outside of their apartments.”

The team is wearing masks when they are within ten feet of each other and are trying to keep practices as safe as possible.

“If one of our players were to walk away for a bit, they are allowed to take their masks off and breath,” Maxey said. “If we were in the Kelly Sports Center, we would have to wear masks regardless at all times.”

The Quidditch sport was invented by author J.K. Rowling for her fantasy book series “Harry Potter,” where it was played by witches and wizards riding flying broomsticks. In the real world, the sport has been around for 15 years, and at Grand Valley specifically for over five. On the GVSU Quidditch team, there can be 21 total players on the roster.

“It has grown a lot since it first started,” said Maxey.

On Oct. 31, there will be a football watch party “Kickoff in Kirkhof” from 12-2 p.m. in the Kirkhof Center’s Crave. GVSU Qudditch will have a table set up with information about Quidditch as well as hot dogs, chips and drinks.

“It is kind of a recruitment event,” Maxey said. “A lot of people don’t know who we are or what we do. They just think we are Harry Potter nerds when actually we are a legitimate contact co-ed sport.”

Maxey says anyone can join the team and there is no previous experience necessary. The GVSU Quidditch team is looking to expand their roster and create a strong foundation for next year.

“We want to stay active and be around people in an acceptable socially distanced way,” Maxey said. “Quidditch is the perfect way to do just that.”