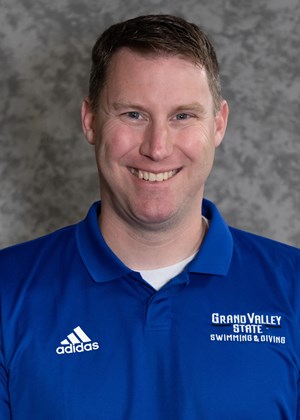 Coming into his fourteenth year as head coach of the Grand Valley State University swimming and diving team, there is no doubt that Andy Boyce is arguably one of the most successful coaches in the school’s history. He has taken the program to new heights, with t10 GLIAC titles with the men’s and women’s team combined. He has won nine GLIAC Coach of the Year awards. So far, Boyce’s record with the team is 155-47-1.

Boyce started his successful swimming career at a very young age. His parents put him in swimming lessons until he was eight years old and ready to join the swim team. He continued to excel in swimming with training during the summer and even starting coaching at an early age. At 15, he became a lifeguard and coached younger club teams during the summer. In high school at Grand Rapid Northview, Boyce was voted most valuable player of the team three times and was a two time all-state honoree.

He continued his swimming career at Ball State University where he went on to beat the pool record in the 200 and 400 medley relay. It wasn’t until last year that his 200 record was broken. During his freshman year, Boyce continued to coach high school teams and club teams. His love of coaching led to his decision to switch from a business major to education. After he graduated, he taught fourth grade until he came back to coach at Ball State.

His former college coach asked Boyce if he was interested in being a graduate assistant for the Cardinals. Naturally, he accepted the offer and enjoyed his time working with his former coach for two seasons. Following his second year as graduate assistant, he sent his resume around the country and ended up coming back to his hometown of Grand Rapids. He would begin his long tenure as a Laker with GVSU.

“Obviously Grand Valley stood out,” Boyce said. “They were dominant in the division two level and their support for athletics was unbelievable. The coaching staff was great too. It stood out from day one.”

Boyce coached under Dewey Newsome for his first three seasons with the Lakers. Boyce learned new techniques for different strokes from Newsome and they matched up excellently together. In his first year with the team, Boyce and Newsome led the Lakers to their first ever conference championship. After Newsome retired in 2007, Boyce was named the second ever head coach of the GVSU swimming and diving team.

“It was unbelievable being named head coach,” Boyce said. “It’s such a great school and great team that continues to grow and get better and better. I couldn’t be happier where I’m at.”

Since taking over in 2007, Boyce has led his swimmers to a total of 622 All-America honors. The team has never finished lower than second in the GLIAC standings. In 2019, both the men’s and women’s team won the division. In the NCAA tournament, the men finished fifth in 2019. The list of accolades and accomplishments the Lakers swimmers have achieved under Boyce could stretch the length of the pool they compete in. Boyce and his staff have found the formula to winning.

“There’s no secret to our success,” Boyce said. “It’s the closeness of our team. It’s like a family away from home. Our team is hardworking and we have a great culture. Even when the players aren’t here on campus in the offseason, they’re always striving to be better. They look out for each other and work hard as a group.”

Perhaps the greatest of these accomplishments under Boyce is the fact that all 82 pool records have been broken under his tenure.

“We just keep them rolling in,” Boyce said. “Our oldest record is the 200 free relay that was broken in 2009. Other than that, all of our other records have been broken in the past five years. Those records keep getting faster and faster. We’re always looking to improve our technique and to improve our coaching. We go to conventions and tap the brains of other coaches from around the country. We always try to get our team to be the best it can be.”

Boyce has also kept his team academically responsible. The Lakers have been rewarded with 12 Scholar All-American team plaudits for both men and women.

“They’re very disciplined in their swimming and diving,” Boyce said. “They’re coming in for morning practices and coming in the afternoon too. They’re working with weights and then doing dryland training. Their schedules are very strict so they have to block out the distractions. We have good support from our upperclassmen too, by holding our younger players accountable. They have great time management skills so it makes my job a whole lot easier. I don’t have to worry about any of their grades.”

With one of the most diverse rosters at GVSU, Boyce and his staff have had their fair share of struggles staying connected to their players from all around the world during the COVID-19 pandemic. They’ve been keeping up in Zoom and Skype meetings. When it comes to his players who are on and off campus, he always makes sure to keep them in the loop with any new information that comes into his hands during the pandemic.

When the fall 2020 semester started, the team got off to a later start than usual. The Ottawa County “Staying in Place” order made it difficult for his team to meet and practice. Things are getting back to normal now and the team had their first races of the year last week in practice. For now, the swimming and diving team plans to start meets in January 2021.

Whether it’s next year or next fall, the swimming and diving team under Boyce will continue to strive towards greatness as they always have.