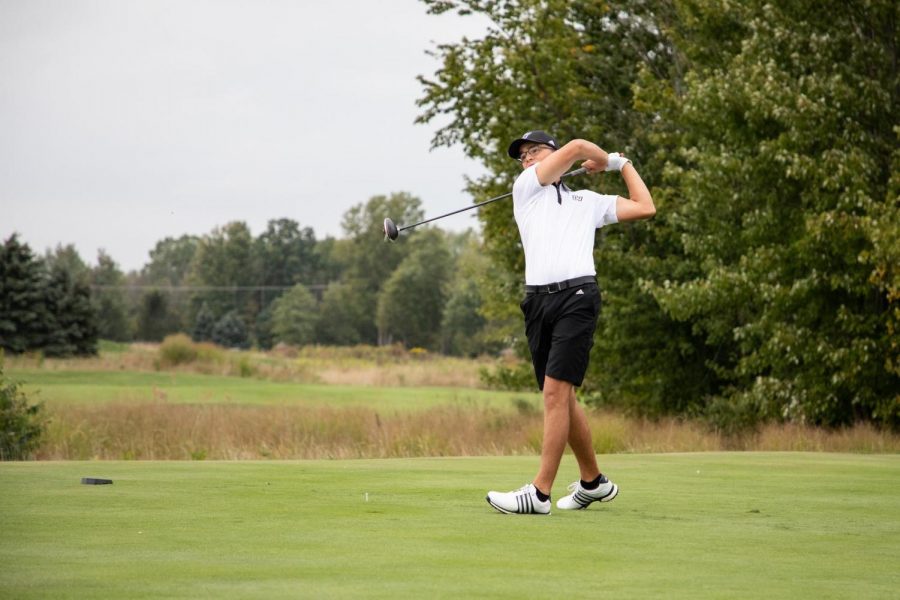 Last week, Monday Oct. 19, freshman Grand Valley State University golfer Charlie DeLong tied the course record at The Meadows. He had a score of 64, which was eight shots under par. He now shares the title with professional golfers and GVSU alumni Alex Scott and Justin Hueber.

“Every time you go out there you have it in the back of your mind that it’s possible to beat the course record,” DeLong said. “I got off to a really hot start and it started to enter my mind. It was cool knowing that I had tied such great players. Those two guys are professionals. It’s a great feeling to be in the same company as them.”

DeLong is technically a freshman but he is in his second year at GVSU. He is a “COVID-19 freshman,” meaning he’s taking an extra year of eligibility during the pandemic.

While he may be listed as a freshman, DeLong knows The Meadows course extremely well. DeLong plays the course almost every day. Now when he steps foot onto the greens, he’ll be thinking about beating his own record.

The day he tied the course record, the weather was in perfect condition. It was cold out, which let the ball fly right off his club, but it was also sunny with little clouds in the sky. There wasn’t as much wind as there normally is at The Meadows. All of these factors helped DeLong have his best outing yet on the course.

DeLong feels fortunate to be playing golf during the COVID-19 pandemic. Although the fall season at GVSU has been cancelled, DeLong has still been able to compete in other tournaments around the state and country. He’s still training and competing with the GVSU golf team in mind, even though he’s participating in non-GVSU events.

On Oct. 6, DeLong and fellow GVSU freshman Nick Krueger tied for third place at the Eagle Eye GCAA Amatuer tournament in Lansing. They both finished the three day event with a score of 213, which was three shots under par.

“The Eagle Eye event was great,” DeLong said. “It was about five minutes away from my home and it felt nice to be able to sleep in my own bed for the event. It was fun and it was a college-only event. It felt like a college tournament even though we don’t have a season this fall. It was nice to get back out there.”

DeLong’s time so far at GVSU has been filled with success. He was named the GLIAC Golf Freshman of the Year and earned a place on the All-GLIAC first team. He has earned two GLIAC Player of the Week honors. He has also won the Don Underwood Invitational and the Davenport Invite.

With all of that under his belt, DeLong couldn’t imagine himself anywhere else other than GVSU.

“I don’t think there’s a place in the country where I could be getting better at golf,” DeLong said. “It’s just the atmosphere and the people here. They’re hard to beat.”

The GVSU golf team plans to start their season in Feb. 2021. DeLong will continue to train in tournaments and of course at The Meadows. He will be going to Florida in December to compete in events down south.