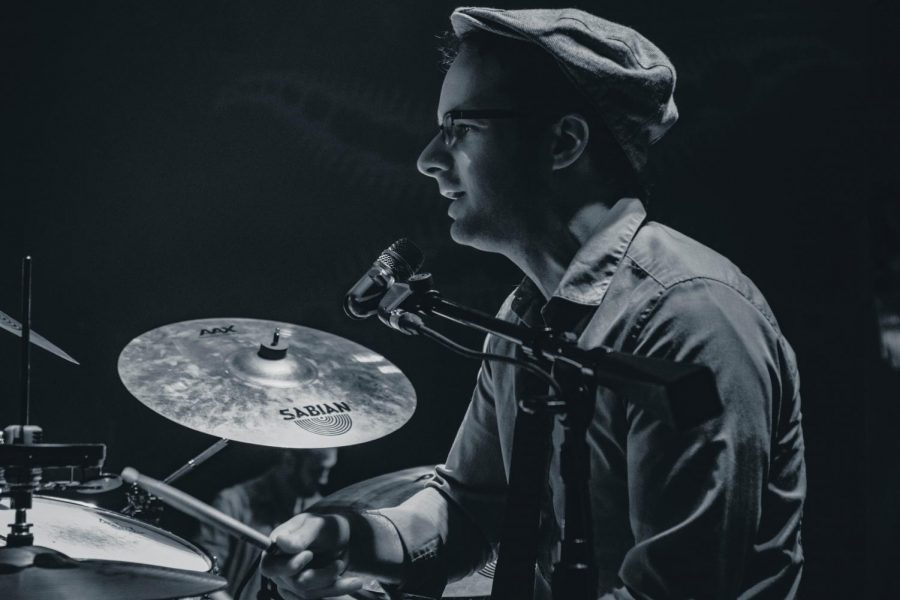 Upon moving back to Grand Rapids, a city that he missed while he was away, Luke Vande Heiden started his solo project, The Heiden Underground. Since its creation, Vande Heiden has been building his catalog with releases of two songs at a time as he awaits more opportunities to perform live.

Vande Heiden describes the Heiden Underground as eclectic rock, however, his songs pull from a range of genres like funk and folk. “Monday’s Heroes” and “Walk of Shame” are his most recent releases from September. His music has local roots, as Vande Heiden grew up in Grand Rapids and was inspired to write “Monday’s Heroes” after feeling nostalgic while driving around his old high school.

Drums were what sparked Vande Heiden’s initial interest in making music. After playing percussion in middle school, Vande Heiden played in a band in high school and fell in love with rock and roll.

“I consider myself first and foremost a drummer,” said Vande Heiden.

While he hires other musicians to play bass and guitar solos in his songs, all of the percussion and rhythm guitar in The Heiden Underground is played by Vande Heiden.

After graduating from Central Michigan University with a theater degree, Vande Heiden moved to Chicago and primarily worked backstage on theater productions. But he never stopped playing music. After a few years of playing on his own for fun, Vande Heiden decided to buy a $50 drumset off of Craigslist and reintroduce music as his main creative outlet.

He joined the band The Dirty Miners, playing shows at House of Blues Chicago and other local stages.

While he enjoyed the experience of being part of a band, he got to the point where he was writing songs that did not fit the band’s sound, and he was confident enough in his songwriting and singing where he felt like he could start a solo career. Along with his decision to pursue music independently, he was starting to grow tired of Chicago and he craved the scenery and slower-paced lifestyle of Grand Rapids.

“I missed the scenery,” Vande Heiden said. “I missed being so close to the beautiful lakeshores and beaches, but also the woods and hiking trails.”

Vande Heiden sings about his rediscovery of his love for West Michigan in the song he released in August 2019, “Yes I’ll Have Another.”

“Every time I came back for a visit it was getting a little bit more interesting and a little bit cooler and I was more and more impressed,” said Vande Heiden.

Even though he loved the area, Vande Heiden was at first hesitant about moving back to Grand Rapids because he did not think there would be enough resources for him to successfully start his solo career. That was until he found out about the city’s lively music scene and growing community of creatives.

“I was pleasantly surprised that there was even more than what I thought was here when I moved back,” said Vande Heiden.

The Heiden Underground takes an unconventional approach to release music and puts out two songs at a time instead of an entire album. This decision has practical and artistic motives behind it. On the practical side of it, studio time is expensive and Vande Heiden found that getting into the studio to release two songs at a time fit better into his budget than recording a full-length album.

However, there is more to this release schedule than the cost of recording. Vande Heiden has observed that since streaming is so popular, putting out a full album is not the only option a musician has. He hopes that by releasing his songs as more of a continuous list on his streaming profile, certain songs will not be as overlooked as they might be on an album.

COVID-19 has prevented him from performing any live shows since the launch of his solo career, but Vande Heiden plans to get into local venues as soon as they are safely open. Along with working on new music, one of Vande Heiden’s goals is to shoot a music video for some of his songs, especially for “Monday’s Heroes.”

His original vision for the music video was to play off of the nostalgic feel of the song and show him walking around his old high school, however, this is not possible in the time of social distancing.

Until then, he looked at the bright side and said, “It’s good to use this as downtime to create, and when we do come out of it, there will be that much more to perform.”