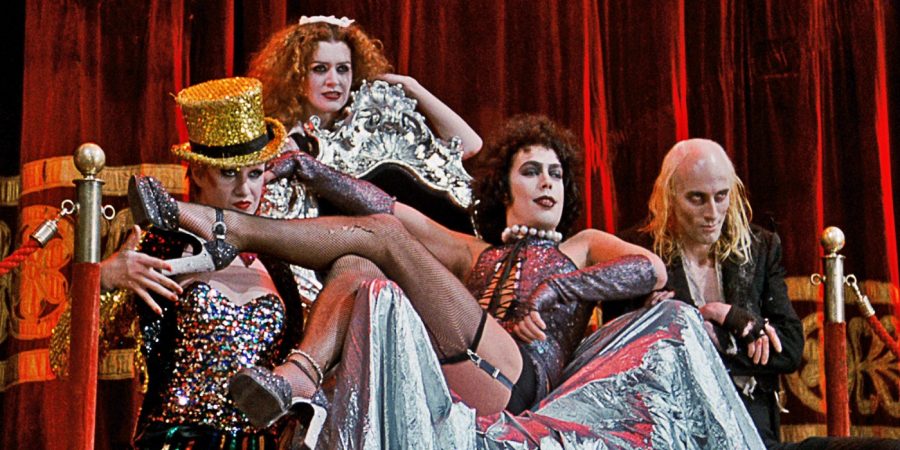 Tim Curry stared in the 1975 film, which has since become an enduring cult classic. (Courtesy / 20th Century Fox)

FRANK N’ FURTER: Well, really. That’s no way to behave on your first day out!

AUDIENCE: …Of the closet!

For four years in a row, Grand Valley State University’s Campus Activities Board has celebrated Halloween by hosting a communal watch of the cult classic movie musical The Rocky Horror Picture Show. This year’s showing, as has been the trend for 2020, was a little different than usual.

“Rocky Horror was originally supposed to be shown in the Grand River Room, which is where we’ve had it in previous years,” said Myca Frazier, CAB’s Director of Multicultural Affairs. “But the Grand River Room is billed as a classroom, which means there’s a limited number of people we can have in there under COVID restrictions. And we had 55 RSVPs right away. So it quickly became clear that it would have to be virtual.”

Frazier and Hannah Schafer, the CAB Director of Cinema, had already started working on the traditional Rocky Horror “goodie bags” when they decided to have the event online.

“In terms of getting the movie, it was easy, because I had already dealt with streaming all year,” said Schafer. “We’ve been able to get all of our bi-weekly movies through a streaming service allowing the students to watch them from the comfort of their home or dorm. But setting up Rocky Horror was a little more difficult, because typically students receive their interactive movie bags when they enter the room.”

The bags contain all the necessary props for the various traditions associated with communal viewings of the film — rice or confetti to be thrown during the wedding scenes, party hats or noise makers to be used during the birthday dinner, newspaper to be held over the head when its raining, and more.

“After Hannah and I put the bags together, we gave them to the LGBT Center so people could come there to pick up the bags and do the interactions at home,” Frazier said. “Then they had stuff like the confetti and the rice, as well as all the instructions for the call and response.”

As they have in previous years, the Campus Activities Board worked with Grand Valley’s Milton E. Ford LGBT Resource Center to make the event possible.

“It was great to partner with the LGBT Center,” Schafer said. “I am already hoping to plan another couple of events with them for the next semester. I made sure to have Marla collaborate with me on everything and get her input. CAB handled most of the logistics, graphics, streaming service, and interactive bags.”

During the event itself, the LGBT Center’s Associate Director Marla Wick introduced two speakers from Grand Valley’s Department of Women, Gender and Sexuality Studies to explain the longstanding connection between the movie and the LGBT community.

“It’s based on the 1973 stage musical The Rocky Horror Show,” said Professor Cáel Keegan. “Richard O’Brien is a gender nonconforming person who wrote this musical from a genderqueer perspective. It’s the longest running film release in film history — the Waverly Theatre is where the midnight billings of Rocky Horror started, and it was really an important part of gay liberation and sexual revolution in the 1970’s, even though critics panned it at the time.”

The enthusiasm and regard the movie is met with today is due to years of love and enthusiasm from its fanbase, many of whom are LGBT+ themselves.

“In the late 70’s and the 1980’s we see the rise of the moral majority and the conservative right, making a lot of claims about queer folk,” said Professor Jae Basiliere. “Queer folk get a lot of messaging about their monstrousness. Rocky Horror imagines a world where the freaks and monsters can celebrate — to say ‘okay, we’re nothing like you, and look how much fun we’re having at the monster party.’ It creates a subculture where the queers and misfits can come together and create a community over a really bad movie that’s so, so good.”

Keegan finds that in a way, the movie’s plot parallels the subculture that grew around it.

“The thing I really love about the film is that the two main characters start out in this really normative, boring life before they get lost,” Keegan said. “Sometimes getting lost is the best thing you can do, because they find something that dramatically expands their world. People in real life go to midnight screenings and get patched into this culture, and that’s exactly what happens to Brad and Janet in the movie.”

The Rocky Horror Picture Show follows the engaged couple Brad and Janet as they accidentally stumble across the Annual Transylvanian Convention of mad scientists, led by Dr. Frank ‘N Furter (the “Sweet Transvestite” from “Transexual Transylvania”) and attended by his crowd of “unconventional conventionists.” Their campy garb, expressions and dialogue have fueled decades of call-and-response scripts from enthusiastic audiences.

“There’s a whole subculture that exists around these showings,” said Basiliere. “They have their own norms, language, behaviors. You can attend a showing of Rocky in any city in the country and gain insider status by knowing when to throw the rice, or what to yell when Riff Raff opens the door for the first time.”

Though after the introduction Zoom participants went their separate ways to stream the movie through CAB’s link, the classic audience participation and community togetherness associated with Rocky Horror was still captured through laughs and conversation before the showing started. And for those who missed the in-person aspects, the show will go on — stage shows and midnight features of The Rocky Horror Picture Show remain popular the world over. There’s always next year!