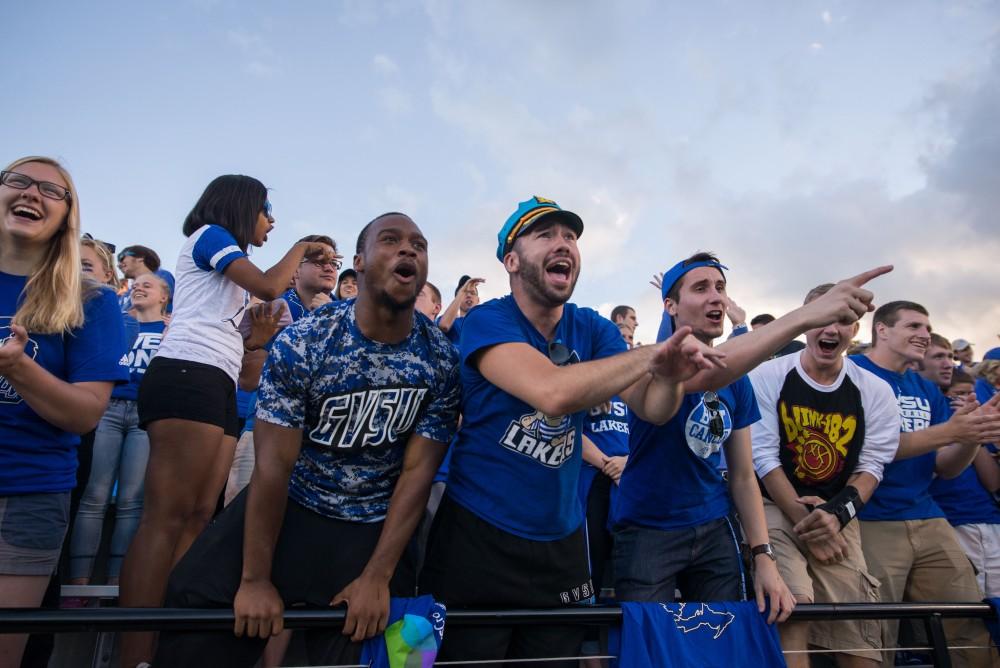 There’s a case to be made that this has been the most stressful week for Grand Valley State University students over this whole semester, for a variety of reasons.

With midterms wrapping up over the last few weeks, many students are panicking because there are only so many weeks to improve their grades before the holiday season is upon us.

That stress towards the semester has grown exponentially during this first week of November, as college students all over the country find themselves constantly checking poll results while worrying about what those results could mean for the future of our country.

On top of all that, the pandemic is still in full swing, as numbers are spiking every day in Michigan. On Wednesday alone, more than 4,000 Michiganders tested positive for COVID-19.

These factors all culminating during the month of November can be a lot for students to handle, and being able to attend a GVSU sporting event right now could give students the emotional and mental escape they so desperately need right now. Sadly, because of the pandemic, sporting events at GVSU, both at the varsity and club levels, won’t be happening until at least the first of the year, barring a vaccine miraculously becoming readily available in the next few weeks.

As someone who has been covering GVSU sports for the last three years, I know better than most that this should be one of the most exciting times in the sports calendar for GVSU athletics.

Pre-pandemic, the start of November marked what is quite possibly the busiest time of year for the Lanthorn sports section.

At this time last year, the GVSU soccer team was playing their best brand of soccer and were well on their way to claiming their sixth national championship in program history.

While the GVSU football team didn’t make the postseason last season, this time of year usually consists of scouting playoff opponents as the Laker football team prepares to make a deep postseason run.

The men’s and women’s cross country teams were also dominating at this time last year, placing in first at the NCAA regional championship with many runners posting impressive performances.

Fall sports ramping up for postseason play often converge with the start of the season for winter sports teams at GVSU, who at this time last year were also getting ready for what would end up being successful seasons.

That women’s basketball team was able to run it back for what was arguably a more successful 2019-20 campaign, where the Lakers only lost three times and were nationally ranked all season of the season before having their NCAA tournament cut short due to COVID-19.

This would normally be one of the most exciting times of year to be following the Lakers, where we as fans would get a chance to sit back and watch the DII powerhouse that is GVSU athletics continue to dominate and fill out the trophy cases. Those sports all came to a screeching halt thanks to COVID-19, which has made many parts of GVSU’s campus look a lot different.

Previous editors of the Lanthorn have written lengthy columns questioning the school spirit of GVSU students, calling out Laker fans for not showing up to watch these commanding teams do what they do best in Allendale.

When this pandemic is over — and it will eventually be over — come out and support these GVSU student athletes, who have gone months without playing the sports that have given them an escape from the evils around them.

There was a quote from Earl Warren, the former chief justice of the U.S. Supreme Court, which used to sit at the sports desk in the Lanthorn office that feels more prolific now than ever.

Quotes like that perfectly capture why we love sports: no matter how heinous, ominous and depressing the world can be, you can always turn your brain off for a few hours and watch talented human beings do the unfathomable on a regular basis.

With the GLIAC decision to put all varsity sports on hold until 2021, there’s a good chance I’ve witnessed my last GVSU sporting event as a student, being that I graduate in December.

I’ve covered hundreds of games for this newspaper, and in these stressful times, I would give anything to return the press box to watch Ava Cook find the back of the net, see Tyler Bradfield lead the Laker defense or watch Jake Van Tubbergen slam it home with the band serenading his post-dunk celebration.

By the time GVSU sports are back, I’ll be trying to navigate the “real world,” while talented sports writers in Zack Goodrow, Holly Bihlman and Josh Carlson will be following these dominant teams.

They’ll be covering the games, masks and all, and I’ll be watching from the sidelines in what is hopefully a swift return to normalcy.

I just hope the student population at GVSU is as excited as I am to see the sports that give us a healthy escape come back to campus safely. Once fans are allowed to return to these games physically, those student sections better be as packed as ever.

That is what these diligent, talented GVSU student athletes deserve.