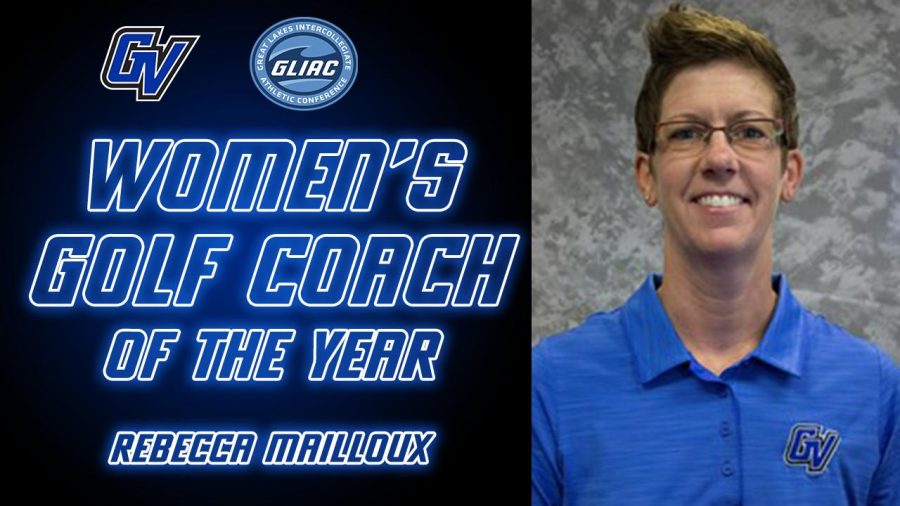 This is Rebecca Mailloux’s thirteenth year as the head coach of the women’s golf team at Grand Valley State University, but her relationship with the sport started even further back.

Before she tried her hand at coaching long ago, Mailloux was a part of the professional golf world. Her golfing career began after high school in her home state of Rhode Island and took her to several different states. She won Rhode Island’s Female Athlete of the Year award in 2002 right after college.

Starting at a relatively older age than most other professional golfers, Mailloux was introduced to golf when she was ten years old, eventually playing through high school along with several other sports.

“I was involved in quite a bit of sports growing up,” Mailloux said. “I was a basketball player, softball player and golfer. I did all three of those throughout high school. Then in my junior and senior year, I decided I was going to pursue college golf.”

Mailloux began her colligate golf career at Longwood College in Virginia and played there for two years. She even won a medalist honors at the Longwood Invitational her freshman year. However, once she decided Longwood wasn’t going to push her hard enough to become as successful as she had wanted, she made the transfer to the University of Southern Florida. Moving from a D2 to D1 school gave her the opportunity to compete at higher levels and work towards the professional golf world.

While in Florida, Mailloux played number three on the team and made it to the NCAA Tournament her junior and senior year. She also helped her team win the Conference USA Championship twice. Out of all of her success at school, her greatest feat was actually the Massachusetts Women’s Open. This event made her realize she was capable of pursuing professional golf seriously.

“It was when I was in college, but it was actually a summer tournament that I was playing back home in Rhode Island,” Mailloux said. “It was the Massachusetts Women’s Open. The year before I had finished runner up in the event, and then in 2003 I won it all. There were some really good female golfers there, especially professional golfers, and I actually won the whole thing. For me, that was kind of what gave me that confidence to say, ‘You know what, maybe I can make it at the professional ranks.’”

With this jump into the professional golf world, Mailloux began to take on golfing as a full-time job after college, staying in Florida for five years. Her first coaching position fell into her lap within these five years at St. Leo University, and she figured she would try it out alongside her own golfing.

As her first coaching job, Mailloux felt like it was something she could really be good at. However, multitasking wasn’t doing her golfing career or St. Leo’s team any favors. Neither aspect was as good as it could have been.

“I was basically giving half my attention to both,” Mailloux said. “It was in those two years when I was playing professionally that I stared paying attention more to what my playing opponents were doing. I was becoming more interested in helping their games than I was my own. I feel like I was getting a different satisfaction in helping others.”

It was this realization that led her to take on coaching full-time, and she was able to develop St. Leo’s golf team over the first five years of their existence. The beginning of her career was littered with success and determination.

This didn’t go unnoticed. Mailloux received a call from the head coach of women’s golf at GVSU, asking her to fill the position.  After 13 years with consistent trips to the NCAA Championships and numerous Coach of the Year awards, it’s safe to say Mailloux made the right decision.

The title of a head coach at GVSU is so much more than what is in the job description. Over the years, Mailloux has encountered some of the hardest and happiest times in her life while working with her team.

“We joke all the time, but coaches are so much more than just X’s and O’s,” Mailloux said. “We’re their moms at times, academic advisors, their counselors and their friends most of all. It carries a lot, but I think that’s what I love about it. It’s never boring.”

One of her favorite memories as the head coach for GVSU was the 2016 D2 National Championship in Denver, Colorado. The Lakers made history in the golf program as they made a comeback in the third and final round to finish fourth overall.

“It was in Denver at the National Championship, and it was the third round,” Mailloux said. “We hadn’t played well the first two days and we were sitting in ninth place. The girls just came out on fire in the third round and shot a school record that still holds, 284. It was incredible and we moved from ninth all the way up to fourth place. That was probably, competitively, my most memorable experience.”

Mailloux was rewarded with her sixth Coach of the Year award to top off the unbeatable season. Even with all the victories and awards, Mailloux treasures the athletes she has had the chance to work with and the lessons learned along the way the most. With the opportunity to coach students of all different backgrounds and styles, she has made the most memories off the green with her team, as every great coach does.

Mailloux has been committed to helping the women’s golf team at GVSU for almost two decades now. As a coach with as much professional experience and dedication to putting time into her athletes, it’s no surprise how much history she has made and the amount of success she has found with the Lakers in her time spent here.