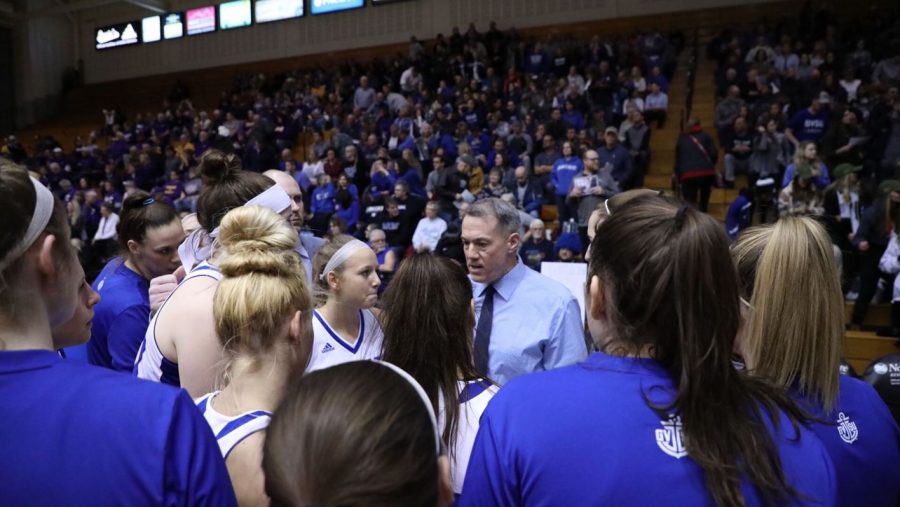 As the start of their season looms, head coach Mike Williams and his team have been hard at work to prepare. His team is already a very young one with their top three scoring players from last year graduating in Cassidy Boensch, Maddie Dailey and Jenn DeBoer. That won’t change next year, as the seven new recruits joining the team will make it one of the youngest Williams has ever coached.

The team has spent the past several weeks preparing for their regular season. Whether it was going to commence or not with the COVID-19 pandemic still surging, Williams and his team have been working hard to develop his young team.

“There’s been a lot more teaching in our practices and more confidence building,” Williams said. “We’re trying to develop our players. As a staff we’ve been trying to develop leaders. Some girls have really stepped forward and it’s a positive thing.”

With restrictions on practice size and even practices being cancelled, the team has had to make the most out of their time on the court together. They have talent but there isn’t much experience on the roster. That will change in the coming years, as the 2021 recruitment class looks to be the future of the team.

“Some of the guards can play different positions because of their size,” Williams said. “They’re not really true guards, they have flexibility. We’ll find a way to make it work.”

The team also recruited two forwards with Nicole Kamin and Macy Bisballe. They also added size to the with 6’3 center Megan Crow rounding out the recruitment class.

“Obviously it’s a big class,” Williams said. “We brought in size and athleticism. We also brought in good skill players. They’ve all had success playing in high school and in AAU clubs, which is very important to us.”

With such a big recruiting class, Williams and his staff will have to redshirt some of the players. Overall, Williams is happy with the 2021 recruiting class and was glad the team could secure so many good players. Most importantly for him, every girl in the class is perfectly suited for GVSU and the basketball program.

“They’re all a really good fit for GVSU,” Williams said. “They’re all quality kids and good basketball players, but they fit in with the school. That’s what was most important for our club, that they fit into what we’re trying to do and accomplish.”

In the coming week, Williams will prepare his team for their upcoming season. The season might be filled with cancelled games, setbacks, and unforeseen circumstances hindering the team. Williams has been dealing with that and adjusting all year and he’s gotten his players ready to adapt. He, along with the rest of his staff, will have to wait another year to see this recruitment class in action.