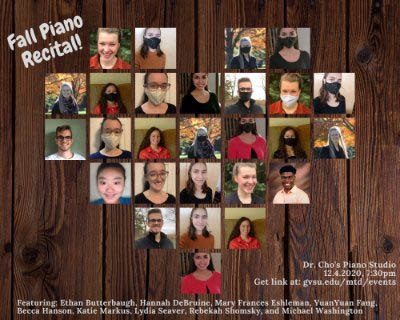 On Friday, Dec. 4 beginning at 7:30 p.m. assistant professor of piano and artist performer Sookkyung Cho’s Applied Piano Class held a virtual concert. The piano studio performed nine songs throughout the course of the evening in celebration of the end of Grand Valley State University’s fall 2020 semester.

Nine students in total participated in the streamed concert, eight of them performing solo piano pieces and one performing alongside a cellist.

The first section of the concert began with fourth-year student Rebekah Shomsky performing Preludes, Op. 34 by Dimitri Shostakovich. Her performance was followed by Mary Frances Eshleman, a third-year student who alongside cellist Christina Leigh Stephenson, played Cello Sonata No. 3 in A major, Op. 69 by Ludwig van Beethoven.

Given the difficulties brought about this semester with virtual learning, Cho said she is proud of how much her students were able to accomplish through it all.

“My students worked so hard under these very difficult circumstances this semester,” Cho said. “I am really proud that they have maintained the amount of focus that’s needed to prepare for fine performances.”

The second portion of the concert began with Becca Hanson, a second-year student, who played Piano Concerto no. 20 in D minor, K. 466 by Wolfgang Amadeus Mozart.

Shomsky and Seaver closed out the night by playing Sonata no. 23 in F minor (“Appassionata”) by Ludwig van Beethoven and Polonaise in C-sharp minor, Op. 26 No. 1 by Frédéric Chopin, respectively.

Cho holds a studio recital every semester and saw to it that one would take place this semester, too. But, with a few alterations of course. Instead of a live performance in front of a large audience, this semester each performance was pre-recorded and streamed on YouTube.

“Nothing can replace the live performance experience,” Cho said. “It won’t be the same as usual, but hopefully, we can share the recital with family members and friends that are far away, too.”

Cho said she was proud to see her students grow throughout the semester, and wants them to know how appreciated they are.

“I would like to thank my students for their perseverance, passion, and commitment,” Cho said. “It’s such a joy to work with them.”

Although the Piano Studio Recital marked the end of an unusually challenging semester for students and musicians alike, Cho’s Applied Piano students showed just how rewarding persevering through it all and working hard can be.

“Nothing stops us from making music,” said Cho.