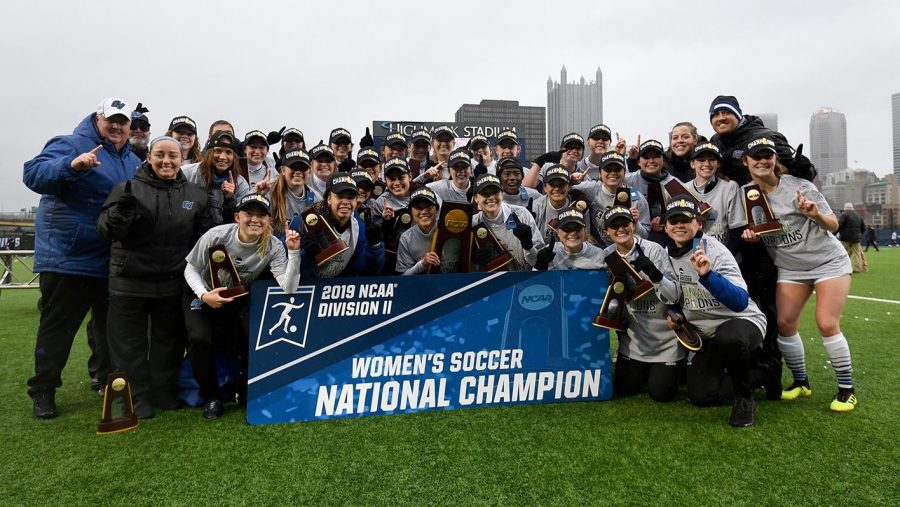 After a long awaited process full of uncertainty, Coach Jeff Hosler of the Grand Valley State University women’s soccer team received good news that they will hit the pitch and play a conference only schedule beginning in March. Although it will be in the spring instead of the fall, the opportunity to participate in full speed competition has been something they have been hoping for. As it stands now, there will not be a playoff on a national level, and the season will only feature a conference tournament.

“It’s been nice to focus on ourselves and work through individual growth through this fall semester,” Hosler said. “Our kids certainly have an expectation of continuing to get prepared as they look to return in January. We have two full months back on campus before we kick off our first match.”

The Lakers have been using this extended pre-season to their advantage, and although they haven’t been able to play full-speed competition, the team will be prepared.

“We have two months to make sure we are physically fit,” Hosler said. “We’ll work on understanding our positional roles, how we are looking to tweak some of our system of play, and roles within our team then go out and play. It’s exciting to me because it’s how it should be set up, to have time to prepare and go play.”

The time has done wonders for them, specifically for individual members who have recently joined the team.

“More than anything, it’s been beneficial for our freshman,” Hosler said. “They haven’t had to deal with that competitive anxiety of, ‘am I good enough to play’, ‘am I going to get playing time’ and the speed of play against opponents compared to our training. All of those different things were taken out of the equation. I think our freshmen will see a lot quicker growth because they can get fully acclimated to what we are doing.”

With an incredibly talented and committed group of players, the freshman class competed with and against All-American caliber players, and benefits from that will be shown for the years to come.

If all goes well, the Lakers will be swinging right back into action on the pitch in a short period, with only a summers worth of an off-season. Hopefully they will be back to competing during their typical regular season.

“I think they’re going to feel like they are playing a lot of games,” Hosler said. “It will probably take them back to their club days where they played multiple games every week and played showcases with three games in a weekend. If all goes well in the spring and we play through a GLIAC championship, you’re through the first weekend of May already. I think our kids are excited that there is a possibility that if there’s a full spring season and a full fall season that they could play as many as 40 matches over a seven month span. There is a lot to be excited about, and I think that transition will be easier than any other summer we have had before.”

The seniors will now be able to compete after a lot of time spent not knowing if their possible final season in Laker uniform would be lost. Hosler says that they are ready to go and are prepared to return in uniform once again. With the decision in the summer to cancel the season, they had time to deal with the emotion that came from the unknown. Hosler stated that they came out in a much better place emotionally with that time.

“We did a lot of talk about continuing to control the controllable,” Hosler said. “Really having the focus just be on how you are going to be your best today and be committed in that way. It’s too easy to have your mind go adrift if you don’t focus on those things.”

Hosler and his staff have been doing the same, and although as coaches they have to plan for the bigger picture, making sure they are present and prepared is something the coaches are doing to reinforce the behavior they are asking for from the players.

Since the fall season was canceled, the NCAA has also granted a blanket waiver for the players that will now give them an extra year of eligibility. This means there is a possibility that Lakers fans will see the senior members back for another season. The seniors decided they did not want to make it a big deal and look ahead to focus on the spring season.

“I think that shows a lot about them,” Hosler said. “The class and professionalism of that group and the humility they possess; they don’t want it to be a big deal. They want to continue to preach to the other players. The example of this season is the one that is important.”