GV community gathers to honor the life of Taylor DeRosa 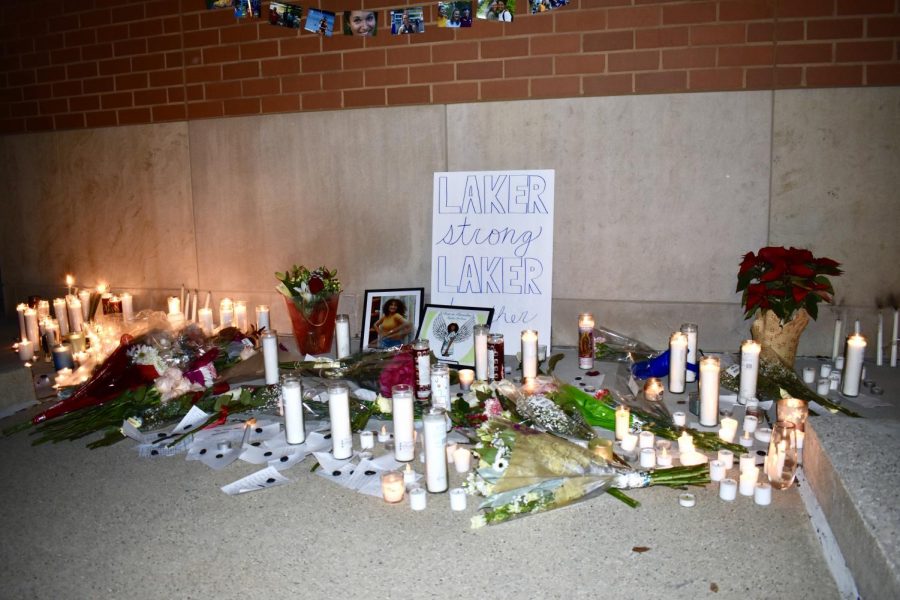 As freezing winds blew through Allendale’s Grand Valley State University’s campus on Wednesday evening, students, parents and alumni gathered at the Cook Carillion Tower to remember the life of late first-year student Taylor DeRosa, whose body was discovered on campus on the morning of Saturday, Dec. 12.

Taylor DeRosa was 18 years old and in her freshman year at GVSU,  majoring in international business with a minor in French. A graduate of Royal Oak High School, DeRosa was involved regularly in extra curriculars; she played lacrosse throughout high school, was involved in Interact Club, Spirit Club and her school’s Diploma Program.

DeRosa was a loving daughter, granddaughter, cousin, niece and friend. According to her memorial and funeral expense GoFundMe page, DeRosa was close with her mother Carolyn, or Cara, who as single mother raised her only daughter, Taylor, and worked seven days a week at two different jobs to provide her the perfect life she felt her daughter deserved. They were regularly in contact during DeRosa’s time away at university, and FaceTimed or spoke on the phone almost every day. The memorial bio mentioned that Carolyn was very involved in her daughter’s life, and many of Taylor’s friends considered her as a second mother.

Many in attendance at the vigil laid candles, flowers, notes of support and remembrance for DeRosa’s family, and other items at the memorial which sat at the base of the clock tower. GVSU President Philomena Mantella was in attendance as well, with candle in hand.

“One thing that made Taylor happiest was making other people happy, and she would be so happy to see all of us coming together to remember her,” a close friend of DeRosa’s said at the vigil. “She wouldn’t want us to be sad, she would want us be happy, have a party, love each other, give each other hugs.”

DeRosa was involved with activism and was a regular advocate for gun control, Black Lives Matter, women’s rights and a host of other organizations and movements that supported what she believed in: human equality, fairness and truth. To those who knew her, DeRosa was known for her illuminating smile, her warmth, friendliness and humor that brought great joy to any room she was in.

Mikaela Brzuchowski, a GVSU senior who helped to organize the vigil for DeRosa on Facebook, said that she wanted to help make sure other students were aware of the opportunity to honor DeRosa’s life, especially since her death rocked the entire university in a way many hadn’t experienced before.

“When I heard about her passing, I was honestly in disbelief because it hurt our community and we are all mourning right now, and I know a lot of my friends and peers feel the same way,” Brzuchowski said. “Taylor, whether you knew her or not, made an impact on all of us, and honoring her helps us remember that we are all Laker strong and that we are a Laker family together, and I am so grateful to everyone who came out and paid their respects and honored her and her family because that shows we are all united with love for them right now.”

At GVSU, everyone in the community is mourning the loss of a bright young student with potential that was evident in her passions, and will continue to honor her life as one Laker family.

Friends of the DeRosa family organized a GoFundMe page for her memorial and funeral expenses. With a goal of $50,000, the fund is now at over $62,000 with over 1,800 donations and 7,000 shares within one day of the page’s creation.

As the vigil carried on throughout the night, the memorial created at the base of the clock tower glowed brighter and brighter as hundreds of candles were laid among the memories of the late student. The monument to her life sat beneath a quote from Paul Hindemith engraved into the side of the clock tower: “People who make music together cannot be enemies, at least while the music lasts.”

The quote was a glaringly hopeful statement in the midst of such sorrow. Taylor DeRosa would have turned 19 years old on Jan. 13, and although the “music” that she made was cut short, it is evident in the words of those who knew her, and with the presence of those who mourned her, that her soul and voice touched more lives than she will know.

Wednesday night’s vigil reminded the GVSU community and beyond that Taylor’s light will never truly go out, as it will be carried on by those in her life who loved and celebrated her, and those at her university who will continue honor her dreams for the future that were taken far too soon.