Swimming and diving teams back to competition after early-season hurdles 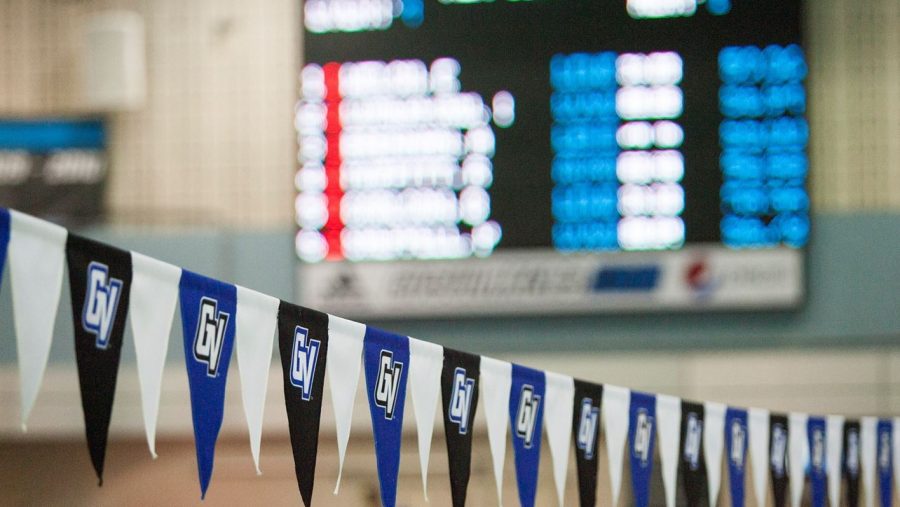 The 2019-20 swimming and diving season at Grand Valley State University was filled with familiar sights and heartbreak. After finishing the season with a 20-4 record, the GVSU men’s team went on to finish first at the GLIAC Conference Championship and the women’s team finished third. The season was cut short midway through the Division II National Championship meet in Geneva, Ohio as lockdowns started in the country due to COVID-19.

It’s been a rough road back to getting into the pool and competing for GVSU, but the 2021 season seems to be back on track. GVSU’s first two meets were canceled earlier this month. Their first meet against Davenport and Indianapolis was postponed due to testing issues. However, it has been rescheduled for Feb. 6 against Davenport only.

This weekend, Eastern Michigan was unable to compete due to positive test cases on the team. Instead of a three way meet, GVSU invited Finlay to come to Allendale for their first meet in almost a year. This season’s schedule will no doubt have to be shuffled around due to COVID-19, but coach Andy Boyce and his swimmers know that they will remain focused.

“We told our kids to treat every meeting like it’s the last one of the year,” Boyce said. “They need to be aggressive, go after it and not hold anything back. Hopefully we can get all of our meets in but we don’t know. They could be canceled because of COVID cases on our team, on another team, or the Governor implementing new protocols. We just don’t know.”

Boyce and his fellow GLIAC coaches have been hard at work scheduling their teams’ seasons. GLIAC teams need to have five meets, including the conference championship, in order to qualify students for the NCAA tournament. GVSU has six scheduled matches as of right now. These meets won’t count towards seeding, but they should be good to get in practice before the conference and national meets.

This year, a limited number of teams will be qualified for Nationals. Boyce and his players hope that GVSU swimmers can have an even stronger presence at the meet with more swimmers qualifying.

Before their first meet even started, GVSU had already started the season strong by bringing all their coaches and players back from the holiday break COVID-free. Since coming back on Dec. 28 to take COVID-19 tests, the team has been practicing and preparing to get their season going.

“We’ve been saying all year that you have to be smart and be cautious when it comes to COVID,” Boyce said. “The swimmers just go to class, go to practice, and go home. It’s tough for them and things can happen where someone is exposed or catches COVID-19. We just have to be ready for anything.”

For every athletic team at GVSU, this season will be a foreign experience. Without a crowd in the stands, players will have to adjust with no fans cheering and will have to look inward to find a spark to keep playing hard.

While the swimming and diving team at GVSU will have to modify their thinking during competition without a crowd, they may not have to adapt very much. Every GVSU swim meet is filled with Lakers swimmers and divers cheering on their teammates, yelling encouragement, and are sometimes even louder than the audience in the stands.

“They make a lot of noise, that’s for sure,” Boyce said. “I just tell them that they need to make sure they have their mask on when they’re cheering that loud. It’s just going to be a little quieter. They have to get it in their heads that they have to be ready to go. They’ll have to find it in themselves to stay motivated with the sound of fans and their teammates.”

It’s obvious that the GVSU swimming and diving team is filled with tremendous athletes and experienced coaches. They have dominated the GLIAC since Boyce’s tenure began. But it isn’t just their speed and technique in the pool that makes them so successful; it’s also how close-knit the team is and how much they care for one another.

In a year where every aspect of the team will be tested as COVID cases continue to ravage the country, perhaps GVSU’s biggest strength to lead them over their competition is their chemistry.

“We view ourselves as a family away from home,” Boyce said. “We’re going to push ourselves in the pool and that’s been the hardest thing about this year. We haven’t been able to do as many team events or get the freshman acclimated as well with their teammates. It’s been trying but we’ve had team-building activities that have helped. We haven’t been able to do it how we’d like to or normally do it. But this is the strongest part of our team and we’re getting the chemistry back.”

It’s been a difficult past eight months for the swimming and diving team at GVSU. As the new year starts, however, things are looking promising. The team is COVID-free and have had some great practices. The swimmers and divers have been looking forward to competing again, and have shown it by inching toward new pool records in practice. The freshman and sophomore classes have looked promising for the team, as well as some new transfer students. It seems like GVSU is in for another highly successful season.

“We’ve shown a tremendous amount of resilience as the year has gone on,” Boyce said. “We’ve had our ups and downs for sure, but we’ve been preaching consistency in practice. We’ve had a good amount of practices since September. We’ve had to jump through a lot of hoops in order to race again. This first meet will be exciting and it feels great to be back. We’re hungry to compete.”

Both the men’s and the women’s team won their first meet against Findlay on Jan. 16. The men finished the meet with a score of 193-91 and the women at 209-77. The Lakers have five more meets before they compete at the GLIAC Conference meet on Feb. 6. For individual statistics from the Findlay meet, check out the Quick Hits column.