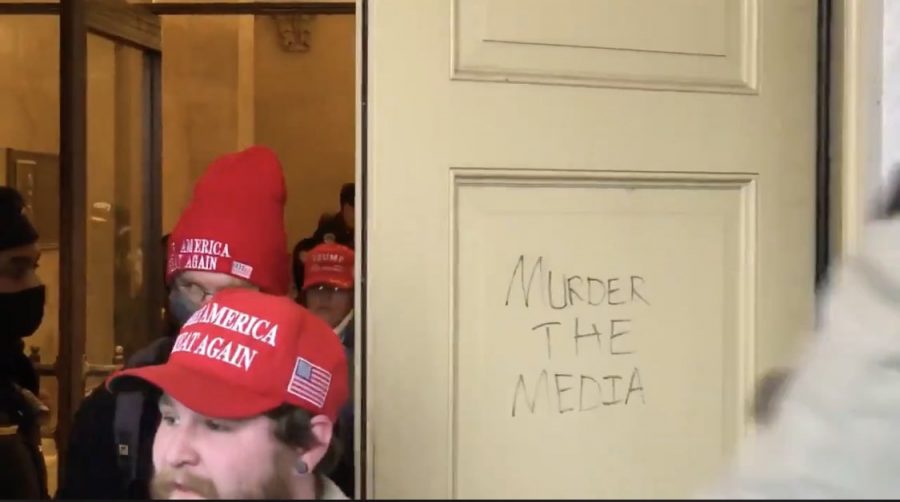 Young journalists are living through a professional oxymoron. As we look at the news cycle, it’s simultaneously the best and the worst time to pursue journalism.

On one hand, the level of misinformation and demands for justice are inherently dependent on truth, and journalists are keepers of public trust and knowledge. Between election challenges, international threats and the pandemic, there are few times in our history where we’ve needed journalists more.

But on the other, student journalists face a crumbling job market complete with dying local newspapers and crippling wages. Even more than that, there’s a growing demonization of reporters that not only affects those in the field, but those aspiring to one day work as a reporter.

America got a brutal glimpse of it on Jan. 6.

As the insurrectionists breached the Capitol during the congressional counting of the electoral votes, the mob’s trail of destruction hit some parties harder than others. Politicians both hid for their safety and incited the violence. Police officers both dropped the ball on preparation and management, while some went beyond the call of duty to protect those they serve.

I was sitting on the couch of my childhood home watching this unfold. There was a slow churning of disgust in my stomach but I couldn’t turn away from the TV. My dad likened it to watching the September 11th terrorist attacks. This was as close as we’ve gotten to that tragedy since, he said.

Aside from the national shame I felt many Americans were going through watching these events, I was hung up on one message.

It was carved into one of the doors of the Capitol, a photo bookending it between two insurrectionists— one screaming and another eying the photographer. It was almost a poetic scene as both the message is literally tainting a building that houses our democracy, as well as metaphorically embodying the growing dissent winding through the country against journalists.

There was a time when I was first doing journalism that this was the least of my concerns. Perhaps someone missing my call or a hastily-sent email were worrisome at the time, but now, as a college journalist working in the field and staring graduation in the face, things change.

I’m worried that my work will earn me death threats where I deserve applause. I never grew up needing validation, but instead, I’m now afraid for those around me, and even for myself in the field on occasion when insurrectionists refer to my peers as “soft targets.”

When did we go from rewarding good journalism with praise and progress to attacks? I think we all know the answer, but are we working to change it before it rattles young journalists too much?

So when we sit and watch idly as insurrectionists charge media areas, beating reporters and destroying equipment, something else lies in the ruin: our valuing of truth.

In allowing this demonization of media, we’re subscribing to the notion that information can be partisan, hand-picked or even falsified. It’s opting out of hard conversations and rather pinning the blame on congressional figureheads or faceless plagues.

As you watched insurrectionists storm the Capitol in horror, those images came through the lens of a reporter wading through a sea of people who would rather they be dead than doing their job. But despite that, they stayed so you could be informed at home in your pajamas.

I’d be lying to you if I said I wasn’t afraid, disheartened and anxious. I’d be lying if I said it didn’t worry my family, my girlfriend, my friends.

I’m still going to be there, though — interviewing those that need to be heard, sharing what needs to be seen and writing the truth, no matter how hard it is to swallow.

But what are you going to do? Stand aside as I’m harassed, threatened and beaten or stand by me as we uphold truth in this country?