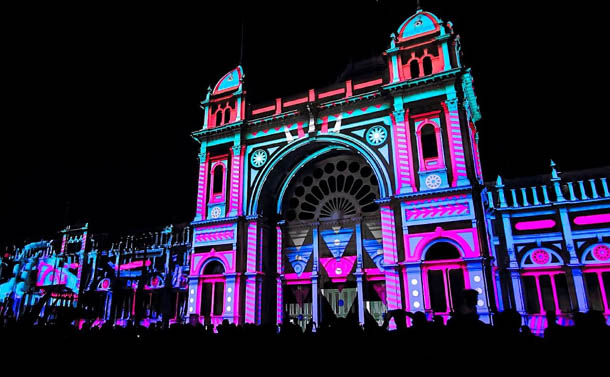 Courtesy to World of Winter GR

Downtown Grand Rapids Inc., the City of Grand Rapids and numerous community partners have come together to hold the city’s fourth annual World of Winter Festival.

With aspirations to make Grand Rapids a more active winter city and provide its members with some free, socially distanced outdoor fun, the festival has returned this year. Taking place from Jan. 15 to Feb. 28, Grand Rapids will be chock full of things to do and see.

Samantha Suarez, Communications Specialist for Downtown Grand Rapids Inc., said the community can expect the same fun from the festival, but with a different focus this time around.

“This year we’re focusing on ice sculptures, artwork and outdoor performances because we can’t do indoor events with crowds of people like we have before,” Suarez said. “Instead, we doubled our investment on outdoor art and ice sculptures. There will be way more of that than in past years.”

Suarez said the artwork installed due to this new investment is actually what she is most looking forward to.

One of the biggest art pieces featured downtown are large-scale installations at Ah-Nab-Awen Park by Hybycozo, the Hyperspace Bypass Construction Zone. These sculptures investigate geometric exploration through light, shadow and perception and cast shadows on the ground all around them.

Among the seven Hybycozo installations downtown, one will permanently reside in Grand Rapids. This piece was specifically designed for the city in collaboration with Alan Compo, a Grand Rapids artist from the Grand River Bands of Ottawa Indians.

Yelena Filipchuk, co-founder of Hybycozo, said the piece is meant to tell the origin story of the Ottowa Indians. She said she hopes that the collection of installations inspire hope in those that see them.

“I love that Grand Rapids has such a dedication to the arts and bringing in arts for the enjoyment of the community,” Filipchuk said. “Our collaboration with Alan was so significant. We use patterns from all over the world, so it was a real privilege to work with a native artist and through that be able to tell the story of a native tribe.”

Filipchuk said she is most looking forward to seeing the collaborative dance performances and Tribal Stories events that will be taking place in front of and around the sculptures.

Lynne Tepper, the Executive and Artistic Director of Circle Theatre, said there will be individual and duo performances as well as a larger Valentine’s themed concert that will include four singers and four musicians.

Tepper said the theatre is excited to be involved in the festival and the new opportunities it brings as they have only previously done performances in the summer.

“Being involved in such a wonderful event and having the beautiful installations as a backdrop for the concerts is very exciting,” Tepper said. “It also allows us to try something different and to potentially reach a new audience.”

The pop-up performers will not be the only ones singing throughout the festival.

This year, The Singing Tree will be featured at Canal Park. This is a lighting experience that visitors can interact with in real-time by singing, clapping, or yelling. A performance by Grayson Nye will also take place near this tree on a piano made of ice.

Another interactive art installation, known as Impulse on Monroe, will consist of 15 seesaws that light up and create sound when you use them.

Other events taking place during the festival will be numerous walking tours, Winter’s Drag shows, a World of Winter scavenger hunt and outdoor ice games such as foosball, cornhole, chess, checkers and plinko.

A complete schedule of all of the different festivities can be found online at www.worldofwintergr.com.