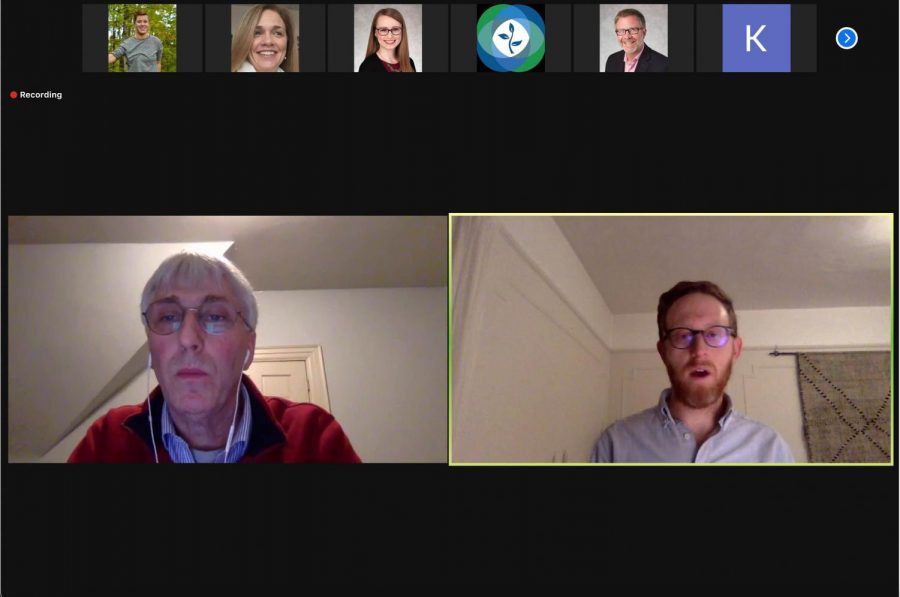 On Wednesday, Feb. 3, the Grand Valley State University Brooks College of Interdisciplinary Studies Civil Discourse program held its first night of a two-part virtual symposium that featured prominent writer and journalist Andrew Marantz. Led by Jeff Kelly Lowenstein, the current Padnos Sarosik endowed professor of civil discourse, the virtual event offered students, staff, faculty and community members an opportunity to gather at one event for a robust discussion of the current civil discourse topic. The symposium is the seventh installment of the civil discourse program discussion initiative, the first symposium having been held in 2014.

Marantz, a staff writer for The New Yorker, has contributed to the well-known magazine since 2011. He has written extensively for the magazine on technology, social media, the alt-right and the press, as well as about comedy and pop culture. Marantz holds a bachelor’s degree in religion and religious studies from Brown University and a master’s degree in journalism from New York University.

During the evening, Marantz led an open conversation about the interaction of political extremists and mainstream conversation, and discussed his newly published book, “Anti-social: Online Extremists, Techno-Utopians, and the Hijacking of the American Conversation.” Kelly Lowenstein said that Marantz has unique perspectives on the state of politics and media, and gave important insight into the tension of sharing accurate information in the media and online today.

“Andrew’s work from the beginning stood out from a very crowded field for its clarity, its insight and the depth of his reporting and his explication of the consequences of the collision between social media platforms, online extremists and American public discourse,” Kelly Lowenstein said. “You can see it in his remarkable book, his dispatches for The New Yorker, and in his commentaries after last month’s attempted coup at the United States Capitol. His work could hardly be timelier.”

During the discussion, Marantz highlighted the main theme of his book: “making the unthinkable, thinkable.” He explained his views that in recent years much of what mainstream media has come into contact with and reported on has been described as unthinkable, and getting at the core of how society has reacted to recent political turmoil, and how it got to that point, is important in understanding the often-volatile nature of civil discourse right now.

Marantz’s book analyzes and touches on the November election, the recent insurrection at the U.S. Capitol, and Twitter and Facebook’s banning of former President Donald Trump have all underscored the critical role misinformation distributed on social media platforms plays in our country. In the discussion, he alluded to the idea of free speech, and how many in the U.S. are utilizing it to justify much of the misinformation being spread online, in the news and in government.

“With speech, we’ve gotten really turned around because we’ve been implicated with this American-exceptionalist view that says that speech can’t have negative consequences, but that’s just obviously patently false,” Marantz said. “Nobody is truly a free speech absolutist, not all speech is protected, and if you were one you’d have to be okay with all sorts of really negative speech like pornography or yelling ‘fire’ in a crowded theatre. Everyone wants to draw lines, but the question is really where will those lines be drawn.”

Marantz alluded to his viewers that there are major issues that exist within many media conglomerates like Facebook and that these issues have fanned the flames of the misinformation and volatility that is present in current social media and news. He also discussed the fact that many governmental leaders enabling misinformation spread by the president and themselves has also contributed to the toxic culture of the current government and the news media on and offline.

Following the open discussion and addressing initial guided questions from Kelly Lowenstein, Marantz took questions from audience members in attendance. With many students in the audience, some in the multimedia journalism program, Marantz addressed questions regarding how student journalism and young journalists can make a difference, and what role college-age journalists will play in the future.

“Really what young journalists can do right now is to start working on how to fix the toxic environment we’ve created and really re-work the journalism business model,” Marantz said. “We have to reinvent local media, somehow make it profitable and convince people to fund it, and get a foothold in people’s attention and consciousness and do it in a way that isn’t just replicating old models, but inventing new ones. We’ve also just got to reinvent capitalism so that it doesn’t destroy us after we’ve rebuilt the model.”

Marantz’s discussion was the first in a two-part symposium series, and the second virtual discussion will take place on Thursday, March 25, 2021, from 6:30-8 p.m. on Zoom, and will feature GVSU multimedia journalism professor Vandana Pednakar-Magal, whose research focuses include journalism, global communication, communication policy and societal issues in the media. For more information and to register for the second discussion, visit the civil discourse webpage on the GVSU website.