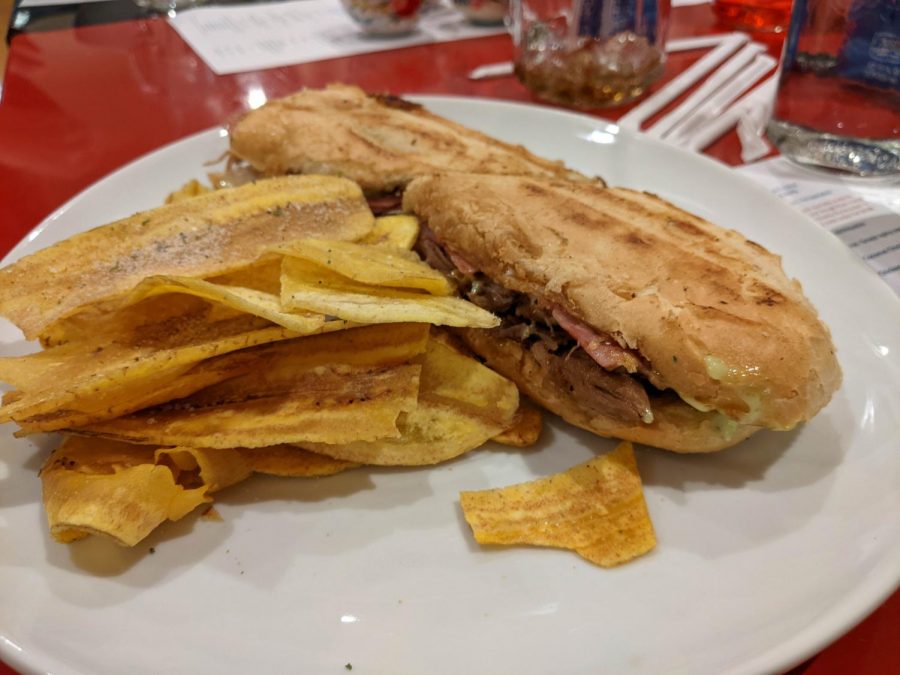 There’s something about just walking into Art Caribbean Fusion Cuisine that radiates excitement. From the splashes of colorful paintings to the hodge podge of primary colored furniture, the restaurant is vibrant and energetic with the food to back it up.

When we visited, my party made a reservation for indoor dining, which felt respectfully isolated and sanitary. But for those looking to eat outside, the sidewalk around Art is dotted with little dining greenhouses that seat a small party.

One of the only caribbean restaurants I’ve ever been to, I could only describe caribbean food as a medley of Latin bases with flair.

With no prior knowledge of Art, my eyes latched to the empanadas advertised front and center on their menu. It was a difficult choice, as the one-page menu was smaller, but obviously intentional and balanced, certainly warranting another trip back that would treat me to an entirely new experience.

To put it as bluntly as possible, the empanadas are the first thing customers read for a reason. Picking al pastor, salchiqueso (sausage and cheese), and chicken and jalapeno, the bowl of golden shells could have filled my stomach from the smell alone.

Melty, warm and crispy (courtesy of locally-made dough), the diversity of flavors and surprising heaviness of each empanada felt like I was being invited to know a family secret. I didn’t even mind that I couldn’t tell the empanadas apart before I bit into them — the satisfying reveal and full insides was rewarding enough. I was even skeptical that the three palm-sized pieces would fill me up, but I left feeling like a king.

Outside of the empanadas, Art Caribbean Fusion Cuisine shockingly punches up incredibly well against the brewpubs and Americana eateries that fill the downtown Grand Rapids area, all with one thing: the yuka fries.

Competing against crack fries and poutine, yuka fries — which are made from the starchy roots of the cassava plant — take crunchy flavor and kick it up a notch. While it may not be Midwestern traditional, these fries check all of the boxes. If you die by the crispy fries, you could devour a plate of these in moments.

If you’re indifferent, the side is worth ordering for the accompanying garlic aioli sauce alone. In a moment of food-induces weakness, I demanded that my party have this exact sauce available for my wedding, funeral, or some other event of that nature. We ended up even dipping everything from empanadas to plantain chips in it with resounding success, and wrote home about the cuban sandwich, which prominently featured it.

The finer portions of the meal came with the check — despite engorging myself with food, I paid less for fries, empanadas, drink and a healthy tip than I would have for a full entree at some other downtown restaurants. Between a great location and affordable eats, this place is an absolute gem for a quick college bite or a daring trip out to try something new.

But above all else, there’s something about the Art Caribbean Fusion Cuisine that feels homey — whether it be the bright atmosphere that uplifts patrons or the staff dropping off silky flan at tables after eating. It was a warm welcome to caribbean-inspired cuisine and a venture that will only become a downtown staple for me.