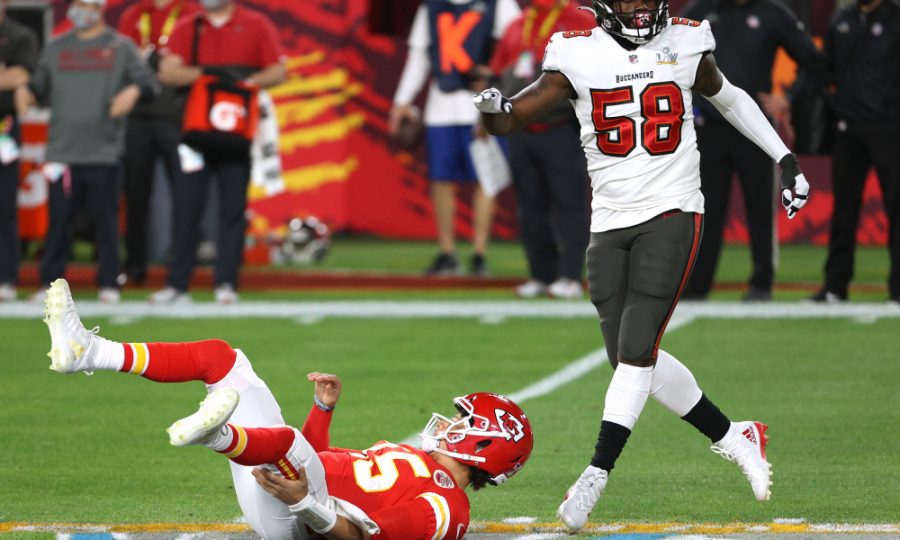 Through the first two and a half quarters of Super Bowl LV, it looked like the game was in the making for a classic. Patrick Mahomes and the Kansas City Chief may have rallied after being down by only eight points coming into the second half. Tom Brady and the Tampa Bay Buccaneers would have to answer and the game would go to the wire. This is not at all what happened however, as the Bucs thoroughly dominated the Chiefs, winning 31-9.

This Super Bowl was over very quickly. Brady’s touchdown pass to WR Antonio Brown sealed the game for the champion Bucs midway through the third quarter. The game featured a highly efficient Tampa Bay offense who were firing on all cylinders. Their defense was menacing all game and didn’t even give up a touchdown. On the flip side, it was an incredibly disappointing game from the Chiefs. Injuries, penalties, and an inability to block anyone in a Tampa jersey led to their defeat.

Brady now has seven championships. At the beginning of the season, NFL fans and analytics thought it was possible for the Bucs and Brady to win it all this year. It was never a given however. Brady was fantastic in this game. He was calm and poised in the pocket. He had some great downfield throws and absolute lasers into tiny windows. His offensive line helped keep him clean in the pocket as well, allowing Brady to wait for his receivers to get open and to dump out to his running backs after most of his receivers were already deep downfield.

The Buccaneers receivers were able to get wide open looks. Receiver Mike Evans, tight end Rob Gronkowski, and Brown all had huge catches. Gronkowski was perhaps the most impressive, catching six passes for 67 yards and two touchdowns in the Super Bowl, just one year after coming out of retirement. Brady and Gronkowski may have solidified themselves as the greatest duo in NFL playoff history. Brady finished the game with 201 passing yards, two touchdowns, and no interceptions.

It was nice to see one offensive on the field playing great. The Chiefs offense struggled all game. Their offensive line was shot and its backups were no match for the Buccaneers defensive line. Under the severe circumstances, Mahomes actually played pretty well. He was able to get away from defenders as they were immediately rushing him as soon as the ball was snapped. He also had some great throws, along with a few overthrows. Mahomes was hounded all game. If it had been any other QB than Mahomes, that person may have been sacked over ten times with that bad offensive line play.

It’s hard to talk about the Chiefs offense and not include the Bucs defense. They were so dominated up front with their pass rush that it was almost impossible for the Chiefs to get anything going through the air or on the ground. Even with arguably the best receiving core in the league, the Chiefs pass catchers were absolutely neutralized. Todd Bowles and his defense did an excellent job of limiting wide open looks and shutting down the middle of the field for Kansas City’s receivers.

Again, and this can’t be said enough, Tampa’s defensive line was the crucial key to the Buccaneers victory. The line recorded 29 pressures on Mahomes, a Super Bowl record. The line was also integral in limiting the Chiefs receivers. By pressuring Mahomes as soon as the ball was snapped, it allowed the Bucs secondary to play solid man coverage. It would be generous to say that Mahomes had a five second window to get a pass in. With that short amount of time, the Bucs secondary found it easy to slow down the Chiefs receivers.

The Chiefs defense on the other hand was extremely disappointing. They had a hard time generating pressure. Brady was left clean in the pocket most of the game. Tampa Bay’s running backs and offensive linemen were also crushing Kansas City’s defensive front.

This game was also riddled with penalties, almost exclusively on the Chiefs. Kansas City drew 11 flags in this game which started to crumble their defense. Their secondary plays extremely aggressive. It came back to bite them as they gave up huge chunks of yards by drawing pass interference calls and personal fouls. With all of these penalties, the Chiefs defense looked defeated. It was only a matter of time until things got out of control and the game slipped out of their grasp.

Kansas City did not look like defending Super Bowl champions in this game. They were undisciplined with the penalties. Their defense looked done midway through the third quarter. They didn’t play as aggressive as the Buccaneers. Besides Brady, Gronkowski, and DE Jason Pierre-Paul, Tampa Bay was supposed to be the inexperienced team. The vast majority of their players had very little playoff experience. They instead were poised, disciplined, and played like champions.