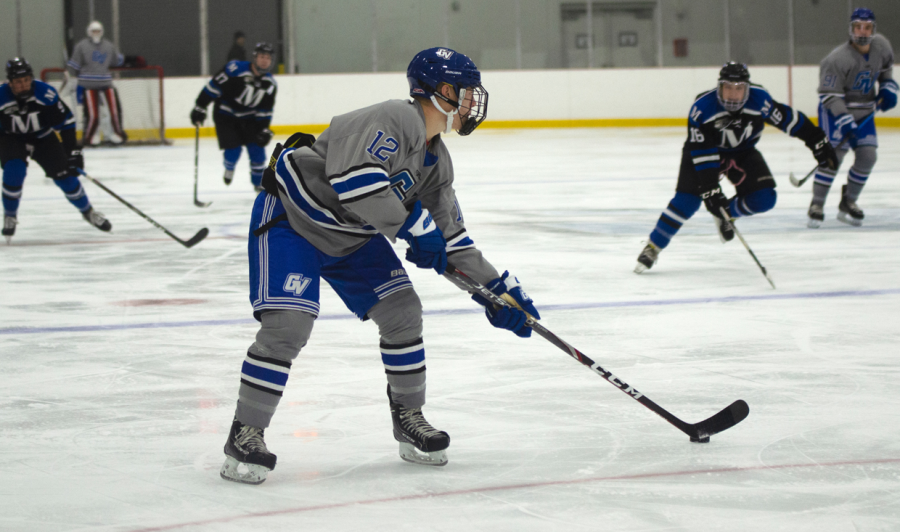 While some of Grand Valley State University’s sports teams have been getting their seasons back up into full swing again, the men’s club hockey team has been on hiatus for the past year while waiting out the COVID-19 pandemic.

As hard as it has been for student athletes to maintain their physical strength and motivation without competing in a season, the hockey team has had a strange and coincidental advantage taking this year off.

After last season, they made the jump up to the D1 league with an influx of new players. Now, they have nothing but time coming into the 2021-2022 season with a whole new group of guys ready to play.

Despite all of the obvious setbacks and disappointments that come with missing out on a whole year of playing, the players, as well as coach Carl Trosien, have kept their heads up and set their minds to the future. With a team made up of freshman and sophomores right now, Trosien is excited to be able to get the guys practicing together and getting to know each other.

“This was a perfect time for us to have a pause, have a year and reevaluate some things,” Trosien said. “We were able to sit down with the administration and Rec and Wellness and make some big overhauls to the hockey program.”

This season started off as an exciting leap forward for the GVSU hockey team as they were moved to D1. This news was then accompanied by some of the disadvantages caused by COVID-19. The rinks were closed for the first few weeks of the fall semester, only to open back up and close down again just five weeks later.

The guys have been working as hard as they can in the time that they have, but there’s no fighting the virus.

“School started, numbers blew up and that was the end of it,” Trosien said. “We had a positive test on the D3 team and a positive test on the D1 team. The protocols that were in place worked, so that’s always nice that the process works, and we were able to get things shut down in a timely fashion and take a break. I know more about infectious diseases than I ever wanted to, how about that.”

The inevitable swept away two extra weeks for the men’s hockey team, and because they’re a club team, they don’t have the advantage of getting tested every week like most other GVSU sports teams who are playing this season. Despite these limited practices and team bonding, this year has been harder than ever to keep the motivation up for both school and hockey.

“The disadvantages and the downside is just watching the kids suffer through it,” Trosien said. “We’ve seen a number of kids who are dealing with some of those mental health struggles that you hear about from nothing to do, no social life, no hockey, no competition. It’s not something I’ve seen a lot of over 15 years doing this. This year was different for sure.”

Regardless of what’s been stopping them from practicing on the ice as a team, the guys have been working harder than ever to maintain their physical strength when they can. Fifteen of the players are even traveling to Muskegon every week to work out with personal trainer and assistant coach Ron Clark.

With the vaccine starting to roll out in the United States, the administration has been more confident in the return of club hockey in October 2021, just in time for the guys to start showing their new division what they’ve been working on for the past year. Gage Thrall, sophomore team captain, has been excited to get to know his new teammates on and off the ice.

“It gives us a little more time to come together and understand how we all play and we’re able to practice more on what we need to practice on,” Thrall said. “Transitioning from D2 to D1 is a big jump in leagues, and we saw that last year playing some D1 teams. We now know where we need to be.”

The team is practicing on Tuesdays and Thursdays with each other as much as they can, and they’ve even joined the Club Sport Olympics where they play a different sport together each week. Thrall and his teammates are just looking forward to getting back to their regular routine of playing games every weekend and actually competing in the conference.

“Getting back on to the competitive side of hockey instead of just practicing all the time, and hopefully we’ll be able to get fans back into the rink by that time,” said Thrall.

Looking ahead, Trosien is also thinking about the big picture, two or three years into the future, thinking they’re going to be exceptionally prepared for game time. Because the team is so young as of right now, Trosien is hoping that this extra year of practice time will benefit them in the long run when they do have the older players on the team.

Despite the challenges and hurdles the men’s club hockey team has been through this season, they’re staying optimistic about their shot at next season’s conference, playing against some of the strongest teams in the country for the first time. This extra year of bulking up their skills and team relationships will serve them well when October rolls around.

“We’re well ahead of schedule, so next year the goal is that we have one of the strongest conferences in the country, and we expect to be right there,” said Trosien.