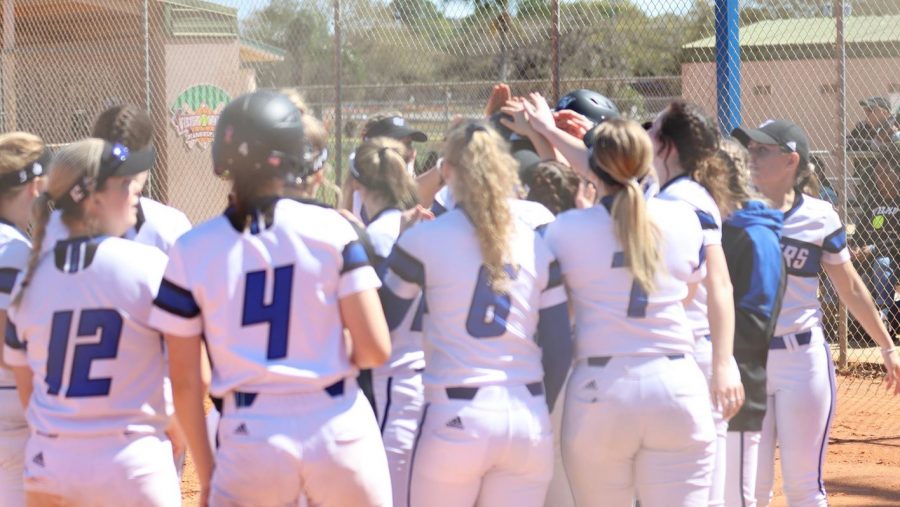 It’s been a long time since the Grand Valley State University softball team has been able to step back on the diamond and compete. Before the season was canceled in 2020, they seemed poised to have a successful year and were cut off with an 11-game win streak and a 13-3 record.

They will finally get back to playing on Feb. 20 at the Lewis Dome Tournament, entering with a preseason ranking at number 25 in the National Fastpitch Coaches Association preseason poll. The Lakers are returning a slew of hitters who all hit above .350 during their 2020 season—priming the Lakers to pick off where they left off almost a full year ago.

Junior Nikoma Holmen was among the hitters above the .350 average (.448 average, 2 HR, 17 RBI) and is a key returner for the Lakers’ batting arsenal. She was one of five Lakers to start every game her sophomore season and is eager to get back into the batter’s box and lead the Lakers to more success.

“My goal is just to trust myself and trust my abilities,” Holmen said. “The second I start to try too hard is the second things go downhill. After three years of being here, I’ve realized that I just need to trust myself and my team and do what I need to do for the team and not focus on myself. I’m just excited to see what this year brings, and I think it’s going to be really good.”

Another critical returning member on the pitching side for the Lakers is redshirt sophomore Hannah Beatus. Beatus was a force during their short 2020 season with a 6-1 record, 0.57 ERA, and 54 strikeouts in 49 innings for the Lakers.

Returning as well is sophomore pitcher Samantha Gehrls. Due to playing softball and basketball at GVSU, Gehrls was unable to appear in a game during the 2020 season. Gehrls was the No. 2 pitcher as a Freshman on the Laker team who finished third in the College World Series in 2019 — ending with a 10-2 record and a 3.49 ERA with 60 strikeouts in her 16 games that season.

Although it was tough that the Lakers were cut-short of their potentially special season in 2020, coach Dana Callihan and her team are just happy they finally are back on the ball field.

“The players are hungry,” Callihan said. “By our count, it’s been about 350 days since we last suited up. They’re ready, and they have wanted to play for a long time. They’re just hungry. We are just going to take it one pitch at a time, just like we have preached for the past years, and take care of business as it comes. They’re ready. They have been for 350 days.”

Through the long wait, the Lakers softball team have had to find ways to carry any momentum they could from the hot start a season ago. Beatus says nothing has changed from last year when it comes to what this team wants.

“The fact that we haven’t played in so long is such a motivating factor given that we were off to such a hot start before we got cut-short and the world was flipped upside down,” Beatus said. “ Every year it’s a new season with new faces, but that goal never changes, and that’s to get to that national championship and win that national title. Our biggest motivating factor for us is to never take any time we have to compete with each other for granted because it can just be taken away from you all so quick.”

Holmen echoed Beatus’s thoughts and is ready to show off a larger sample size than what they could a season before.

“Coming out of Florida, we were just getting started,” Holmen said. “We were just getting the wheels rolling, and I think we are going to use that momentum coming into this season. We didn’t get to show what we really had, it takes teams a while to get that chemistry going, and we had it in the beginning. We didn’t get to show that to everyone, and I think we will use that frustration from last year, and it will be driving us. Playing like we won’t get to play again.”

The team is prepared to make their run at a title this season and take advantage of their opportunity to get on the diamond. Beatus said the team has their goals in order and even has a mantra for the road ahead.

“We want to dominate the day,” Beatus said. “Whatever that might be for you that day, we are always trying to get one percent better and hit that goal. If each of us can take on the individual responsibility of that, then as a team, when we come together, we’re going to be in really good shape, and I think that’s something that has stuck with the team.”

The road to the national title will look a little different this year for teams around the nation. As of right now, it is still going to be competed for, but in a different format due to COVID-19.

Typically, there is an eight-team region at two various sites, then the winners of those sites come together for a super-regional. This year, there will only be one six-team regional and no super-regional, which will make it even tougher to get into the tournament.

“It’s the way it was when I first started coaching,” Callihan said. “The best teams are going to be there, and you just have to be ready for it. It changes the tournament, and it changes the outcome a little bit for some teams, but for the most part, our preparation won’t be any different. We take each game at a time, and no matter what team we are facing, our goal is to win. Take care of business on the front end, and take care of the daily situations, and the post-season will take care of itself, we just have to play the best ball we can play day-in and day-out.”

The team will travel to Illinois where they will kick off their season indoors on Feb. 20 against Lindenwood University. Then will play more non-conference games in March before starting GLIAC play against Parkside on March 25 at the GVSU softball fields.