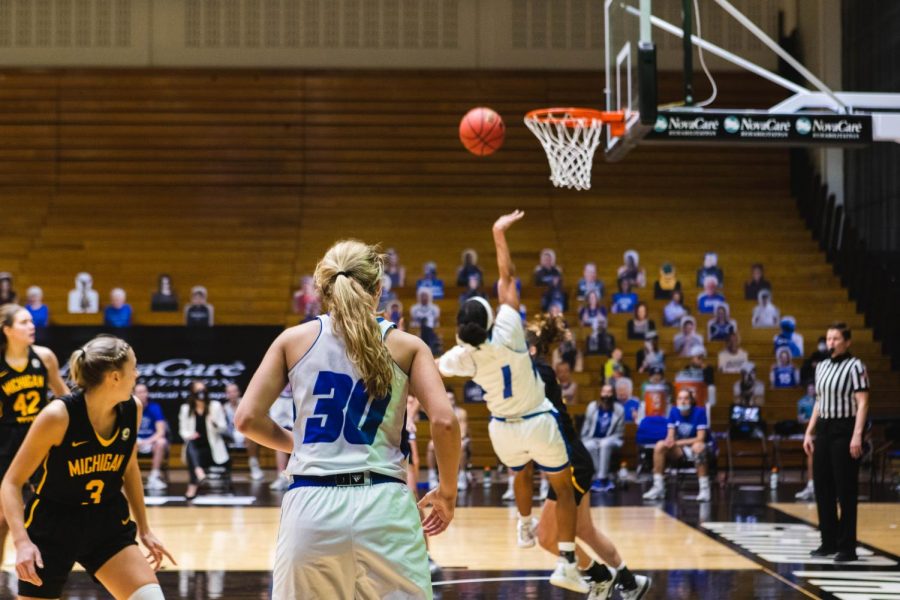 The score was neck and neck for the entire game and the closely-contested matchup came down to the wire. The Huskies scored a field goal in the last second of the game bringing the final score to 54-52.

This was a pivotal matchup for both teams as their seasons near an end. Going into the game, GVSU and Tech were tied atop the GLIAC standings for first place. Both teams started the weekend 13-1, but the Huskies walked away 14-1.

Senior guard Quay Stanton and freshman forward Riley Bisballe scored double digits by the end of the game with Bisballe at seventeen points and Stanton at ten. Spitzley scored seven points for the Lakers and had nine rebounds during the game.

The Lakers led the scoreboard throughout most of the first half, ending with a score of 22-23. In the second half of the game, the tension started to build both on the bench and on the court, and with a two-point shot in the last seconds of the third period, Stanton brought the score to 39-36.

“I thought we were good defensively until the last minute and a half,” said coach Mike Williams. “We just lost kids on defense. We made some plays, hit some shots, but at the end of the day we had a couple defensive breakdowns. That could be the pressure, not ever being in these moments before.”

An older team compared to the Lakers, the Huskies used their experience playing tight games and went on a 12-1 run in the last 2:46 minutes in the game and Ellie Mackay scored the last two points at the buzzer.

“I thought our decision making on offense had to get better,” Williams said. “The game got tight and our head went down. Tech’s got two senior guards and a fifth-year guard. Their veterans did a heck of a job down the stretch, controlling the game on both ends of the court.”

Next weekend, Feb. 26 and 27, the Lakers will be traveling to Northwood for their final matchup of the season, until March 2 when the GLIAC Tournament begins.