GV improv comedy team is back with the good, the bad, and the in-person performances 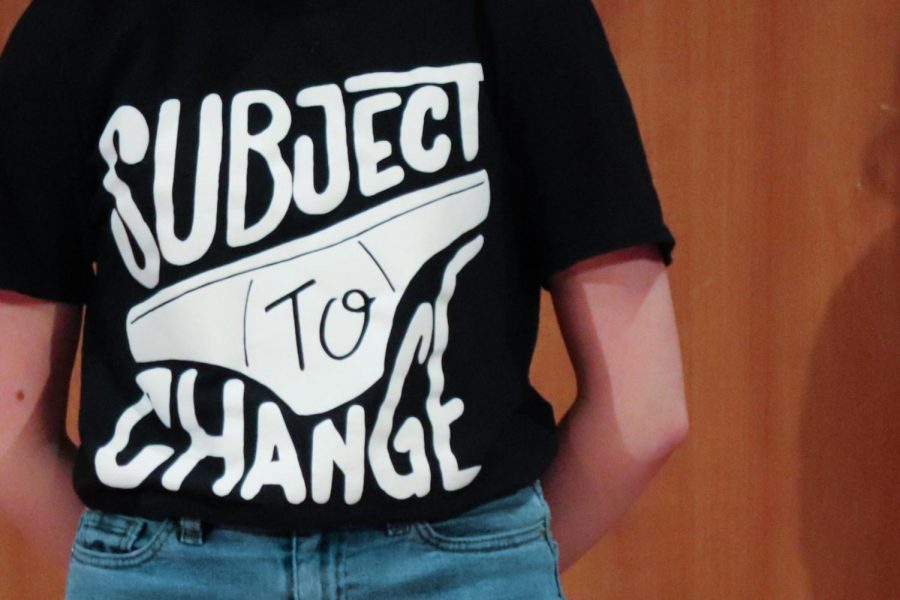 For the very first time since the beginning of the 2020-2021 school year, Grand Valley State University’s improv comedy team, Subject to Change, hosted an in-person show.

The team put on two separate shows in the Cook-Dewitt Center on Friday, Feb. 26., called, “The Good, The Bad, and The Improv.”

The night began at 7:00 p.m. with “The Good Show,” also known as the family-friendly show. Following this performance, “The Bad Show” took place at 8:30 p.m. and the content was, as implied by the name, not so PG.

“The Good Show” was an hour long show of improv games and scenes that did not contain sexual jokes, swearing, or drug references. President of Subject to Change, GVSU senior Leah Erben, said the comedy in this show was well suited for anyone to see.

Vice President of Subject to Change, GVSU senior Cole Curtiss, said “The Bad Show” was more unfiltered and some mature themes were up for grabs when it came to coming up with jokes on the fly.

“The audience could expect some more challenging vocabulary and subjects, but all in the nature of good fun and laughs,” Curtiss said.

Although this first performance back was a major milestone for the team, the group didn’t actually find 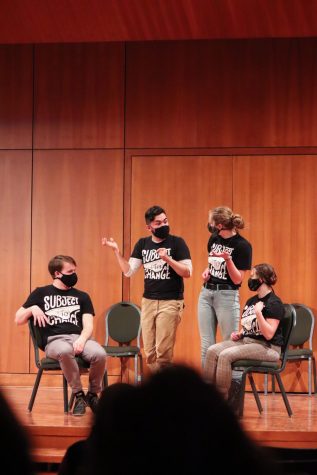 out they could do an in-person show until only a few weeks before they were set to perform.

Rehearsals for the team are typically spent doing a mix of skill-building and practicing specific games. During the few practices before the show, the group makes sure to discuss ideas for the show’s “theme” and logistics.

Curtiss said although things had to come together rather briskly, it was a smooth process because the group finally had their groove back.

“These pre-show practices are always the most exciting since it really feels like we’re working towards something,” Curtiss said.

Prior to the show, safety precautions were also put into place to ensure a fun, safe evening for everyone.

The Cook-Dewitt Center currently has a maximum capacity of 36 people, keeping the crowd small. While at the show the audience was seated six feet apart, and all GVSU students who attended the show had to have completed and passed their GVSU daily self-assessment.

Masks were required, and only four performers were allowed to perform onstage at a time. Absolutely no touching was allowed on stage, and Subject to Change members maintained distance throughout both performances.

Erben said that despite the restrictions when the time came the team was raring and ready to perform.

“I know our show was different from shows in past years because of all the restrictions, but the team was really excited to perform again because it’s what we love to do,” Erben said. “Our friends and regular audience members were excited as well, and I think everyone was looking forward to logging off of Zoom for once and getting out of the house.”

Both Erben and Curtiss said that not being able to perform live for so long had been challenging and that they were very excited to be able to do what they love in front of a live audience once again.

“Personally, performing comedy is one of my absolute favorite things to do, and not being able to perform live has been very sad,” Erben said. “Meeting in person allows us to really utilize each other’s energy and become much more comfortable performing together, and I’m thrilled to be back.”

Tickets for the show were $1 and could be reserved online prior to the show. Subject to Change hopes to continue putting on monthly shows in a similar fashion for the rest of the semester.

“Improv is really important to us and is a fantastic way to bring some joy and laughter to the GVSU community during a stressful year,” Erben said. “We are very excited to be able to do that again, and we hope we can continue to do it in the future.”