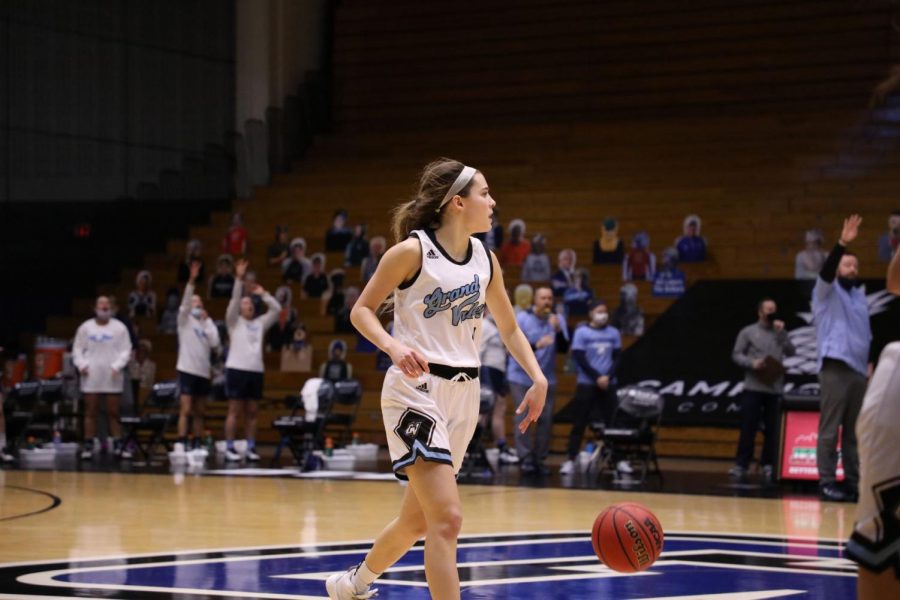 GVSU came into the matchup on a three-game losing streak. The Lakers lost to Northwood the day before, and had lost both games against Michigan Tech the previous week. With the GLIAC tournament approaching on Mar. 4, this game was their chance to end the regular season with a win.

“It was like a different team from yesterday,” said coach Mike Williams. “I thought we played with a lot of pop on both ends of the floor. Northwood is a really good team, and I think sometimes the second day has an effect on that. It’s tough going back-to-back in this league.”

The game started with GVSU finding open looks in the paint, something they struggled to do the night before. Senior center Kiri Tiemeyer and junior forward Hannah Kulas made several baskets early in the first quarter, giving the Lakers eight unanswered points to start the game.

GVSU grew their lead going into the second quarter with an 11 point run that highlighted their aggressive and efficient defense. The Lakers continued to force bad shots and turnovers with their play, and the offense continued to take advantage of Northwood’s drought.

By the end of the first half, the Lakers were up 41-21. Their defense in the second matchups of the series improved. They only allowed one more point in the entire first half of this game than they did in only the second quarter of the game before. Among the strong performances from the Lakers was freshman forward Rylie Bisballe with nine points, six rebounds, and an assist in the half.

The second half started off with the Lakers continuing to pressure the inside and take advantage of mismatches. A few minutes into the third quarter, Northwood found their groove going on an 11-point run of their own, but the deficit was already too wide and the Lakers led by 20 entering the final quarter of play.

The Lakers held the lead despite Northwood applying pressure across the whole court from the inbound pass to the shot. The change of pace was too little too late for Northwood though, and GVSU closed out the game with a 25 point margin.

“I’m not a point guard so it’s not as hard for me, but I think just being there for my teammates and being ready to set a screen or roll to the basket helped,” Bisballe said. “Coming into the season I didn’t know how much I would play. I was fine with whatever, but it makes me feel good that I can help my team.”

Bisballe ended the game with 13 points, nine rebounds, and two assists. Kulas also gave a strong performance with 15 points, two rebounds and three assists. Tiemeyer finished with seven points and seven rebounds, but her presence in the post helped carry the team to a hard-fought victory.

This win is a pivotal moment for this team, and they will enter the GLIAC tournament as the second seed under Michigan Tech, whom the Lakers lost to twice earlier this season.

Having secured the second seed in the tournament, they will face the winner of the Davenport and Northern Michigan game on Thursday, Mar. 4.