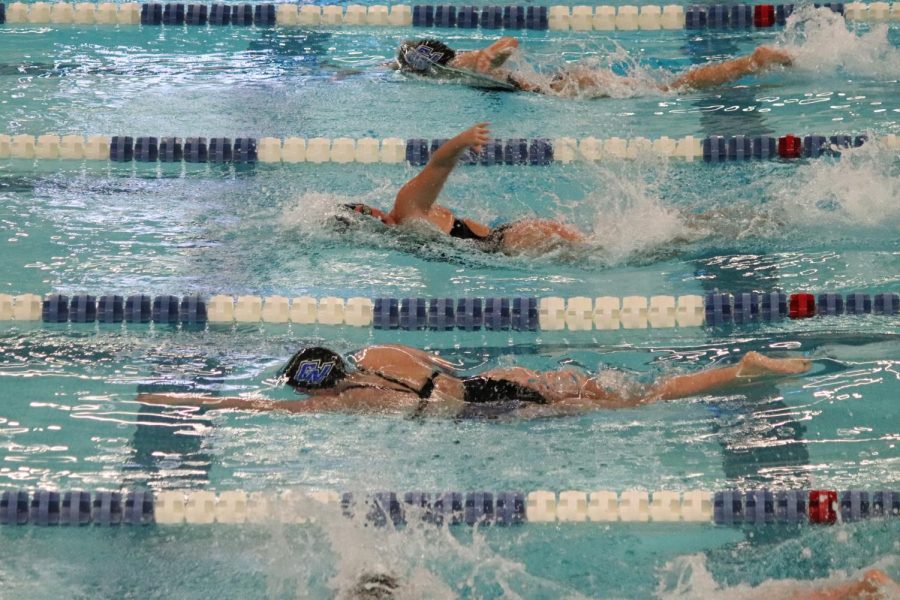 Both the men’s and women’s swimming and diving team at Grand Valley State University claimed a conference title in the GLIAC last week on Feb. 20. It was the men’s seventh consecutive victory at the GLIAC Championship Meet as they finished with a final score of 1,072.5 points, a GLIAC record. The women claimed their third title in the past six seasons. They also cemented their place in GLIAC history by scoring a conference high 1,200 points. They also had a record for the highest margin of victory, defeating second place Wayne State by 613 points.

“It feels pretty good,” said coach Andy Boyce. “We’ve had some close championship meets over the years but this one wasn’t like that. The players worked hard on getting better everyday and us coaches worked hard on recruiting these guys to be Lakers. The women have been winning every other year, we have three titles in the last six years. Hopefully next year we can start a consecutive streak.”

GVSU has been historically dominated in the GLIAC. This championship marks the men’s team’s ninth overall championship, all during Boyce’s tenure. Under Boyce, this marks the fourth championship for the women’s team.

For the 2021 tournament, both teams thoroughly took out their competition. They didn’t win every event however and it was never a sure thing that the team would outperform their competition by such a wide margin. The success that other teams in the conference had in some events pushed the Lakers even harder.

“We definitely thought we might have an advantage going in but you’re never sure,” said junior Jesse Goodyear. “Even though we have a history of winning in the GLIAC, we don’t win all the events every time. Some of them, like the relays, we don’t always win. It really gives us a kick in our backs to go in and compete.”

Going into this meet, the Lakers knew it wouldn’t be the same as in previous years. Like every other meet this year, the team had to compete without spectators. With COVID-19 delaying the start of their season, some people, like Goodyear, thought the tournament may not have taken place. Even while they had to wear masks and socially distance during the event, the Lakers were just happy to be competing. Without an audience, the team did what they do best, cheer and encourage their fellow team members.

“We knew that there wasn’t going to be spectators there,” Goodyear said. “We know we would lose a huge chunk of the atmosphere that usually goes into the GLIAC tournament. It was unfortunate. We just had to keep yelling and cheering for each other. We did a brilliant job. We were yelling so loud that it brought normalcy back to the event. We did the best we could have done in that situation.”

The GLIAC Tournament also featured the announcement of the conference awards for the season. The Lakers won every award for the year. After coming to a vote, Boyce alongside the other coaches in the GLIAC, were all awarded the Coach of the Year award. The coaches all agreed they would share the honor after a difficult season due to COVID-19.

“He was impressive,” Boyce said. “He had one of the fastest times ever in Division II in the 1000 freestyle. I’ve only seen it happen one time in the conference. Halfway through his 1000 freestyle, he was faster than everyone but one but in the nation.”

While the Lakers will celebrate their much deserved victory and accolades from the event, they are not done working quite yet. On March 17, the team will travel to Birmingham, Ala. to compete in the NCAA Championship Meet.