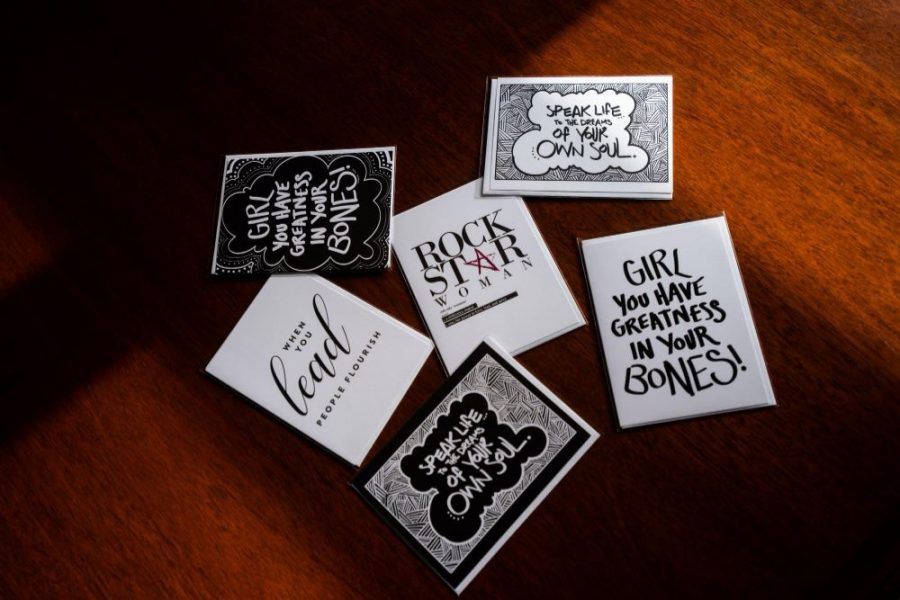 To quote one of her greeting cards, Grand Valley State University alumna and Detroit native Shannon Cohen decided to “start living at the intersection of joy and purpose,” — and she hasn’t looked back since.

After graduating from GVSU, Cohen became the principal of Shannon Cohen Inc. where she has a line of inspirational products called, “Tough Skin Soft Heart” (TSSH), runs a blog and podcast, and holds speaking events on encouragement, motivation and leadership.

TSSH includes stationery, stickers, mugs, a lookbook, two of her own books, and “affirmailtions.” Each card features something inspirational or kind, including phrases like, “Girl you have greatness in your bones,” “Speak life to the dreams of your soul,” and, “Growth looks good on you.”

Today, grocery stores, boutique shops and retailers throughout Michigan and 15 other states carry Cohen’s hard work. On top of this, as of very recently, 1,700 Target retail stores have taken on Cohen’s greeting cards where they will be prominently displayed through March.

Although she has succeeded in so many arenas, Cohen places much of her focus on everything that it took to achieve that success.

Graduating from GVSU with a double major in Political Science and Advertising and Public Relations, Cohen said she spent the first nine months after college with no job and no car because the

Government job she was offered was retracted because of 9/11.

Fast forward to 2009, Cohen went to grad school and worked a full-time job until she started a business where she did consulting work and began to work for the White House Drug Control Policy, later beginning TSSH.

“I started ‘Tough Skin Soft Heart’ as a blog,” Cohen said. “I started writing to talk about all of the difficult things the leaders I worked with were navigating behind smiles and hard faces. I gained 3,000 subscribers in the first year.”

Cohen then started to travel and speak until 2015 where she spoke at a Blue Cross Blue Shield event in Michigan and an executive came to her looking for more.

“She challenged me,” Cohen said. “She said, ‘Next time I see you, I want you to have a product and a book.’ So, I began learning a lot more about business and I’ve always loved handwritten cards. Encouragement is my superpower. I was always buying blank cards and writing love letters because no cards in the market said what I wanted to say.”

Cohen said although it was a challenging journey, it’s one that she is grateful for.

“I think about my journey of becoming, which is what I call it, and it has really been 20 years long, and I think that’s okay,” Cohen said. “That’s important to share. Some things look like an overnight thing and that’s not what it is. It’s truly a journey of becoming. Sometimes we get frustrated because we’re comparing our day one to someone else’s day 1,001.”

She said that the hardship she faced while building her business is actually what continues to motivate her the most.

“I think what inspires me every day is memories from my years in obscurity,” Cohen said. “This particular milestone of Target is really visible but what inspires me are those daily small acts of courage, consistency and resilience that it took to get here. Doing every pop-up, taking my 2-year-old to events, building a business in my basement. I’ve proven to myself that I’m not a questionable investment.”

Cohen’s tale of perseverance and determination is something that she hopes GVSU students can build off of as well. She said there are five main things she wishes to tell students.

First and foremost, Cohen said you must believe and invest in yourself prior to graduation.

“I think sometimes as students we get caught up in thinking what’s next is post-graduation, but what’s next can be seeded today,” Cohen said. “You can become an industry disrupter with a cellphone and an idea. Stop thinking about post-grad and start thinking about right now.”

Third, Cohen said to remember the present, but know that the future is important to build towards.

“College is about remembering that you’re living in your now but every day you’re living towards your next,” Cohen said. “Publish your paper on Linkedin, build relationships, reach out to the author of a book from class over Linkedin or Twitter and share your work. The people who used to be harder to touch are at home just like us. It causes hierarchies to be flatter — take advantage of that. People are more touchable now than ever because they’re at home.”

Fourth, Cohen said to build relationships with the other students in your classes.

“You never know where the other students will end up on the Earth,” Cohen said. “Future networks are in your classes. Build authentic, meaningful relationships with classmates. There are people I met in undergrad and grad school that I’m still deeply connected with today. The Laker Nation is strong. Reach out to people who are Lakers for a lifetime.”

Finally, Cohen said your most important supporter must be yourself.

“Root for somebody today — starting with yourself,” Cohen said. “I’ve been so hard on myself and so critical of myself. I think that’s what my encouragement for others is — to root for yourself, and root hard. Listen to the words you’re saying about yourself or your life, and speak life to the dreams of your own soul.”