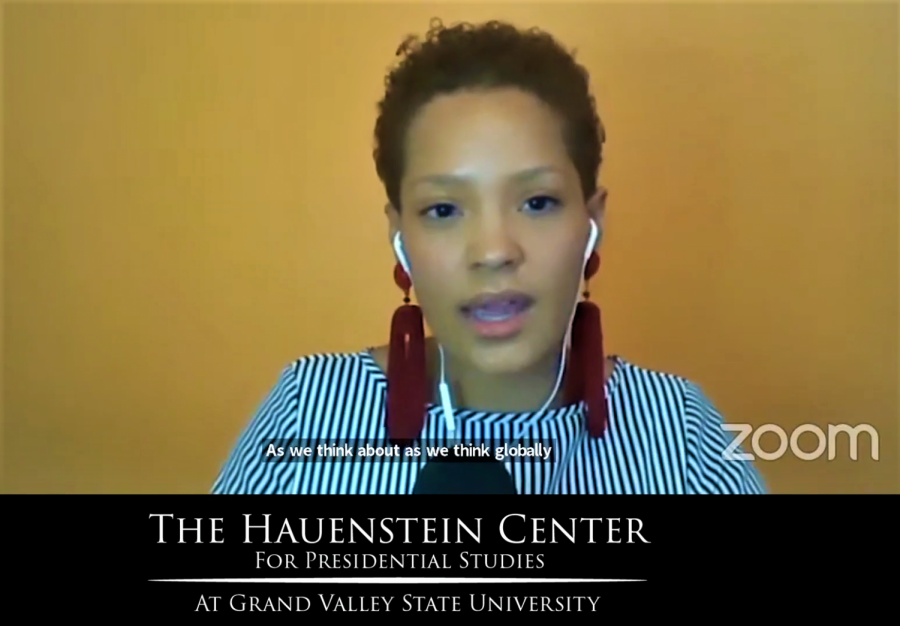 Kelsey Perdue is the Michigan project director of Kids Count, where she works to heal the larger community by advocating for better education policies (GVL Ysabela Golden)

Much of the programming at Grand Valley State University’s Peter C. Cook Leadership Academy revolves primarily around the 60+ students in its cohort, but their events hosting talks from community leaders are open to all. Such was the case with Kelsey Perdue, the project director of Kids Count in Michigan who was invited to give a virtual lecture on “Local Leadership from Global Experience.”

“There’s a global truth in this struggle of hunger and conflict and paranoia,” Perdue said. “We are all in the middle of this battle for justice, and as much as you may want to, you cannot excuse yourself from this fight. You might have heard the saying, that ‘no response is a response.’ Decisions will go on, with or without your direct input: decisions that cause our neighbors to go hungry.”

This isn’t the first talk Perdue has given at GVSU. In 2018, while working for the Grand Circus learning institute, she spoke at a TEDxGVSU conference about the fluidity of our social identities. Now, in 2021, she’s also a part of the Michigan League for Public Policy, the Grand Rapids Community Relations Commission and the Michigan Black Leadership Advisory Council.

“My work is in advocacy,” Perdue said. “I study and I speak up on political and economic issues, and often those issues have a tie to policy and to the law.”

Perdue was born and raised in Grand Rapids, a city her career has returned her to after years spent traveling abroad. Her time studying in Spain and teaching in the Dominican Republic only compounded lessons she learned growing up.

“Even as a little girl, I witnessed the divide between the haves and have-nots,” Perdue said. “I have seen people and communities under-resourced and disregarded, I’ve seen violence go unpunished, I’ve seen greed drive decision making. My global travels have really confirmed that the poverty, the illness, the racism that I first witnessed in my hometown.”

When Perdue left Grand Rapids as a young adult, it was to attend the historically-Black Howard University in Washington D.C., where she would initially work towards becoming a civil rights lawyer.

“But my first job as a college student was in a preschool program, and I loved it,” Perdue said. “I loved working in schools, with families, with the kids, and eventually I knew that was what I wanted to pursue. I also knew that education is considered the great equalizer, the gateway to equal opportunity.”

As Perdue pursued a career in education, however, she noticed that the problems she saw often rooted back to the policies and systemic inequalities that she had studied as a law student.

“In 2010, I broke down that one second of spending from the U.S. Department of Defense was more than one early childhood teacher made in an entire year,” Perdue said. “Where our priorities lie, our budget follows.”

She notes that though nearly everything we do is political, and that you can never discount the work you’re doing locally, whether in community organizing or simply within your family.

“In a global society like the one that we are in today, with the world economy and connected social movements, how we lead and what we do right now matters,” Perdue said. “And it supports what’s possible not just here, but elsewhere throughout the world.”