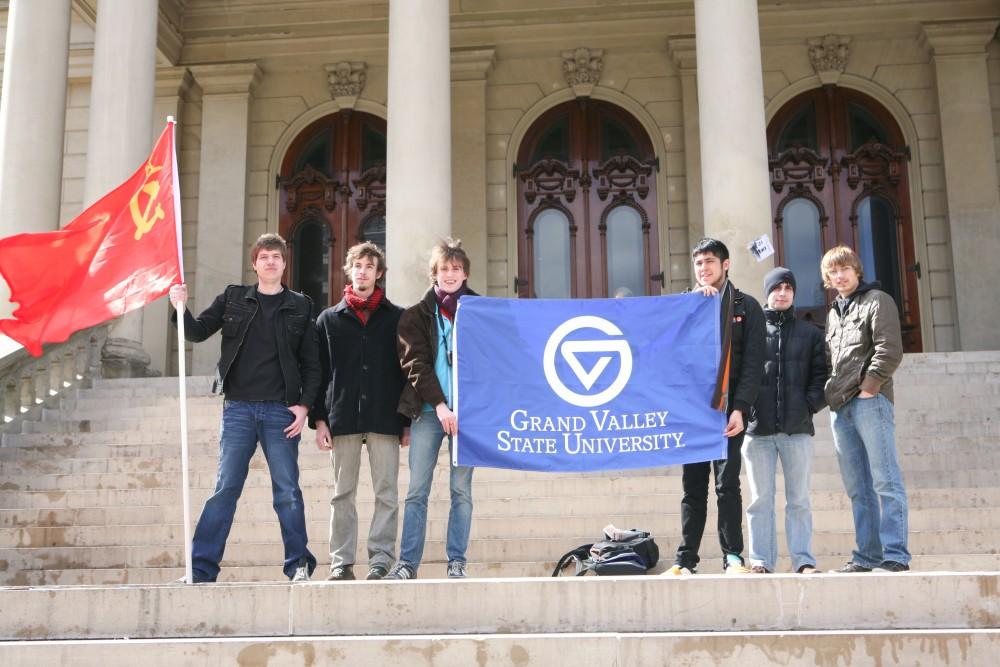 A group of Grand Valley students on the steps of the Capitol Building in Lansing, protesting lower funding for higher education

testify virtually at a legislative panel in Lansing. This testimony took place during a meeting of the Higher Educations Appropriation subcommittee of the Michigan House of Representatives.

Mantella was joined by Trustee Susan Jandernoa and Student Senate Vice President Joel Pagel. Each representative had a different important point to make before the panel.

“The goal for the meeting was for the House of Representatives to walk away with a stronger view of what Grand Valley contributes to the state, its economy, and to the people we serve,” said Mantella.

Mantella also said that she received a lot of positive feedback from other participants and people who observed the event. The main points that the representative team brought up helped achieve that goal.

The three main topics that they focused on were GVSU being an asset to the state, how much the state needs that asset right now, and how the university could be the strongest return on investment.

Joel Pagel, the Vice President for External Relations of Student Senate, provided the student perspective for the meeting. He hit on many of the same points that Mantella did.

“Grand Valley is one of the freshest universities, one of the youngest universities, with one of the biggest impacts especially in West Michigan,” Joel said. “During the testimony, I talked about the Laker Effect, what it can offer, and our retention/graduation rates just among our campuses. They’re among the very best.”

Pagel also spoke about the challenges of paying for the university as a student when state appropriations fail to keep up with the rising costs of education, which leads to a rise in tuition.

“I know that I’ve certainly enjoyed my time at GV, and I think with more funding we could open up that opportunity to future Lakers and hopefully expand higher education in general,” said Pagel.

He said he wanted to drive home the point that students can do anything they put their minds to. Especially being involved in a campus community, students have the ability to make an impact and change the world around them.

The three main points that Pagel said that he felt were the most important to make were educational excellence, job preparedness, and students becoming more civically engaged. GVSU has many resources for students to take advantage of in order to continue these goals.

Trustee Susan Jandernoa, vice-chair of the Board of Trustees, was the last representative to speak. She discussed how lawmakers and trustees need to follow the constitution, which emphasizes education and the state’s need to fund it.

Jandernoa pointed out that when education is a priority, more students will attend college and an increase in college graduates will improve Michigan’s economy.

This hearing was conducted on budget recommendations for fiscal year 2022, which was proposed by Governor Gretchen Whitmer last month. If accepted, it would increase appropriations to universities by 2% in the upcoming year, but withdraw the increase the year after.