Through the Eyes of a Woman: Women share their lives through fine arts 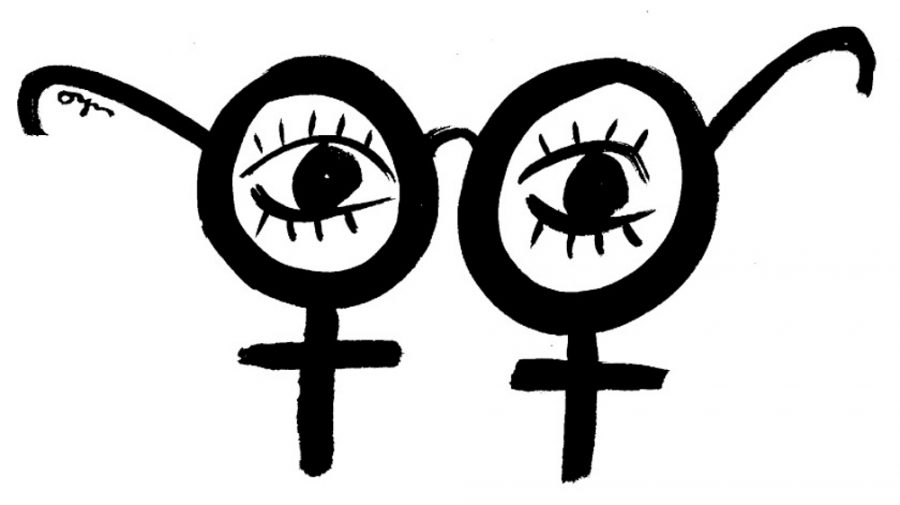 Half of the population sees life through the eyes of a woman.

This does not mean that the lens of the female gaze is lost to men. In fact, everyone is given a way to see the stories and experiences of our sisters, daughters, wives, mothers, aunts, girlfriends and grandmothers through the fine arts and the women that create them.

One of the ways women are best able to visually translate their experiences is through artwork.

Assistant Curator of the Grand Rapids Art Museum (GRAM), Jennifer Wcisel, said that although women’s artwork has been undervalued in the past, their artistic voice is essential to conveying the female experience for the world.

“Every individual brings a unique perspective and voice and way of looking at things,” Wcisel said. “In the past, half of the population was discouraged from expressing themselves through art. We as human culture, collectively, were missing out on half of the experiences of humans across the world.”

She said while many well-known female artists have a gift for portraying the experience of motherhood and the conceiving and bearing of children in their artwork, many others use their artwork to stray away from the female experience they live every day.

“Some female artists have no interest in creating ‘female art,’’’ Wcisel said. “Gender doesn’t matter to their expression of their work.”

Wcisel said that although women have been underappreciated in the art world in the past, many institutions today are attempting to reconcile this by curating exhibits with equal representation of male and female artists and revamping their collections to make them more diverse.

“Everywhere, museums and major arts institutions are actively trying to course-correct,” Wcisel said. “I know I have looked at the history of exhibition programs here at GRAM and figured out how many solo exhibitions we have done of women artists, and through this, we’re actively trying to improve those numbers.”

Women have also left an incredibly bold mark on the written form of artwork: literature.

Corinna McLeod, an English professor at Grand Valley State University, said the very first known author was a woman named Enheduanna — a princess, priestess and poet in Sumeria (circa 2,300 BCE). She said while it is important to learn Enheduanna’s name, it is even more important to recognize that millions of women have come after her and into the world of literature despite cultural barriers.

“There have been countless women writers, known and unknown, in the thousands of years since Enheduanna,” McLeod said. “But when we think about the impact women make when it comes to literature, we have to think about literature as it emerges around the world.”

McLeod said in many cultures women were forbidden to practice the art of writing, and in others, women couldn’t get access to any formal education. If women did learn to write, publishing work and becoming “public” was considered shameful or indicative of loose morals or madness — even in the western world.

Despite overcoming these barriers, women that do have the ability to write and publish works have still had to put up a fight.

“The most influential authors are often male,” McLeod said. “Male authors still dominate textbooks and ‘the canon.’ Anthologies have to intentionally and consciously include female writers — not because there are few women writers, but because their works, considered minor because of the sex of the writer, have gone out of print.”

McLeod said oftentimes female writers have had to write under a male alias for their work to receive the recognition it deserves.

“Female authors have long used male pseudonyms to get published like the Bronte sisters, or have used initials as a ‘gender neutral’ nom de plume because the thought is that a male name can appeal to a general audience while a female name restricts audience,” McLeod said. “J.K. Rowling is one famous — and recent — example of a woman author intentionally disguising her gender. There are many others.”

Kathleen Blumreich, a medievalist and professor of language and literature in the English Department at GVSU, said it is becoming increasingly important to read women’s literature and to listen to the voices that were silenced for so long.

“I think (women) have given voice to experiences that are often marginalized,” Blumreich said.  “They’ve allowed us into a world that’s often marginalized or deemed unimportant or irrelevant because of the golden standard set by men in society. Typically, men have been the ones with the access to means of publication and the male experience has been viewed as a universal experience, and it simply isn’t.”

Both McLeod and Blumreich said many people are attempting to remedy this silence by teaching more works written by women, and that it’s essential to do so in order to continue their legacy.

“We are increasingly aware of the ways women — and particularly BIPOC and non-European women — have been silenced,” McLeod said. “More and more people are seeking to rectify this by teaching their work, pushing to get their work back in print and deliberately seeking out a variety of cultural perspectives to publish.”

Ashley Shannon, Unit Head and associate professor of GVSU’s English Department, said this diversifying of voices in literature is essential because it allows the reader to feel understood and recognized.

“With the emergence and acceptance of women writers, women readers could see their wide range of lived experience reflected in literature,” Shannon said. “Of course men are capable of writing female characters, just as women are capable of writing realistic male characters. But the ability to self-represent is a powerful one, and the more voices literature expands to include, the better.”

Another form of the fine arts that is currently seeing more diversifying than ever before is cinema and the theatre.

Julia Mason, associate professor in the Women, Gender, and Sexuality Studies Department at GVSU, said women today have been able to play a major role in contemporary popular media by creating female characters that are full, rich and complex instead of the narrow female stereotype.

“I think women across popular media have had a prominent role in changing and challenging some of the narratives,” Mason said. “They want to talk back to some of those dominant narratives which position women as objects to be looked at and say, ‘Look, we’re more than that. We’re complicated, we’re interesting, we can be the anti-hero, we can be the superhero, we can be the President and the CEO,’ and all of those things.”

Mason said that although previously, most media was created for a dominantly white, straight male audience, it is slowly becoming more and more diversified — and people love it.

Allison Metz, an associate professor of theatre education in GVSU’s Department of Music, Theatre, and Dance, said studies have shown that every year there seem to be more women working professionally as designers in the theatre and that they continue to expand into other roles.

Metz said the more female representation is included in the theatre, the better it could become for life beyond the stage.

“I think that the more voices that we hear in this art form in terms of creating pieces, the better the theatre is going to be,” Metz said. “If theatre is a reflection of the human condition in the most general of ways, and if we can create more equitable reflections in theatre form, there’s a chance we can have more equitable conditions in humans.”

A visiting professor at GVSU in the Film and Video Production Department, Spencer Everhart said that while continued efforts towards representation on stage and on screen must be made, those same efforts must be put towards equality behind the scenes.

“I think one of the best ways to move forward is to understand that while on-screen representations of women are important, there must also be efforts for representation off-screen and behind the camera, in writers’ rooms, on set crews,” Everhart said.

He said that placing the burden of change on the movies themselves can only take things so far if there is still a lack of women serving in essential positions of control and expression within the industry.

“Expecting changes on the art and culture side to result in a substantial change on the industry and structure side is a long waiting game, and the time for change has been long overdue,” Everhart said. “Enormous strides have been made, especially in recent years, but there is still much work to be done. Transform the industry and structure and the art and culture will follow.”

A place where women have been making continual strides towards furthering representation on and off-screen is the music industry.

Icons like Beyoncé and Taylor Swift have paved the way for many women in the music industry, but much progress has yet to be made.

Lindsay Lou, a singer, songwriter, musician and performer who grew up in the Upper Peninsula, said the main way she has made a place for herself in the ever-changing music industry has been by creating an intimate bond with herself and recognizing how her own subconscious habits may be holding her back.

“There’s this book I remember seeing called ‘The Confidence Code’ and it’s about what women should know about the art and science and self-assurance and it had all sorts of interesting statistics in there,” Lou said. “In the book, it said men are likely to apply for a promotion even if they think they’re only 60% qualified and women have to feel 100% qualified before they do. I think that mentality seeps into our subconscious.”

Lou said learning to recognize this mentality playing out in her actions has been a major step forward.

“Learning things about myself like how to interpret my behavior has been important for me,” Lou said. “It’s things like recognizing times where I don’t want to take a solo because I think I’m not qualified, when in reality, I just have to take a solo and take another solo and another because I can do it.”

Finding her voice through this process is something that Lou said she hopes all-female artists can do for themselves.

“My experience I think has been a series or a practice of trusting myself and trusting my voice and just being able to hone in on being a leader,” Lou said. “My job is to realize my power and to realize the bags that it comes with. It’s knowing how to wield it without shame and carry responsibility with it.”

Lou said the efforts of some women to reclaim their power and their recognition in the world helps to make a path for all women, and that the only way to go from there is forward.

“We are constantly showing up for each other in every decision we make and everything we do,” Lou said. “When we show up and put all of ourselves out there without shame, with our whole heart, I think it lets other people who are listening know that they’re allowed.”