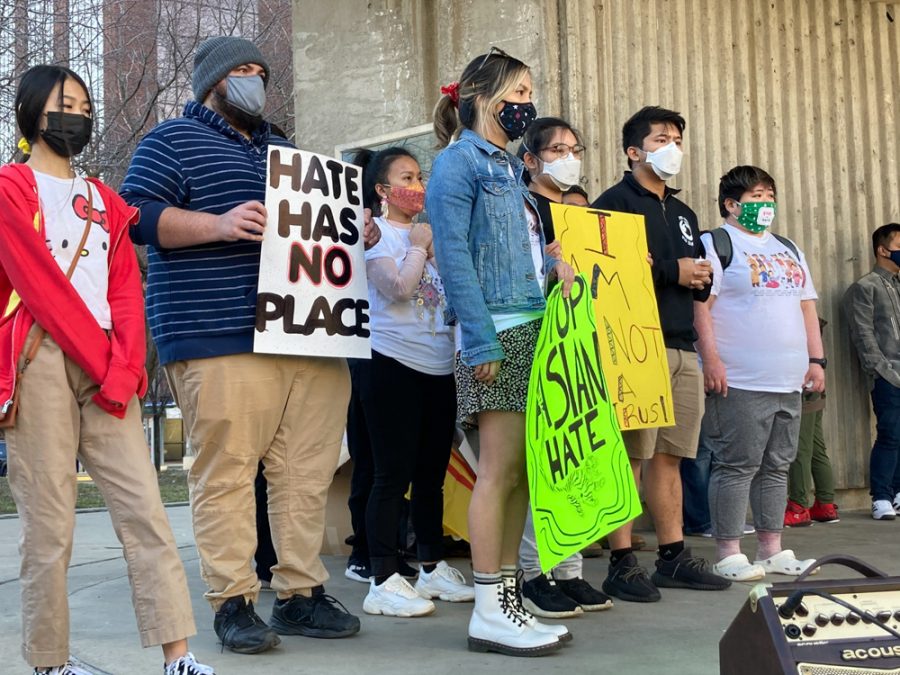 In the wake of a deadly shooting that took the lives of eight people, including six Asian American women, people across the U.S. are raising awareness of stereotypes and violence against Asian Americans and Pacific Islanders (AAPI), which has been on the rise since the COVID-19 pandemic began.

GVSU is no exception to this response. On April 17, students received a statement from President Philomena Mantella recognizing the allegedly racially-charged motives of the shooter and condemning Anti-Asian violence.

“(Mantella) made clear that the GVSU community condemns those acts as reprehensible and contrary to the values of our university and each member of our community has a responsibility to interrupt and address hate when it shows up,” said Senior Inclusion and Equity Officer Connie Dang.

“It meant a lot to me to know that the president of my university acknowledged the Asian minority on campus,” Doan said. “It also showed me that as an Asian American, we are not being ignored and that our feelings surrounding this issue are valid.”

Marian Reid, President of the Asian Student Union (ASU), was critical of the university’s response. As this recognition is necessary and finally bringing light to events that have been occurring for much longer than these past few months, it all still felt socially motivated, Reid said.

“When President Mantella released the statement regarding AAPI hate in general and in regard to the fatal shootings in the Atlanta-area, I knew it was sent with good intentions,” Reid said. “To post and address these issues now rather than throughout the pandemic as reported violence against the community has risen tremendously seems to defeat the true purpose of these forms of social support. It should not take a dramatic act of racially motivated violence to bring these thoughts and opinions forth.”

In addition to the statement, Dang said that she reached out to Asian student organizations she advises to offer support.

“I’ve sent out a personal email to the student groups I work with to check in with each student, offer support, and invite student leaders to co-host a Care Space for all AAPI students,” said Dang.

Partnering with the ASU, VCA, the Asian Faculty and Staff Association, East Asian Studies, Office of the Vice President of Inclusion and Equity, and University Counseling Center, Dang organized a Care Space that will take place on March 29 at 7 p.m.

“I think during this time, it’s so important to have a space to talk about how students feel, and to share, process, discuss, and heal from the anti-Asian violence and acts of racism,” Dang said. “Importantly, a variety of resources will be provided to help support students during this challenging time.”

The University Counseling Center (UCC) also responded to the tragedy by gathering resources for the Asian community, racial trauma, management and self-care.

“In the aftermath of experiencing or witnessing racial injustice and violence, one can experience a range of feelings and emotions, such as shock, fear, sadness, anger, grief, helplessness, and/or guilt,” said UCC Group Therapy Serviced Coordinator Abraham Eapen. “We encourage you to contact our office if you, or someone you know, would like support with coping and healing.”

Reid encouraged GVSU’s AAPI community to join the ASU in their mission to support each other and enact change on campus and in their communities.

“The voices of all ASU members will be needed to create the change necessary to ensure the AAPI community has a safe and supportive environment not just within the club, but throughout Grand Valley,” said Reid.

Additionally, Reid asked that the GVSU community as a whole to support and care for AAPI students by disrupting hate, discrimination and racism.

Dang said that there are a number of ways the GVSU community can take action to stop AAPI hate, including talking about race and racism, doing Hollaback bystander intervention training, donating to an organization like Asian Pacific Fund, advocating for expanded civil rights protections and supporting local Asian-owned businesses.

“It has been a challenging and difficult time for AAPI students, but I want them to know that they are not alone and that there’s a Laker community here to support them and advocate on their behalf,” said Dang.