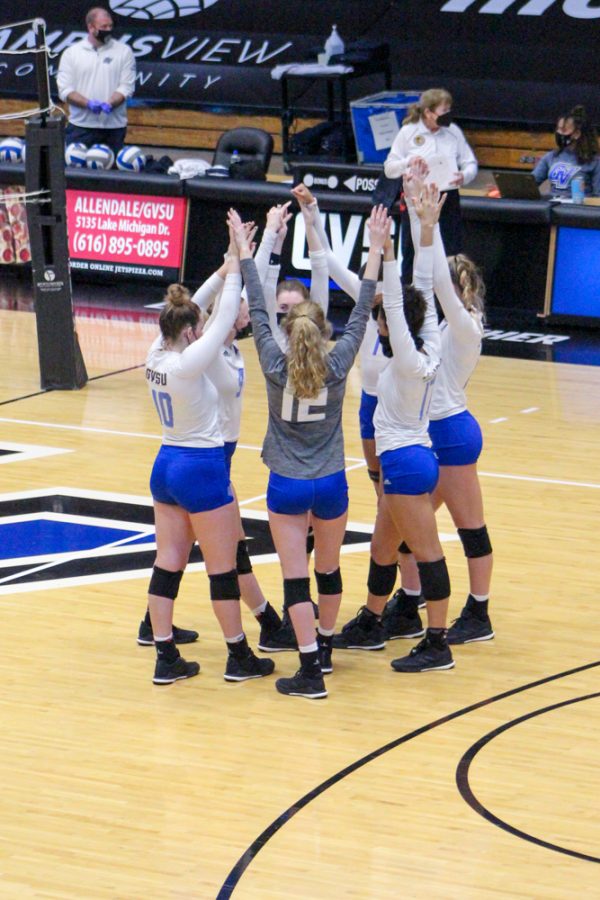 Grand Valley State University’s volleyball team (9-3) took the floor at home against conference leader and rival Michigan Technological University (8-1) for another doubleheader weekend. The Lakers dropped their Friday match to the Huskies 3-0 in a fierce battle. In that matchup, all three sets were decided by 5 points or less.

The second match was like the first. The match ended up going to five games as both teams battled back and forth. GVSU took the first set 26-24 and dropped the second to tie at 1-1 with the Huskies. The Lakers then moved on to win the third set 25-18.

As soon as GVSU got some separation from the Huskies, Tech answered right back in the fourth set to even it up at 2-2. The Lakers then took an intense fifth set 15-13 to seal their victory 3-2.

After dropping the first match 3-0, head coach Deanne Scanlon knew her girls would learn from their mistakes and come back on day two with a will to win.

“I think our team has had a pattern all season long,” Scanlon said. “On day two they take the lessons they learned from the match the night before and they make changes and adjustments and we have probably played our best volleyball on day two.”

Scanlon also noted the bench for the Lakers, who were on their feet and cheering nonstop the entirety of the night in support for their teammates.

“It’s been them all year long,” Scanlon said. “We say they are the seventh man and it’s because they are. It’s hard to keep your energy level up that whole entire match but they’re into supporting their team whether they are playing or not playing. Some of those kids haven’t played all season long, but that’s what their role is on this team, to build a great culture of appreciating what everyone’s role is. Everyone is vital and important. It’s not just the starters on the floor, it’s every little thing that everyone does to make us better and you can’t deny that the bench is the thing that drives us and makes a better.”

Abby Graham had a huge day for the Lakers, coming in with 23 kills along with 20 digs, coach Scanlon spoke highly of Graham’s stellar performance.

“She came up huge for us,” Scanlon said. “She has got a great vision of the court to see what’s open and what they are giving her. She had some nice hard kills, but she also did a lot of finessing them, she knew right where the open spots were at the right moments.”

Also coming in big for the Lakers on the attack was Thompson and sophomore Jaelianna Primus. Thompson had 16 kills for the Lakers and Primus chipped in 10. Sophmore Rachel Jacquay led the way for assists with 59 on the day for the Lakers.

Defensively, Jayla Wesley and Wight led with nine blocks each and Primus added in eight herself. Thompson also helped out on the defensive end with 30 digs while Kucharczyk added 24 as the libero for the day.

The Lakers will now travel to Indiana next Friday, April 2, and face off against Purdue University Northwest for their final two games of the regular season before they enter the GLIAC tournament on April 8.